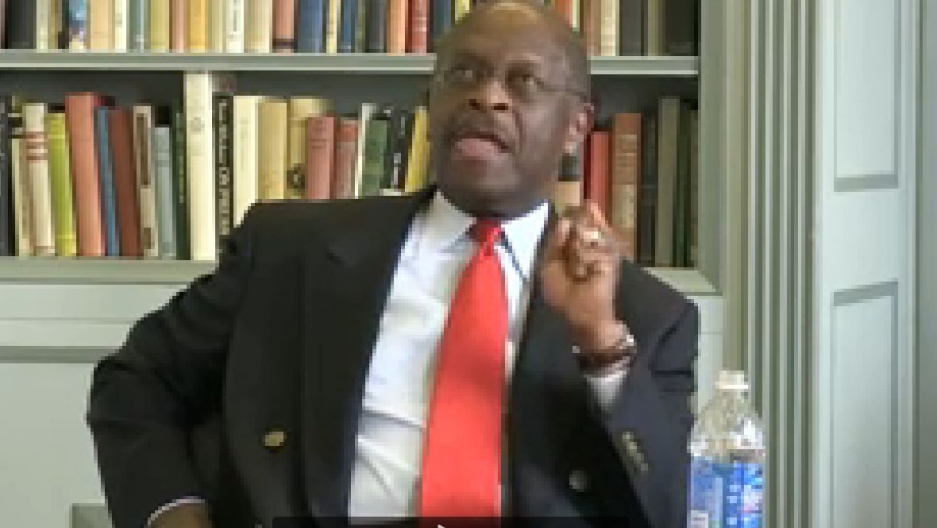 It turns out, when Herman Cain said the majority of Muslim Americans hold extremist views, he didn't mean "Americans" as in Americans. Not at all. What he really meant, his campaign spokesman has clarified, was Muslims from some other country.

Cain, who is running for the US Republican presidential nomination, said in an interview with GQ Magazine published Monday that he believes most Muslims in the United States are extremists.

More from GlobalPost: Cain: Most Muslims in US are extremists

"I have had one very well known Muslim voice say to me directly that a majority of Muslims share the extremist views," Cain said in the interview.

He was then given the chance to clarify his statement, asked directly if he agreed with this "Muslim voice" and if he was referring to the United States. On both points, Cain said yes.

"But you're believing it?" interviewer Chris Heath asked Cain.

"Yes, because of the respect that I have for this individual," Cain responded.

Another interviewer Alan Richman said to Cain: "Are you talking about the Muslim community in America? Or the world?"

After the interview as well as a video showing Cain confused over questions related to Libya were published, the candidate's campaign came out to explain why Cain made such offensive remarks and looked -- according to critics -- unqualified to be president of the United States.

On the Muslim issue, despite the transcript of the interview, Gordon said Cain meant Muslims in some other country.

“He doesn’t believe most Muslims in America have extreme views,” Gordon said.

On the Libya issue, Gordon said Cain's less than impressive response was a result of a lack of sleep.

“We were all going on four hours sleep, so he was tired,” Gordon told the Times. “When he got the Libya question, it took him a while to get his bearings on it, but he got the answer right.”

DISCUSSION: Does the argument that Cain was referring to extremist Muslims in some other country make his comment less offensive? Leave your thoughts in the comments section below.