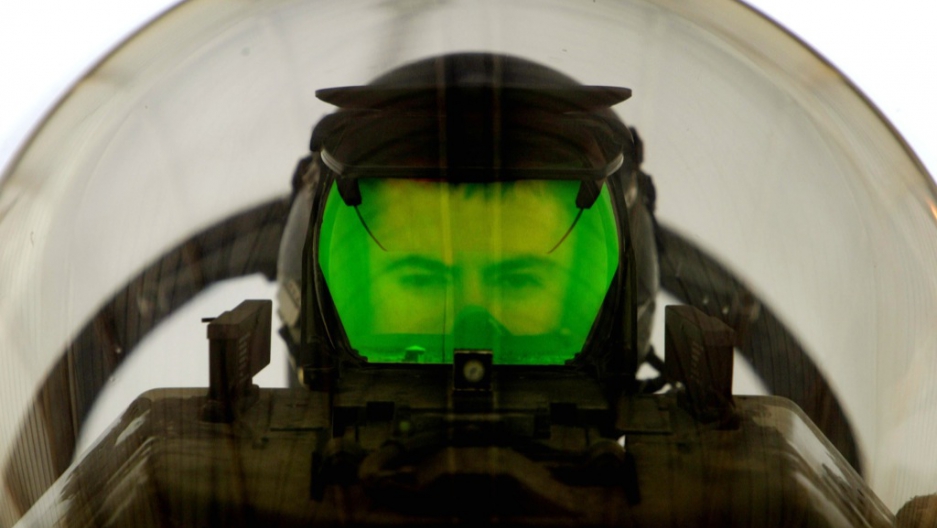 A U.S. Air Force pilot looks through the Heads Up Display (HUD) of his F-16 "Fighting Falcon" as he prepares to deploy on a mission April 2, 2003 at an air base near the Iraqi border.
Credit: Ian Waldie
Share

[Note: President Barack Obama arrived in Australia on Wednesday on a twice-postponed visit and confirmed plans to increase the US military presence Down Under. GlobalPost reports: G'day Mr. President — Barack Obama lands in Australia]

BRISBANE, Australia — When President Lyndon Baines Johnson went looking for more support for US military escalation in Vietnam, newly installed Australian Prime Minister Harold Holt announced that his country would go "all the way with LBJ."

The slogan had appeal in late-'60s Australia, which at the time subscribed to the American concern about the rapid spread of Communism should South Vietnam be overtaken by the communist North.

Ever since the British ceded Singapore to the Japanese in 1942, Australia has sought protection from perceived aggressors to its north, particularly Indonesia — the world's most-populous Muslim nation, situated less than an hour's flight from Darwin.

Having provided military support for all major US-led campaigns this century, including Korea, both wars in Iraq, and — despite widespread public opposition — Afghanistan, Australians could be forgiven for thinking that they've been going all the way with LBJ ever since.

When a report emerged on Nov. 11, Veterans' Day, that President Barack Obama might soon announce a new, permanent US military base Down Under, reactions ranged from sullen resignation to outrage to tacit approval.

Citing "heightened concern about China," the Sydney Morning Herald newspaper wrote that the US would establish a Marine Corps in Darwin, in the country's far north. Obama would make the announcement during an official visit to Australia this week that includes a stopover in Darwin, the first by a US president.

‘‘On any specifics of what I may announce with President Obama when he’s in Australia, we’ll leave that to when we’re in Australia," she told reporters.

Defense Minister Stephen Smith said: "There are no United States bases in Australia and no proposal for such bases."

While it remains to be seen what Obama will say when he arrives on Wednesday, observers agree that US interested in shoring up its military in Australia is strong, and there's little doubt as to the reason why.

"This is all about the rise of China, the modernization of the People's Liberation Army and, particularly, it's about the increased vulnerability of US forces in Japan and Guam to the new generation of Chinese missiles," Alan Dupont, professor of international security at Sydney University, told media.

"The new Chinese missiles could threaten them in a way they've never been able to before, so the US is starting to reposition them to make them less vulnerable. Australia's 'tyranny of distance' is now a distinct strategic advantage."

Dupont was one of several experts who directly linked US interests in Australian military facilities to China's emergence as an economic and military power.

And he was not alone in warning of dire consequences for Australian relations with its Asian neighbors.

"The United States is slowly but steadily strengthening its alliances in the Asia-Pacific region, because of fear of China's rise," John Mearsheimer, professor of political science and the University of Chicago, told GlobalPost. "Most of China's neighbors are also worried about the implications of a powerful China, and that is causing them to look to Washington for help.

"Of course, all of these moves appear threatening to China, which will cause Beijing to increase the size of its military, which, in turn, will scare China's neighbors and America, and cause them to further strengthen their militaries so they can contain China. This is the classic security dilemma at play, and it is likely to lead to trouble."

Hugh White, professor of strategic studies at the Australian National University and a former deputy secretary of defense, called an expanded US military presence in Australia's north "a very significant and potentially risky move for Australia."

"In the view from Beijing, everything the US is doing in the western Pacific is designed to bolster resistance to the Chinese challenge to US primacy," he said. "In Washington and in Beijing, this will be seen as Australia aligning itself with an American strategy to contain China.''

The Australian Greens party — which holds key votes in the parliament — said the move would at best annoy Australia's neighbors, including China, and at worst make it a bigger military target.

And the presence of American boots on Australian soil is nothing new.

Under the ANZUS (Australia, New Zealand, United States Security) Treaty, US forces have been using Australian facilities for 60 years on the promise (though no guarantee, if you read the fine print) of a military helping hand should their southern neighbors need it. An American military presence dates back to 1907.

Already, around two-thirds of all US Marines are already based in the Pacific.

The US has been nothing if not up front about its plans to maintain a strong permanent presence in the region.

US Defense Secretary Leon Panetta recently said: "We will fulfill our commitments to Australia and all of our allies ... to make very certain that the countries in the Asia-Pacific region understand that we are there to stay."

Over the past year, US and Australian military chiefs have been drawing up plans to increase military exercises and training between the nations' forces, the 'prepositioning' of US equipment in Australia and potentially greater access for the US to Australian ports and military facilities.

The plans also have support outside political and military establishments.

Damien Kingsbury, who specializes in issues of development and human rights at Deakin University, said: "While China does not present a direct or immediate threat to Australia, its strategic shadow is growing, now extending into the Indian Ocean (Sri Lanka), South-East Asia (Timor-Leste) and the Pacific (Fiji)."

He added, "These areas are of direct interest and potential concern to Australia."

On the eve of Obama's arrival, the Sydney Morning Herald reported, despite some skepticism on the matter, that the government had "all but confirmed" that US Marines and materiel would be shifted to Darwin. Obama, the paper reported, would indeed announce an expanded military presence in Australia, resulting in "vastly more US ships, planes and soldiers visiting and being stationed in the nation's north."

(More from GlobalPost's Down Under blog: For the president who has everything... crocodile attack insurance)

While there has been no official comment from the White House on the issue of increased cooperation, Pentagon spokesman George Little was quoted by Agence France-Presse as saying: "Australia is an American friend and ally, and we will continue to work together to foster even stronger military ties with one another."

At the Asia-Pacific Economic Cooperation summit in Hawaii this past weekend, Obama announced a new Asia-Pacific trade accord that he said demonstrated that "American leadership is still welcome" in the region.

"The United States is a Pacific power and we are here to stay" Obama said emphatically. "There's no region in the world that we consider more vital than the Asia Pacific region."