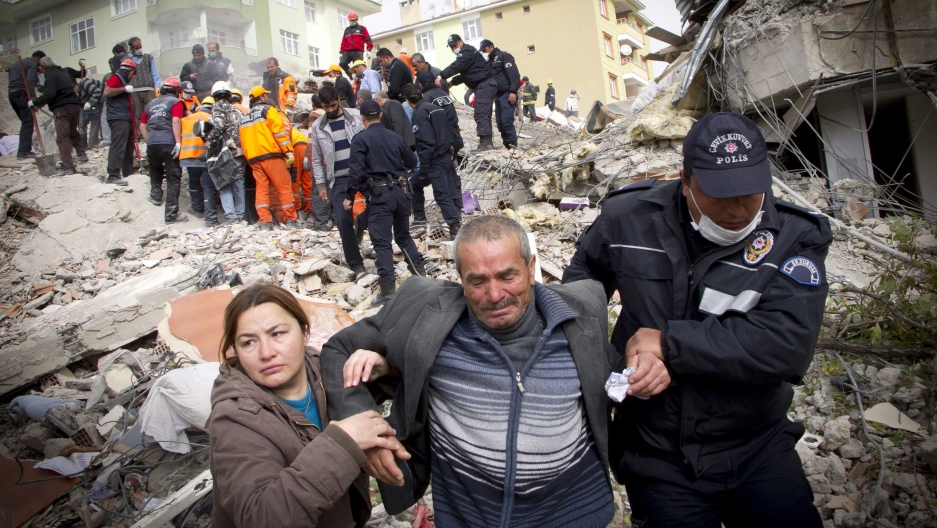 Relatives of victims cry on the ruins after an earthquake in Ercis province of Van, in Turkey, on Oct. 25, 2011.
Credit: Ahmad Halabisaz
Share

The recent string of earthquakes and aftershocks that have rattled eastern Turkey have left at least one city a virtual ghost town, a government official said Monday.

“It is a ghost city,” Van’s provincial Gov. Munir Karaloglu told a state-run Turkish news agency. “Almost none of the buildings are in use.”

Most government-owned buildings in Van have been destroyed from the quakes – notably the 7.2- and 5.7-magnitude quakes that have leveled 2,000 buildings and killed over 600 people, the Associated Press reported.

Estimates for the city population vary from roughly 370,000 to 500,000 with the majority of the residents being ethnically Kurdish.

The nearby town of Ercis has been reported as the worst hit by the earthquakes. Thousands have been displaced with many having fled their homes out of fear of potential collapse.

Despite aid being sent from the international community and from the Turkish government, relief efforts have been uncoordinated and slow.

"We admit that we failed in the beginning, within the first 24 hours,” he said. “We acknowledge flaws but these mistakes are pretty normal in such incidents.”

Insufficient relief efforts and miscommunication from government officials to locals infuriated many, resulting in several hundred rallying in Van to protest.

The International Federation of Red Cross and Red Crescent Societies estimate 50,000 people have been affected by the earthquake in Van province and as much as 3,700 buildings that survived the quakes could be unfit for habitation.