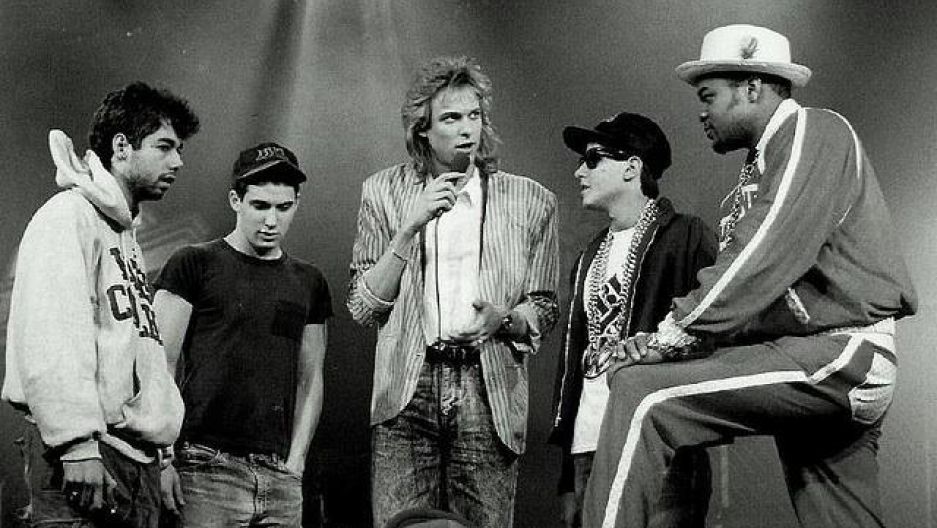 The Beastie Boys and Darryl "D.M.C." McDaniels with MTV VJ Adam Curry at center in 1988. (Photo from I Want My MTV, cCourtesy of Adam Curry.)

Story from Studio 360. Listen to the above audio for a complete report.

Thirty years ago, hardly anyone knew what a music video was.

On the night MTV was launched, its founders — a ragtag bunch of music fans and rookie television execs — had to take a bus from Manhattan to New Jersey to watch the broadcast, because no New York cable company carried the fledgling channel. Veteran music journalists Craig Marks and Rob Tannenbaum tell that sad little tale in their new oral history I Want My MTV: The Uncensored Story of the Music Video Revolution.

Within just a few years, MTV had become a cultural juggernaut, transforming the music industry and creating a new generation of megastars. Two things helped turn around the network’s fortunes: Michael Jackson's “Thriller” video, and the "I Want My MTV" campaign — killer content and ahead-of-the-curve advertising.

Music purists dreaded the rise of a pop audience judging artists only on their beauty. Marks said it wasn't so simple. MTV favored musicians who had theatrical flair, which is why British New Wave bands were huge on MTV even as they were scarce on U.S. commercial radio.

Hair metal bands also knew how to put on a good show.

The introduction of Yo! MTV Raps in 1988 was another turning point for the network and helped drive mainstream acceptance of hip-hop.

“That was the way that you found out if you were in LA, what New York hip-hop was about and what it looked like and what they were wearing,” Mark said. “It was the social network of that culture."

Marks said the golden age of MTV ended in 1992, when The Real World debuted, and MTV shifted focus from music videos to reality programming. In the nearly 400 interviews he did for I Want My MTV, most of his subjects were nostalgic for a time when a hit video would be seen by everybody.

“They all mourn this sort of last gasp of the music monoculture," Marks said. "It's hard to imagine there's that one place now that could produce that sort of change."

MTV launched a lot of artists, but arena rocker Billy Squier told Craig Marks that the video for "Rock Me Tonight" undermined his hard rock image and killed his career.