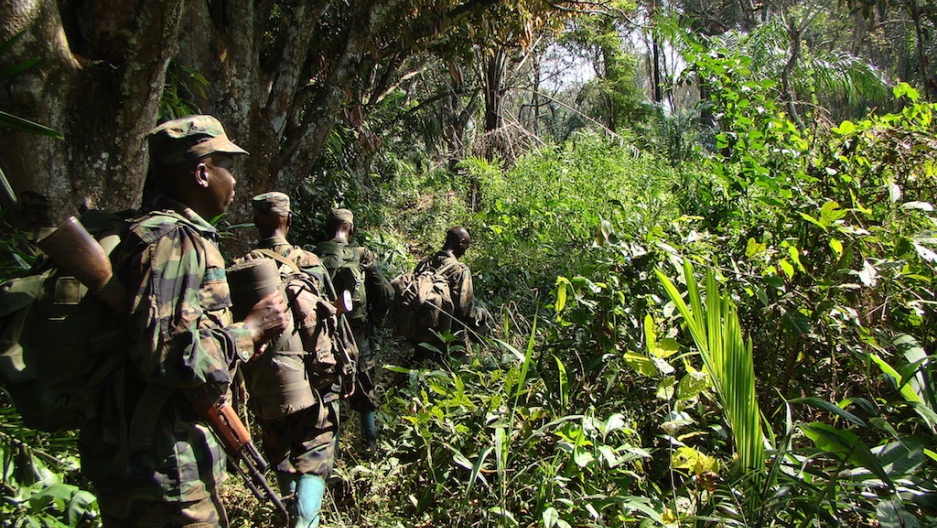 The Ugandan army has done a lot to diminish the fighting power of the Lord's Resistance Army in the region. This photo taken on Dec. 15, 2010, shows Ugandan soldiers scouring the Congolese jungle, a longtime hideout for renegade Joseph Kony.
Credit: Ben Simon
Share

KAMPALA, Uganda — The deployment of US troops to fight a rebel group that once terrorized northern Uganda has raised concerns among Ugandans who suspect the Americans are here on a different — and more complex — mission.

The US is pursuing Joseph Kony, whose Lord’s Resistance Army has raped and murdered its way through the East African region for more than two decades. At the same time, however, Ugandans say the US is interested in establishing a greater footprint in the region amid the rise of terror group Al Shabaab in Somalia and newly discovered oil resources.

President Barack Obama, in a letter to US House Speaker John Boehner, said that the deployment of about 100 combat-ready troops “furthers US national-security interests and foreign policy and will be a significant contribution toward counter-LRA efforts in central Africa.”

Kony, who is wanted by the International Criminal Court, has been battling the Ugandan army since 1987. The Lord's Resistance Army has portrayed itself as a Christian group that wants to establish a government in Uganda that adheres to the Ten Commandments, but its actions have little to do with religion.

Initially established ostensibly to protect the rights of an ethnic group in Uganda, his militia quickly devolved into a brutal gang that raped, tortured and mutilated civilians. Kony's army has abducted tens of thousands of children, keeping young girls as sex slaves and forcing the boys to fight for him. The fighting has displaced countless civilians.

Kony has expanded his area of operation into South Sudan, which became independent from Sudan in July, the Central African Republic and the Democratic Republic of Congo.

The US has branded his group a terrorist organization.

But the Ugandan military, which has managed to force Kony from his home base in its country, says that Kony is a spent force.

“Kony is not a threat to Uganda, but he is a threat to the region,” said Col. Felix Kulayigye, a spokesperson for the Ugandan army. “We have done a lot to diminish his fighting capability.”

Only a small advance team of US soldiers has already arrived in Uganda, and operations will eventually be extended to the Central African Republic — where Kony is said to be hiding — South Sudan and the Democratic Republic of the Congo. The US embassy in Kampala recently told reporters that the troops, who will only advise the Ugandans as they hunt down Kony, will stay there until the job is done.

More: 5 things to know about the LRA

Kony has been the focus of US ire for the past few years. In December 2008, the US backed an aerial assault by Ugandan and Congolese troops on his forested base in eastern Congo, codenamed Operation Lightning Thunder. Kony escaped. Later, he regrouped and launched civilian massacres in retaliation, provoking an outcry by human-rights groups who said that the operation had been launched without considering a possible backlash against civilians.

Last year, the US Congress passed the Lord’s Resistance Army Disarmament and Northern Uganda Recovery Act, which became the legal basis for the current military intervention.

Kony is thought to operate alongside other rebel leaders in wide expanses of dense jungle, making it extremely hard to isolate him or even track him down. Critics worry that further pursuit of Kony could lead to further violence, either from the LRA or other armed groups that roam in the largely ungoverned region.

“The problem with the current mission is that it is defined as LRA-specific,” said Angelo Izama of the security think-tank Fanaka kwa Wote. “Any other rebel group can go and abduct and they will blame it on the LRA.”

While the focus on Kony is the stated core of the American mission, some Ugandans doubt that is all the US has in mind.

Ronald Reagan Okumu, a lawmaker who was actively involved in peace efforts to end Kony’s insurgency, said the US wants to secure its interests in a region in transition.

Uganda’s oil sector has edged closer to becoming fully operational. The Irish firm Tullow Oil is looking to sell its Ugandan assets to Chinese company CNOOC and French giant Total. Museveni has said that he supports the deal because the Chinese, who also have oil interests in neighboring South Sudan, have the clout necessary to fulfill their obligations to him.

The US has noted China's growing influence in the region as the economic giant buys up resources to feed its expansion at home, and may be looking for ways to counter that power.

At the same time, by pursuing Kony, the US may be looking to shore up further support for its anti-terror efforts in the region. Uganda President Yoweri Museveni is already a close ally. Uganda, along with neighboring Burundi, has supplied the bulk of the fighting force in the African Union's mission in Somalia, which is heavily funded and backed by the US.

“It looks like they are interested in getting allies,” Okumu said. “It’s the dynamics in the region coupled with the war on terror. They are taking interest in this region.”

“Oil,” Okumu added, “could be a secondary thing.”

Betty Bigombe, the diplomat who led the Museveni administration’s first attempt to talk Kony into accepting peace, said: “As long as Kony is still there, he is still a cloud in the sky."