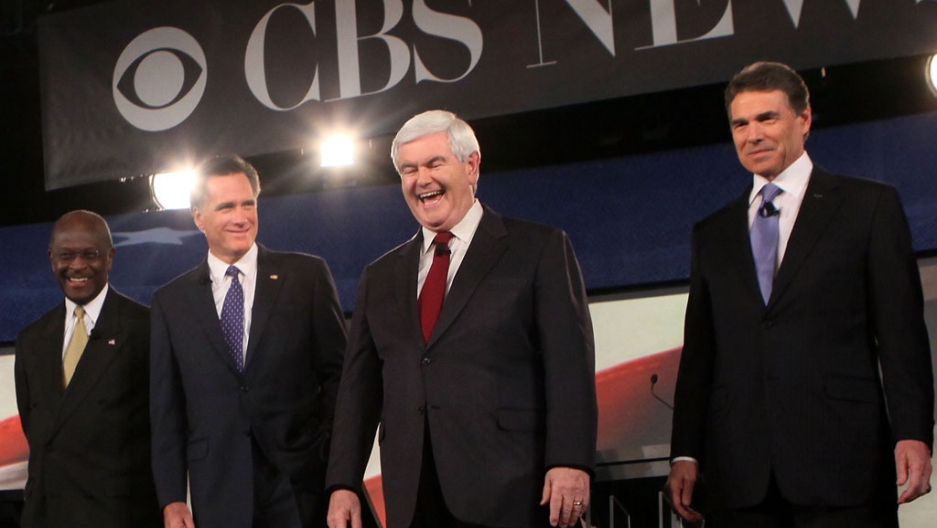 WASHINGTON — All in all, it was a pretty productive debate.

In less than 90 minutes, the eight Republican presidential candidates had, variously, invaded Iran, cut off all foreign aid to Pakistan, reinstituted waterboarding and started a trade war with China.

This was the first session devoted exclusively to foreign policy. Titled “The Commander in Chief Debate,” it sought to reveal where the Republican crop of contenders stood on the important foreign policy issues of the day.

As co-host Scott Pelley pointed out, many presidents have had to face major crises early in their presidencies — Abraham Lincoln and the Civil War, John F. Kennedy and the Bay of Pigs, and, closer to home, George W. Bush and the world-changing 9/11. The White House is no place for on-the-job training.

But the debaters seemed largely out of their element, cut off from their usual tirades over economic disaster and ruinous social policies, all of which they lay at the door of the incumbent.

President Barack Obama has had several perceived triumphs in the foreign policy arena, including the raid that killed Osama bin Laden and the recent overthrow of Libyan dictator Muammar Gaddafi, making it more difficult to attack him.

When challenged, the debaters often reverted to pat, feel-good answers that made decent sound bites but did little to elucidate their positions.

Businessman Herman Cain — still at the top of several polls, despite allegations of sexual harassment by female former colleagues — is most at home when dispensing folksy wisdom about his 9-9-9 flat tax. But his status as frontrunner earned him the first question, about Iran’s alleged nuclear program. He advocated assistance to the opposition, deployment of Aegis warships and economic sanctions.

Former Massachusetts governor Mitt Romney went quite a bit further, sounding the alarm and saying that all means should be deployed to stop Iran’s nuclear program. He called the possibility of a nuclear weapon in Iran “President Obama’s greatest failing,” and warned that if Obama were re-elected “Iran will have a nuclear weapon.”

But even he fell short of former House speaker Newt Gingrich, who used his new status as a top-tier candidate to push for bringing in the CIA. In Iran, he said, we need “maximum covert operations to block and disrupt the Iranian program, including taking out their scientists, including breaking up their systems, all of it covertly, all of it deniable.”

“If in the end, despite all of those things, the dictatorship persists you have to take whatever steps are necessary to break its capacity to have a nuclear weapon,” he said.

Afghanistan, which has faded from the news over the past few months in the light of momentous events in Libya, Syria and elsewhere, was very much front-and-center in last night’s debate.

Former Texas governor Rick Perry, whose “brain freeze” at the last debate had made him an object of ridicule, was back in fighting form. Asked to assess the combat situation in Afghanistan, he stated categorically that “the mission must be completed there. The idea that we will have wasted our treasure and the lives of young Americans to not secure Afghanistan is not appropriate.”

Perry did not clarify what, exactly, the mission was that needed to be completed.

Former senator Rick Santorum helped out: “Victory against the Taliban in Afghanistan is that the Taliban is a neutered force. They are no longer a security threat to the — to the Afghan people or to — to our country.”

The candidates were unable to sum up how close the United States was to this goal; recent events in Afghanistan have demonstrated that the Taliban, far from having been “neutered,” are still quite vigorous in their resistance, while the United States’ commitment is inexorably winding down.

Romney rejected any possibility of negotiating with the Taliban, but had little to offer in the way of solutions; John Huntsman said bluntly that it was time to come home.

“I say this nation has achieved its key objectives in Afghanistan,” said the former US Ambassador to China, to loud applause. “We’ve had free elections in 2004. We’ve uprooted the Taliban. We dismantled Al Qaeda. We have killed Osama bin Laden. I say this nation’s future is not Afghanistan. … I don’t want to be nation-building in Afghanistan when this nation so desperately needs to be built.”

Gingrich pointed out that it would be impossible to defeat the Taliban while they had safe haven in Pakistan and support from various other actors, setting off a heated discussion of what to do about Pakistan.

Perry advised cutting off foreign aid because “Pakistan is clearly sending us messages … that they — they don’t deserve our foreign aid … because they’re not being honest with us.”

Cain complained that it was impossible to tell whether Pakistan was friend or foe, while Santorum simply mandated that “Pakistan must be [our] friend,” and advised continuing the dialogue (and sending aid).

The most emotional discussions were reserved for the use and efficacy of torture.

Many of the Republican candidates advocated waterboarding, which, as Congresswoman Michele Bachman pointed out had been “very effective.” She dismissed any human-rights concerns, heaping scorn on the president for “allowing the ACLU to run the CIA."

Cain said he was opposed to torture, but that waterboarding did not fall into that category. “I see it as an enhanced interrogation technique,” he said.

But Congressman Ron Paul was emphatic in his rejection of torture: “I think it’s uncivilized and — and have no practical advantages and it’s really un-American to accept, on principle, that we will torture people that we capture.”

He was joined by Huntsman: “We diminish our standing in the world and the values that we project … when we torture … waterboarding is torture. We dilute ourselves down like a whole lot of other countries, and we lose that ability to project values that a lot of people in corners of this world are still relying on the United States to stand up for.”

The debate ended with China, Huntsman’s area of expertise. The other candidates, particularly Romney, talked tough about standing up to China on monetary policy and trade issues, while Perry confidently predicted that China would end up “on the ash heap of history.”

Huntsman, on the other hand, advocated working with China’s youth, to bring about positive change.

The candidates avoided attacking each other, by and large, making this debate a welcome change to some of the contentious wrangling that has characterized other sessions.

But for those expecting some clarification of foreign policy issues, the wait continues.