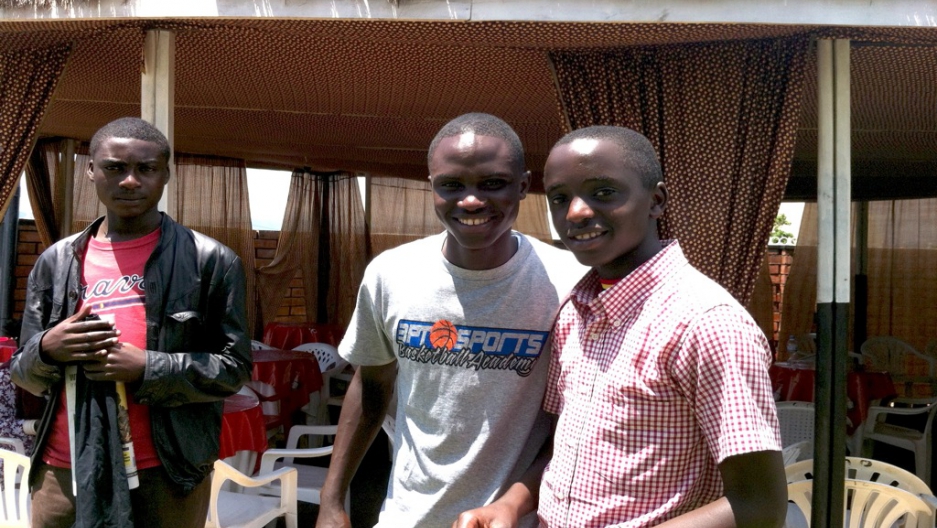 The two Rwandan boys shown here are coping with being children born from the mass rapes of the genocide.
Credit: Andrew Meldrum
Share

KIGALI, Rwanda — The teenage boys, awkward and nervous, looked down and mumbled when we introduced ourselves and asked them their names.

They spoke quietly when we asked them about the schools that they go to.

But after a while, they perked up when we asked them about Sevota, a self-help group for genocide rape survivors and their children.

One boy was particularly downcast and quiet and I could barely hear him when he got up to tell his story. Desire Hatungimana told us he is 16.

“I stay with my mom,” he said in almost a whisper. “The problem is that my mother is traumatized and sometimes she yells at me. In April, the anniversary of the genocide, she gets really traumatized. Things were bad.

“But now the women of Sevota help my mother and they help me,” he said.

More: Campaign for Rwandan Genocide Memorial is on Facebook

“The problem was that I used to ask my mother ‘Who is my father?’ At school the other students all have fathers but not me. I felt cheated in my heart,” said Desire, looking up at us as he spoke.

“Now at school my friends know my story and they don’t have any problems. My mom has a lot of courage. The only problem we have is poverty. But I am studying in school. I like English, science, math and other courses. I like to do writing. And after she told me about my father, so in writing class I wrote to my mother to thank her and she was very happy,” said Desire, in a strong, deep voice.

“Myself, I want to learn as much as I can at school,” he said, giving a smile that lit up his previously closed and dark face.

An estimated 250,000 women were raped during the genocide. There were brutal gang-rapes by many men. They were beaten and many times the rapists shoved sticks and branches up the women’s vaginas. There is a generation of children born as a result of that terrible genocidal rape and now they are struggling to build their lives.

Sevota was started a few years ago by Godelieve Mukasarasi, a rape survivor. “I was trained as a social worker and I wanted to do something. I had nothing, but I had a vision of helping others like me and helping young people.”

Today Sevota ekes by on a small grant from the Rwandan government, but from the testimony of the boys and girls and their mothers, it is having a huge impact on their lives.

The other boys that we spoke to were also 16. They were born nine months after the 100 days of genocide in April 1994.

Claude said that he had been taunted by kids at school, but now he has told them that his mother was raped in the genocide and now they accept him. His mother is HIV positive and he helps her at home. He does cleaning and washes cars. He does errands for old people.

“Because I help them, they love me and give me tips,” said Claude. “That gives me hope that I will be a better man in the future.”

Speaking with these 16-year-old boys and seeing how they have been helped to get over the trauma and stigma of the genocide rape was uplifting. To see them dreaming and working toward better lives for themselves is a moving sign of hope for all of Rwanda.

Andrew Meldrum's journey to Rwanda was sponsored by the International Reporting Project.