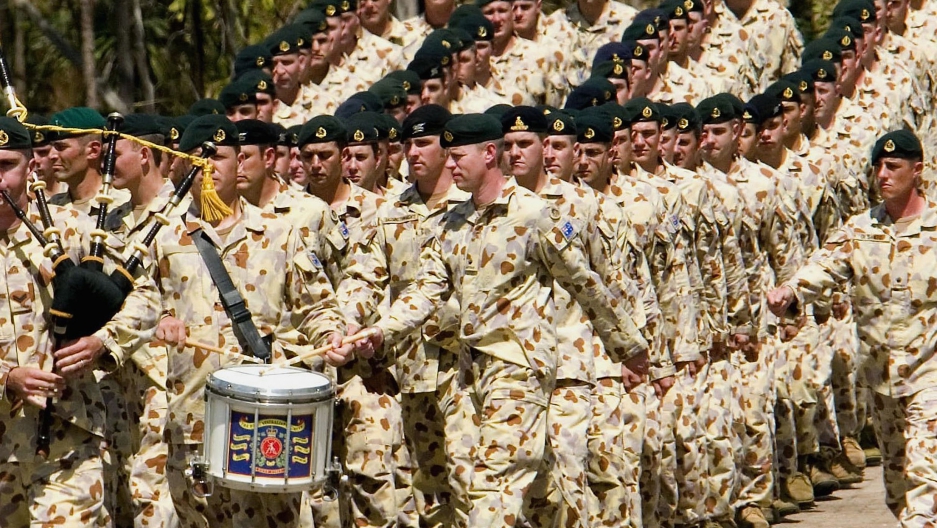 Australian soldiers deployed to Iraq enter the Robertson Barracks in Darwin, Australia, during a marching out parade May 10, 2007.
Credit: Terry Trewin
Share

President Barack Obama is expected to use a visit to Australia next week to announce that the US will establish a permanent presence Down Under and begin rotating Marines through a base in Darwin, in the far north.

According to the Sydney Morning Herald, which first reported the story, the US plan indicates "heightened concern about China."

Obama will make the announcement with Prime Minister Julia Gillard when they visit Darwin next Thursday during his first visit to Australia as President, the Sydney Morning Herald reports.

The discussions around U.S. bases in Australia reportedly occurred when Australian Defense Minister Stephen Smith was in Washington recently.  The White House has reportedly refused to confirm whether any deal has been reached.

Pentagon spokesman George Little, quoted by Agence France-Presse, said only: "Australia is an American friend and ally, and we will continue to work together to foster even stronger military ties with one another."

"This is all about the rise of China, the modernization of the People's Liberation Army and, particularly, it's about the increased vulnerability of US forces in Japan and Guam to the new generation of Chinese missiles," Alan Dupont, the Michael Hintze professor of international security at Sydney University, told the newspaper. "The new Chinese missiles could threaten them in a way they've never been able to before, so the US is starting to reposition them to make them less vulnerable. "Australia's 'tyranny of distance' is now a distinct strategic advantage."

Meanwhile, Professor Hugh White — professor of strategic studies at the Australian National University and a former deputy secretary of defense — questioned whether an expanded US military presence in Australia's north was the right way to deal with China.

"I think this is a very significant and potentially risky move for Australia," he told the SMH. "In the view from Beijing, everything the US is doing in the western Pacific is designed to bolster resistance to the Chinese challenge to US primacy. In Washington and in Beijing, this will be seen as Australia aligning itself with an American strategy to contain China.''

However, Federal Opposition Immigration spokesman Scott Morrison said he did not believe the possible expansion of the US military presence in Australia would be a provocative step against China.

Morrison has told Channel Nine that the expansion would simply be a function of Australia's alliance with the United States, and would not be aimed at pressuring China as it flexes its muscles in the Pacific.

"Our relationship with China I think will always be strong, and one of the key reasons for that is there is much to be gained on both sides of that relationship," he said.

The marines will use the Robertson Barracks, the Australian base near Darwin, already home to about 4,500 Australian soldiers.

Australia is a longtime US ally, however the only significant current US deployment here is at the Pine Gap Joint Defence Facility spy station near Alice Springs.

Obama arrives in Australia on Wednesday and will visit the capital Canberra before becoming the first US president to travel to the Northern Territory, of which Darwin is the capital.