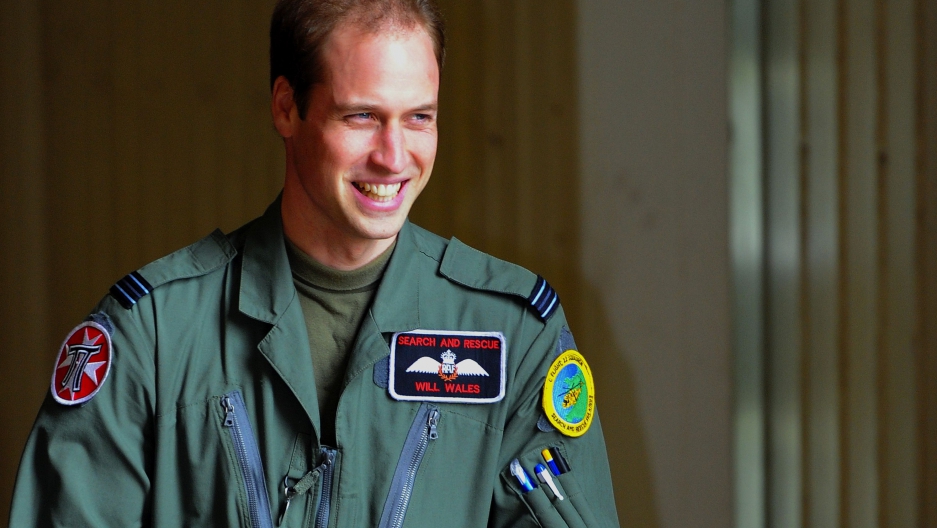 Prince William looking on as Britain's Queen Elizabeth II leaves after being shown a Sea King helicopter during a visit to RAF Valley in Anglesey, north Wales on April 1, 2011. Prince William spent his 29th birthday at work as a Royal Air Force helicopter pilot, in a far cry from the pomp and ceremony that surrounded his marriage to Kate Middleton just weeks earlier.
Credit: Andrew Yates
Share

Prince William of Wales, a British Air Force helicopter pilot, will reportedly deploy for a tour of duty in the Falkland Islands, a small archipelago in the far south Atlantic that is home to more sheep than people.

The Falklands, situated 300 miles east of Argentina's coast, have been part of the British empire since 1833, but Argentina claims sovereignty over what they call Las Malvinas.

The two countries fought what USA Today called "a vicious little war" over the Falklands after Argentina invaded them in April 1982.

The British prime minister at the time, Margaret Thatcher, sent a war fleet thousands of miles to the South Atlantic, and British forces retook the territory in a 10-week campaign that killed 650 Argentine troops, more than 250 British personnel and three islanders, The Associated Press reports.

According to USA Today:

Besides Prince Andrew's participation, the war also is remembered for aggressive media coverage in Britain and Argentina. In May 1982, when the British torpedoed the Argentine ship General Belgrano, killing hundreds of mostly teenaged conscripts, The Sun tabloid in London ran the headline "Gotcha!"

Britain maintains about 1,000 troops on the islands.

The British Defence Ministry on Thursday announced that newlywed William, 29, second in line to the British throne, would be deployed to the Falklands for six weeks early next year, after spending Christmas with his bride, Catherine, Duchess of Cambridge.

Flight Lt. William Wales, as he is known in the RAF a search-and-rescue pilot, part of a crew of four from 22 Squadron, RAF Valley, the BBC reported.

The deployment will form the latest stage of his training program, the BBC cites RAF officials as saying, adding that the dates of his tour were chosen to avoid a clash with the Queen's 2012 Diamond Jubilee celebrations.

Agence France-Presse quoted an RAF statement as saying that rules prohibited Catherine from joining him on the posting. The couple currently live in Wales, near the prince's military base. The RAF statement reportedly said:

"It is conventional that deployments to the Falklands for all SAR [search and rescue] helicopter pilots are unaccompanied."