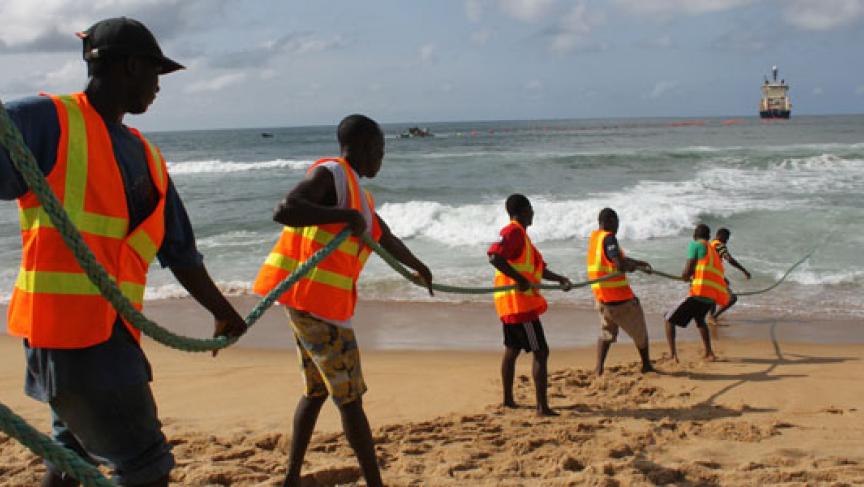 Fiber optic cable emerges from the sea in Liberia recently. The cable will connect South Africa and west African countries with France — and deliver broadband Internet for the first time. (Photo by Bonnie Allen.)

Inside a small internet cafe in Monrovia, only three customers hunch over computers.

Getting online in Liberia’s capital costs $2 an hour, more money than many Liberians earn in a day. Emmanuel Dolo is trying to apply for a scholarship, but he’s not having much luck.

“The Internet here is very slow. Sometimes you pay for 60 minutes and you only get to use 20 minutes. It just keeps loading and loading,” Dolo said. “It’s frustrating.”

In Liberia, businesses and internet providers must pay for expensive satellite service, which is far beyond the reach of most Liberians.

Elliott Blidi, a project coordinator in Liberia for the West Africa Regional Communications Infrastructure Program, said Liberia has the lowest Internet penetration in the region.

“In West Africa, Africa in general, our penetration is very low – about 0.02 percent. During the civil war years, the cables that were available, the financing and political will were not there to bring it in,” Blidi said.

But eight years after the end of Liberia’s civil war, that is finally starting to change. Last week, a French ship arrived on the Liberian coast, carrying with it a fiber optic cable, two inches thick and 10,000 miles long. The ship is dragging the cable from France to South Africa.

The Africa Coast to Europe (ACE) cable system, run by a consortium of telecom operators led by French Telecom, will provide broadband connectivity to more than 20 countries in Africa and Western Europe.

A crowd gathered on a sandy beach near downtown Monrovia, watching as a diver emerged from the sea, pulling a rope. Eventually, the underwater cable popped out of the ocean onto the beach, which prompted cheers from the crowd.

It was a moment of celebration for Ciata Victor. She’s a Liberian businesswoman who returned home after the war ended in 2003, armed with a degree in computer engineering technology. She said it’s been difficult to work here.

“I moved my company home from America to Liberia and internet access has been extremely challenging. I have paid as high as $449 a month for internet access,” she said.

After lagging far behind, Africa is on the verge of an internet boom, according to a recent World Bank study. As of 2010, there were 12 submarine cables in sub-Saharan Africa and another five under construction.

For Liberia, as well as Gambia, Sierra Leone and Guinea, the ACE submarine cable is the first fiber optic connection ever.

Blidi is confident Internet use here will increase by 75 percent in the next four years, even though many here have never used a computer.

The entire ACE cable must be in place before broadband service can be introduced to Liberia. That’s expected to happen in the middle of next year.

Meanwhile, the Liberian government and local companies must do their part — installing wires, cables, and towers to share the technology with the rest of the country.