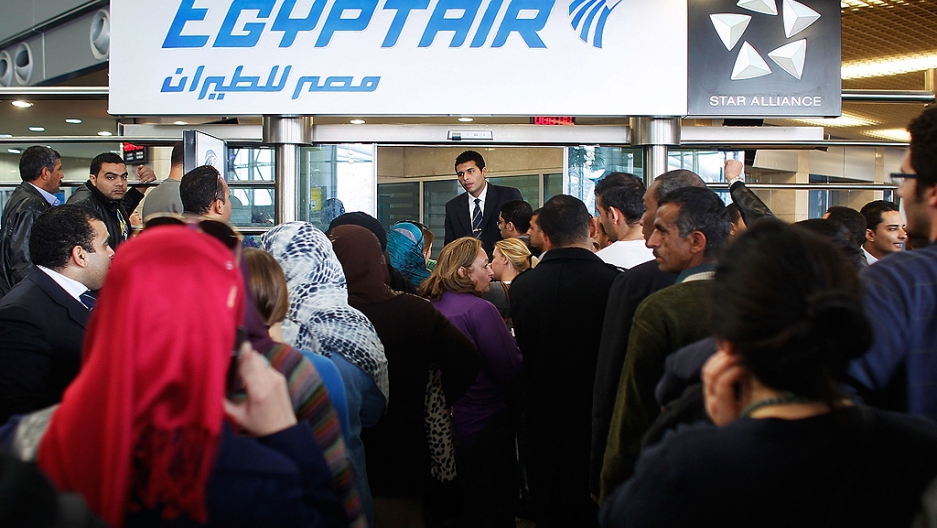 An EgyptAir worker attempts to manage a huge crowd of people looking for flights out of Egypt at Cairo International Airport on January 31, 2011 in Cairo, Egypt.
Credit: Chris Hondros
Share

A passenger on an EgyptAir flight from Sharm el-Sheikh to Cairo reportedly tried to open one of the emergency exits while the plane was mid-flight on Wednesday evening, according to Al-Masry Al-Youm.

The passenger, Abdallah Sayyed Ahmed, allegedly attempted to open the door at an altitude of 8,000 feet.

Security onboard the aircraft tied Ahmed to a seat to prevent him from opening the exit door, according to the Egyptian newspaper.

The flight was reported to be carrying 144 passengers, including Egypt’s Grand Mufti, the highest ranking spiritual guide for Sunni Islam in the country.

The plane's crew handed over Abdallah Sayyed Ahmed to Cairo airport security upon landing, according to security sources. He was referred to prosecutors for endangering the safety of passengers and the aircraft. Interrogations revealed that Ahmed worked in a Sharm el-Sheikh hotel and was dismissed one week ago. He tried to take revenge for his dismissal by opening the plane's door, the security sources said.

Wednesday’s incident was not the first for security onboard an EgyptAir flight.

In 2009, “air marshals” on an EgyptAir flight from Istanbul to Turkey restrained a “drunk” Sudanese man who had threatened to hijack the plane to Jerusalem, according to the Telegraph.