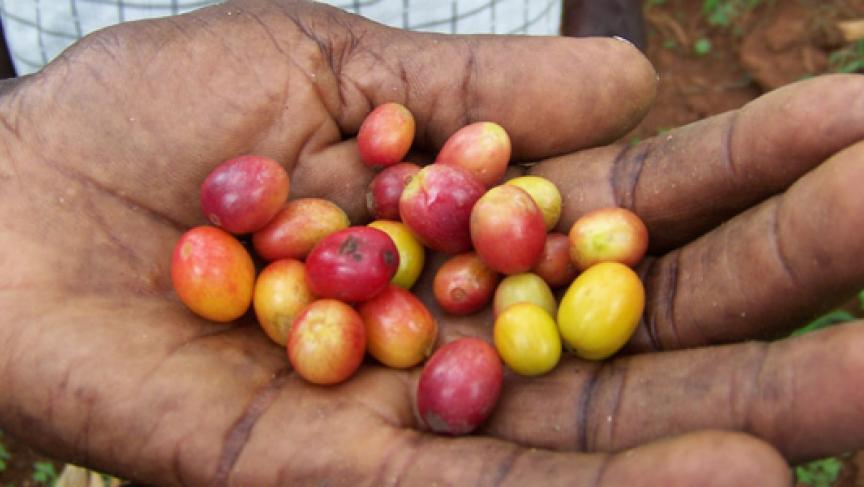 Story from The World. View a slideshow on TheWorld.org, or listen to the above audio for a complete report.

When you grow coffee, dead, brown leaves are not what you want to see.

They've been a scourge recently for coffee farmer Ahmed Nsubuga.

“It’s not good to show to your friends,” Nsubuga said with a laugh.

Nsubuga manages to maintain his sense of humor, even as the coffee farm where he works in central Uganda has been hit hard by drought.

Earlier this year, not a drop of rain fell for six months. Some of the coffee trees died. Others produced only a few red berries.

And even some of those berries offer only a hollow promise.

“This one is big, but when you open inside there is actually nothing. So you may think that you have coffee, but there is no bean,” Nsubuga said. "Because of drought.”

Prolonged drought is a new challenge for Uganda’s coffee farmers. The Robusta variety that Nsubuga grows is believed to have originated in this part of Africa.

It thrives on central Uganda’s predictable waves of sun and rain. Predictable, at least, until the last few years.

“It is obvious there is a change in the weather pattern,” said Africano Kangire, who heads up Uganda’s Coffee Research Center just outside of the capital Kampala. “You can feel it. You can see it.”

Kangire said the change in weather patterns here means unpredictable droughts. And when it does rain, there are sudden downpours.

Temperatures are also going up here, according to the United Nations development program. And that may be linked to another growing problem — coffee pests and diseases.

Farmer Pauline Chelangat grows Arabica coffee beans on the same land where she was born, in the cool mountains of eastern Uganda. She and a neighbor point to a tree speckled with orange dots — coffee leaf rust, a fungus previously found in only in warmer, lower altitudes.

But the rust is moving up Uganda’s mountain sides. And some believe it’s because of rising temperatures.

Chelangat first saw the rust here last year at about 5,900 feet. She said it starts on the leaf and “then it goes almost, I call it like a cancer.”

It then spreads to the rest of the plant and kills it.

“So the only solution is to uproot it completely and replant a new plant,” Chelangat said.

Farmers in the area have been doing that, but it’s expensive.

“You will find that it has affected the farmers’ income,” Chelangat said.

“I think what we’re seeing in East Africa, with alternating droughts and floods, it’s consistent with climate change,” said Peter Baker, senior scientist with the United Kingdom-based Center for Agricultural and Bioscience International.

Baker said many researchers are documenting increasingly chaotic weather and growing weather-related stresses in coffee-producing areas around the world.

“There’s quite good scientific data coming in from various parts of the world, that when it rains it rains more and when it doesn’t rain it rains less as it were. Which is exactly what you’d expect with climate change,” Baker said.

And, Baker pointed out that coffee grows in a relatively narrow climatic range, so there aren’t a lot of options for farmers to take their operations elsewhere.

“Therefore we have to make some choices and plan accordingly,” Baker said.

He said most of the changes needed to keep pace with climate change are beyond the scope of what a single coffee farmer can do. For instance, he said, the entire industry needs better infrastructure to manage water and work to develop heartier varieties of coffee.

Farmers like Nsubuga can’t afford to wait for these advances. He’s doing his best to adapt as quickly as possible.

One change Nsubuga’s farm has made is to plant more coffee under a canopy of shade trees.

“The canopy is very light. The light can really pass through directly to the crops,” Nsubuga said.

Shading the coffee trees keeps them and the soil cooler, so they lose less water through evaporation.

“In the long run, they can help protect your coffee from drying up,” Nsubuga said.

There are other benefits as well. Leaves falling off the shade trees help fertilize the soil when they break down. And the shade trees themselves provide important habitat for birds and other animals.

So far the change has paid off. The shade-grown coffee fared much better than other trees during the recent drought.

As for the increasingly unpredictable weather patterns, Nsubuga said there’s only so much he can do.

“We all leave those to prayers. God. Divine intervention,” he said.