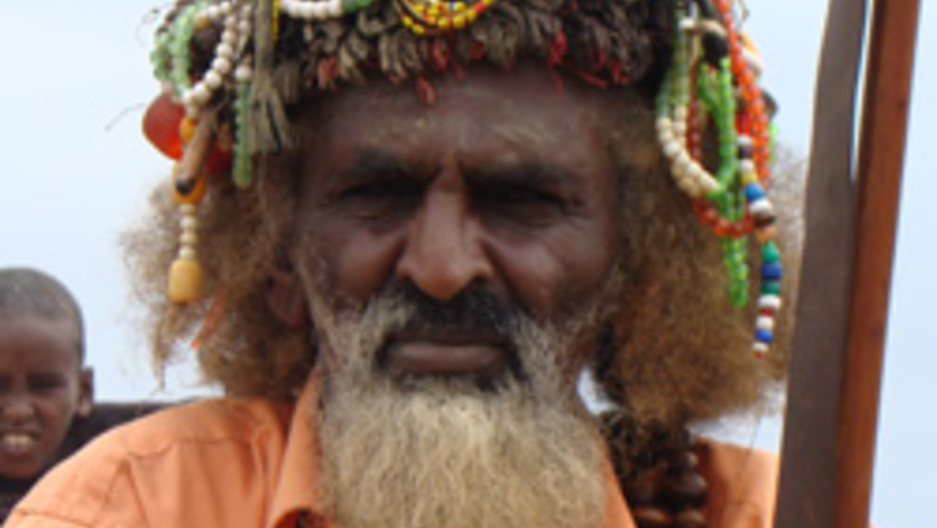 One of the holy men who maintain the Sheikh Nur Hussein shrine. (Photo: Megan Verlee)

Share
Millions of Muslims are in Saudi Arabia right now, participating in the annual pilgrimage known as the Hajj. You probably already know that the main destination for the Hajj is the holy city of Mecca. But some Muslims believe there are other locations that fulfill the Koran's requirements. For today's Geo Quiz we're traveling to a remote shrine in eastern Ethiopia where pilgrims who can't afford the trip to Mecca have gathered to worship. It's the final resting place of a twelfth century holy man. In recent years more conservative Muslims have destroyed similar tombs in the area. But this shrine, located on the edge of the massive Bale mountain range, recently got a face lift, with the help of the US government. Where are Ethiopian pilgrims worshiping right now? The Sheikh Nur Hussein Shrine in eastern Ethiopia is the answer to our GEO Quiz today. Reporter Megan Verlee recently visited the shrine to learn why it's so controversial for some Muslims. Set on the edge of a dusty plain two days drive from the capitol, the shrine's white-washed compound feels like it sits at the end of the earth. A tinny recording of prayer music greets visitors as they enter the main compound. Inside, guide Kadir Haji Ahmed points out an Arabic inscription above the door to the holy man's tomb. "This writing, when translated, reads 'Sheikh Nur Hussein, rich to anyone who calls on your name,'" He explains, and adds that that includes Muslims, Christians, and foreigners. That's the controversial thing about this shrine. Traditional Ethiopian Muslims follow the Sufi-style belief that the spirits of holy men can grant blessings to anyone who prays to them. But over the past two decades, teachers from the Saudi peninsula have swayed many here to a more fundamentalist reading of the Koran, one which holds that only god, Allah, answers prayers, and only from the faithful. Kadir says those believers are trying to suppress the worship of saints, sometimes violently. "Around the Bale area alone the fundamentalists destroyed nearly 33 graves of holy people," he says in Amharic, the local language, "and when people came for their pilgrimage on the holidays, they were beaten up, sometimes kidnapped. " Conservative Muslims deny they've attacked pilgrims. They say worship at the shrine is decreasing because people are giving up backward beliefs. In the courtyard of a mosque down the road from Sheikh Hussein, Burka Jigiru Tadessa says Ethiopian Muslims have allowed cultural practices to pollute their worship. Burka Jigiru explains that he used to make sacrifices and hold ceremonies at his father's grave, before he learned such practices aren't in the Koran. He says that young people especially are giving up the old ways; "they are willing to die to defend the true religion, because they understand it now." This remote conflict is starting to get attention far away. The Ethiopian government has stepped up protection for pilgrims traveling to the shrine. And the United States embassy recently bankrolled a major preservation project. Shrine guide Kadir Haji Ahmed says those moves have inspired the locals who've held onto traditional Ethiopian Islam. "Now the government is cracking down," he says, "people see that and they're more willing to stand up to the fundamentalists." The kind of conflict happening here at the shrine between different interpretations of Islam is playing out all over Ethiopia. Conservative Muslims complain officials are picking sides in a religious dispute. But one thing's certain; with the government stepping in, pilgrims headed the Sheikh Hussein Shrine for this weekend's Eid celebration have an easier journey. This story from Ethiopia was produced in collaboration with the International Reporting Project.