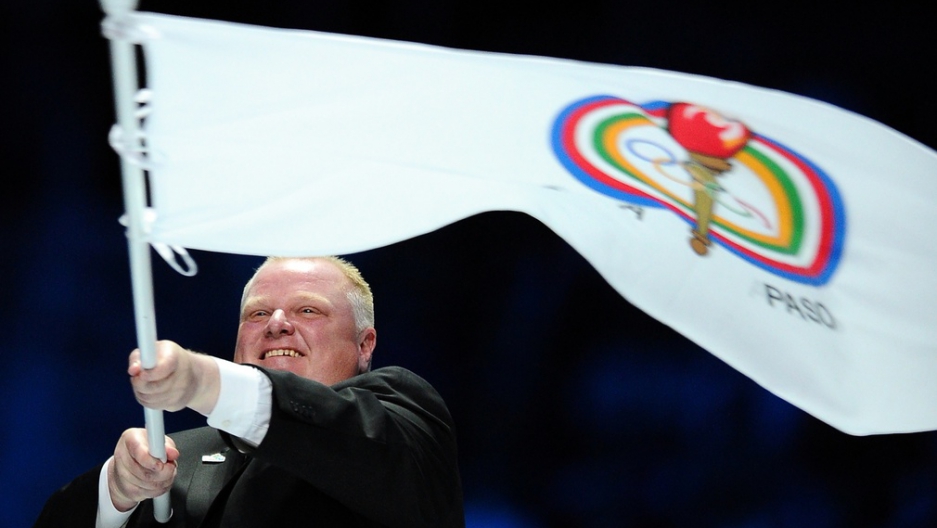 All the more so when the politician is a gruff, 300-plus-pounder who flips the finger to voters, swears at 911 operators and has a strained relationship with the truth.

It has been a year since Rob Ford was overwhelmingly elected as Toronto’s mayor, and the honeymoon is over.

It’s hard to blame Ford for the falling out. He never pretended to be more than an unexceptional city councilor with anger-management issues.

What’s stunning is how readily he was embraced by a city that thinks of itself as the most sophisticated in the country.

Read more: Who is Rob Ford?

By vowing to slash “waste” in Toronto’s $9.2 billion operating budget, and proclaiming the supremacy of the car, Ford tapped into the city’s latent conservatism and became a kind of Tea-Party mayor.

His tenure unraveled into farce. The apex came at the end of October, when one of Canada’s foremost satirists, Mary Walsh, tried to co-opt Ford into a skit for the long-running TV comedy show, This Hour Has 22 Minutes.

Dressed as her alter-ego, a plastic sword-bearing “warrior princess” named Marg Delahunty, Walsh tried to interview Ford in his suburban driveway as he got into his minivan to go to work.

For years, Walsh’s loudmouth character has been ambushing politicians for comic interviews, and they almost always play along.

He rushed back into his home and called 911.

And when he felt police were too slow to arrive, he called 911 two more times and angrily swore at the operator.

Ford confirmed part of the outburst. “Maybe I shouldn't have used the F-word — I apologize,” he said. “But to say I called the dispatcher a bitch, I never said that. I identified myself, which you're supposed to do, but I never used it in a conceited manner.”

Toronto police chief Bill Blair reviewed the recording. He backed Ford on the “bitches” part, but refused to make public a tape of the calls.

According to Ford, he was “ambushed” in the dark, feared for his safety because, “I’ve had death threats,” and was concerned for his 6-year-old daughter, who was crying and “freaking out.”

The CBC tape of the incident instead shows it was daylight, and there was no sign of his daughter.  As for being threatening to a man three times her size, Walsh said, “I'm a 60-year-old woman with a plastic sword.”

Liberal US political commenter, Keith Olbermann, referred to the episode on his Current TV show last week to dub Ford the “effing worst person in the effing world.”

Ford’s version of events might have had more credibility if he didn’t have a record of being less-than-truthful.

In 2006, a couple attending a Toronto Maple Leafs hockey game accused Ford of being drunk, shouting obscenities and telling the woman to “go to Iran and get raped and shot.”

Ford was eventually escorted out of the arena by security guards.

When confronted about the incident by a reporter, Ford claimed he was never at the game. Later, he admitted he lied, and apologized for his behavior. Then, in 2008, he was charged with uttering a death threat to his wife. The charges were eventually dropped.

During last year’s campaign for mayor, it was revealed that he was once charged with drunk-driving and possession of marijuana in Miami. Still, he swept to power with 47 per cent of the vote.

In June, Ford became the first mayor since 1994 to snub all events at Pride Week, a celebration of the city’s large gay community, which includes a parade that attracts a half million people.

Then came the story of Ottilie Mason, a woman who, while driving with her 6-year-old daughter and a babysitter, happened to pull up next to Ford at a major intersection in downtown Toronto. She says she saw Ford behind the wheel of his minivan talking on his cellphone, an act that breaks provincial law.

Mason gave Ford the thumbs down and told him to stop talking on the phone. Ford responded, she says, by raising his middle finger. Ford later released a statement acknowledging he was on his cell phone, but described the finger allegation as “not accurate.” He said it was “unfortunate this misunderstanding occurred.”

When asked in a TV interview, “What happened with flipping the bird?” Ford laughed for a full ten seconds and said, “That’s funny,” before his press secretary ended the interview.

On policy, Ford scrapped an $8 billion transit plan that the previous administration spent years negotiating with higher levels of government. It would have provided streetcar service to some of the city’s poorest suburbs.

He removed the right to strike for public-transit workers and contracted out garbage pick-up in the western half of the city. He also scrapped a $60 vehicle-registration fee, which had brought in $64 million a year. Motorists were happy, but for a city facing what Ford says is a $774 million budget shortfall, the loss of revenue hurt.

Elected on the slogan, “Stop the gravy train,” Ford found little waste to cut. He did, however, end free snacks at meetings for the city’s 44 councilors.

He caused a public outcry by considered the closing of libraries.

When Margaret Atwood criticized the move, Ford’s brother and de-facto deputy mayor treated the internationally acclaimed writer as a nobody: “I don’t even know her,” Doug Ford said. “If she walked by me I wouldn’t have a clue who she is.”

Ford’s support on city council started crumbling when he and his brother announced they would replace a waterfront revitalization housing project, which was years in the planning, with a tourist-focused one that included a monorail, Ferris wheel and giant shopping mall. Some of his staunchest supporters forced him to back down.

By September, opinion polls showed his popularity plummeting. But Ford wasn’t done yet.

Last month, the Toronto Star newspaper revealed that he outsourced the printing of his business cards to his family’s company. The $1,579 bill was up to four times higher than the cost of business cards ordered from the city printer. For a mayor who crusades on ending “perks and waste,” it smacked of an embarrassing conflict of interest.

There are three more years left in Ford’s mandate, plenty more time for the mayor to hold up an unflattering mirror to a city that thinks of itself as so haughtily different.