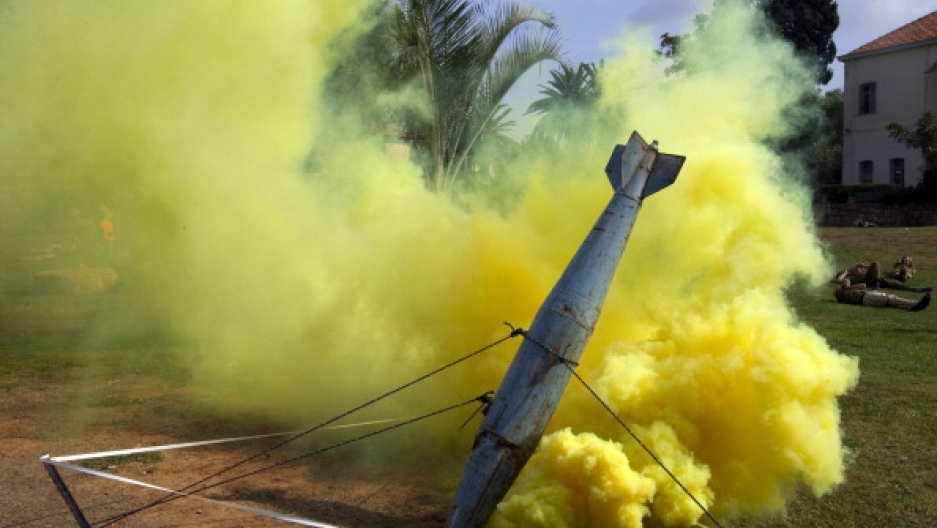 TEL AVIV, Israel — A gag order has been imposed on all Israeli government spokespeople and even on cabinet ministers in the wake of the release of the International Atomic Energy Agency’s report on Iranian nuclear activity. The Prime Minister’s office, for now, is said to be “reading the report.”

After a bumpy few months on the media front, Prime Minister Benjamin Netanyahu is said to be concerned that any reaction whatsoever by Israel, whose claim that Iran is preparing a nuclear bomb has been confirmed by the report, may appear to be crowing.

In light of the IAEA report, which reveals “credible evidence” of Iranian nuclear ambitions in the military arena, Israel, which has long been a primary target of Iranian threats, is preparing a major international push for “crippling sanctions” which could affect the Iranian oil industry and its central bank operations.

As a result, Israel’s standing in the international community is now on top of the agenda, and Haim Ramon, a leader of the opposition Kadima party, beseeched Netanyahu over the airwaves Wednesday morning to preserve Israel’s leverage over Europe and the United States.

Related: How to see through the spin on Iran

“The only way we can act against Iran is if we are on good terms right now with the rest of the world,” he said, dismissing the possibility of an Israeli air strike against Iran outright.

This seems to be the line adopted by the few official Israelis who are speaking publicly.

Tzachi Hanegbi, a member of parliament representing the prime minister’s own Likud party and a hard-liner on security issues, defined the possibility of an Israeli military strike against Iran as “absolutely the worst possible scenario. The only thing worse would be a nuclear Iran. But the military option is the worst option short of that.”

There appears to be an increasingly vocal consensus in Jerusalem that Israel is incapable or unwilling, militarily or diplomatically, to face off alone against a defiant Iran.

Meir Javedanfar, a professor for contemporary Iranian politics at the Inter Disciplinary Center Herzliya who recently published an article entitled, “Why Israel Won’t Go It Alone,” said that the IAEA report will mostly “increase the pressure against Iran.”

“This is a major crisis for the Iranian government and it’s a crisis that it cannot walk away from,” he said. “Chances of war in the immediate future remain slim. The Israeli government is very unlikely to attack without American consent but the economic and diplomatic consequences cannot be ignored by Iran’s rulers.

“They are basically denying the report’s findings and they will try to discredit it. But this time, it will not be enough. What the west should do is to apply more pressure against the Iranian regime but keep the doors open. The Iranians are susceptible and are not suicidal. When they realize the pressure is too much, they will compromise, as they have in the past.”

Alex Vatanka, an adjunct scholar specializing on Iran at Washington’s Middle East Institute said the IAEA report, on its own, “is not a game changer in any way.”

What counts, he says, pointing out the international membership of the agency, which is a UN subsidiary, is “which countries have signed up.”

“This report has not been released on a whim. It depends entirely on which countries support the conclusions. The only angle where I can see this being able to contribute greatly to the dynamic that has existed since 2002, is in allowing for more sanctions against Iran.

“We are not talking about a moment of ‘Lets go to war!’ Not at all. At best we are talking about tightening the noose around the Iranian regime’s neck.”

Russia, which shares a long border with Iran, and China, for whom Iran is a principal source of oil and a major trade partner, have both indicated displeasure and even opposition to the report’s conclusions.

Both Russia and China are permanent members of the United Nations Security Council. Vatanka believes the Russians, at least, will attempt to “dilute” any possible new sanctions or penalties.

“In the absence of military strikes the only real way to deal with Iran is containment, sanctions. All this report can do is bring more countries into the fold and put them in the western-led camp that says that Iran has to pay a price for its non-compliance.”

Russia, in particular, is concerned with waning influence in a changing Middle East, in which it has lost or is losing traditional allies such as Libya's Muammar Gaddafi and Syria’s Bashar al-Assad.

“What’s left if you are a Russian strategist looking at this region in terms of Russian spheres of influence is Iran. If you weaken Iran further they would look at that as a weakening of Russian influence in the Middle East,” Vatanka said.

Talk of a unilateral Israeli strike against Iran, which had reached a fever pitch in Israeli media and some American blogs over the last week and a half, has diminished to almost zero overnight with the release of the report.

“Speculations discussing the point of view about Israeli leadership, for example that Netanyahu and [Foreign Minister Ehud] Barak have decided on an attack, have been blown out of proportion. No Israeli official has stated that Israel has decided to attack Iran,” points out Javedanfar.

“This is not to say that the state of Israel does not consider the military option, but the international community became nervous about Iran after allegations that Iran wanted to kill the Saudi ambassador to the United States, and from that point on it was all out media.”