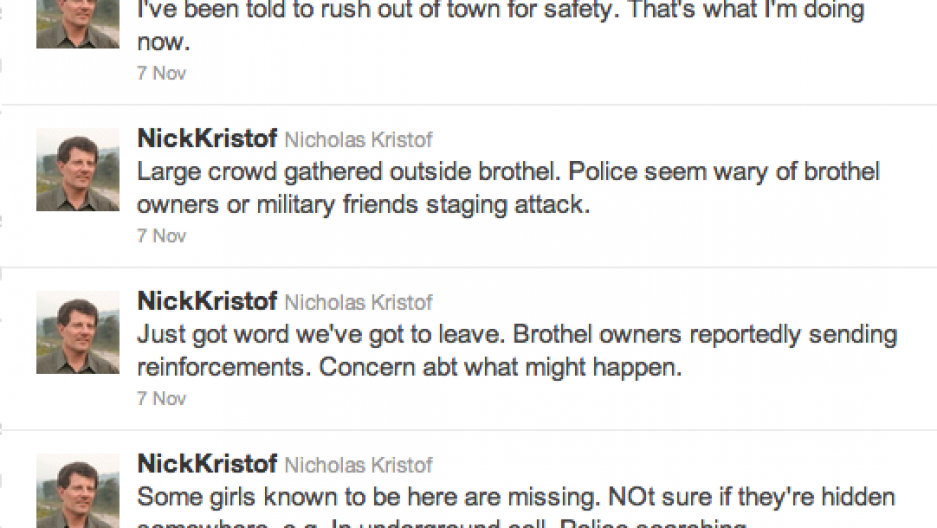 Globetrotting New York Times columnist Nick Kristof has put a new spin on one of his pet subjects -- underage prostitution in Cambodia -- by live-Tweeting a brothel raid.

This isn't Kristof's first foray into this dark subject. Among his best known series of articles hinges on his "purchase" of two teen Cambodian sex workers for the purpose of liberating them.

One escaped her past but the other, "bought" for $203, famously returned to the same brothel. (Sample passage: "I never lie to people, but I lied to you," she said forlornly. "I said I would not come back, and I did.") You can read that account here.

This week, Kristof and his smart phone followed Khmer activist Somaly Mam, herself a former sex abuse victim, along on a police raid of an underage brothel.

The Tweets (available here) grow dramatic as, according to Kristof, the brothel owners rally armed buddies in the military.

He Tweets: "Just got word we've got to leave. Brothel owners reportedly sending reinforcements. Concern abt what might happen."

We don't gather too much about the young victims from Kristof's Tweets. But then again, it's Twitter.

I suppose the coverage in real time is a worthy experiment. Not because it'll drum up attention for Kristof's fuller account in coming days, but because it will attract attention to very real plague: the ongoing fight against underage prostitution in loosely governed Cambodia.

That said, Kristof's crusading ways have attracted critics, a dose of which you can read here and here.