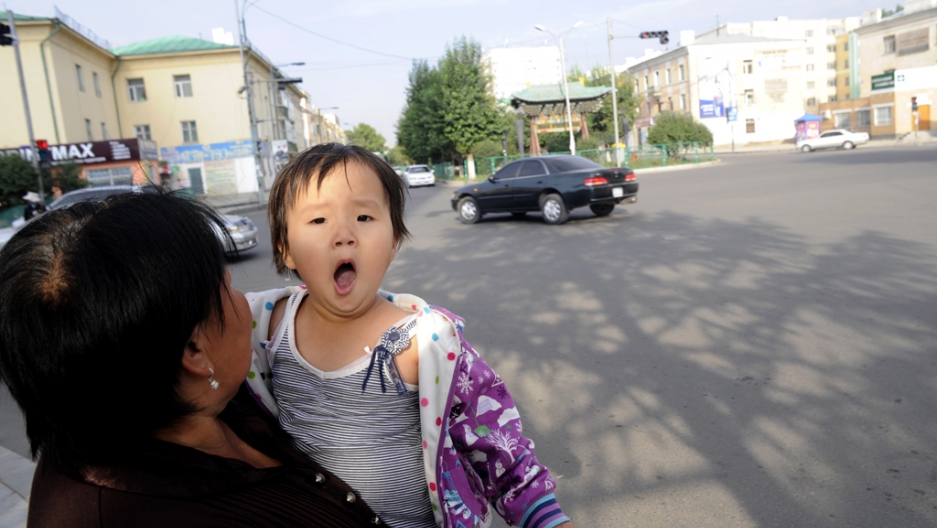 NEW YORK — In Mongolia, people are so scarce that the government has been paying them to procreate.

In a manner of speaking, that is.

Mongolia is one of the largest and most sparsely populated countries on the planet. It's almost as large as Alaska, and yet only has 3 million people (the population of Chicago).

On top of the fact that there aren't tons of people, the people that are there don't have as many kids as they used to.

Insufficient fertility rates have, for some time, prompted the state to offer serious incentives for having children.

Women who have six or more children, for instance, receive a medal called the "First Order of Glorious Motherhood," along with 200,000 tugriks (about $154), which corresponds to the monthly wage of an industrial worker in the large, landlocked country.

Four children bring mothers the honor of "Second Order of Glorious Motherhood," and 100,000 tugriks ($77). In some cases the payment is annual, otherwise it is given each quarter of the year.

Since these incentives started in the 1950s, more than 129,000 Mongolian mothers have won such awards — though the policy has been start-and-stop since it began.

So, the question is, does it work?

And then Mongolia’s fertility rate took a sharp turn for the worse in 1991. That's when the Soviet Union collapsed. When that happened, — down the drain went its contribution of nearly one-third of Mongolia's GDP.

Mongolia began its rocky journey from Soviet socialism toward democracy and a free-market economy.

“After 70 years of socialist development, Mongolians found their life-world turned upside down in 1991,” said Thomas Spoorenberg, a demographer with the United Nations who specializes in Mongolia.

“When such large-scale changes take place and life is uncertain, people are wary of having many children. Mongolia followed that pattern.”

The numbers speak for themselves. By the time 2005 rolled around, Mongolaia's fertility rate crashed to an all-time Mongolian low of 1.95 in 2005, while the world average hovered around 2.3.

But since then — largely thanks to the government upping its incentives in 2006 — the rate has started to rise. Mongolia's National statistics office reported an overall fertility rate of 2.69 children per woman in 2009. (World average for the period 2005 to 2010 is 2.5.)

Mongolia's always been a bit population-obsessed.

Like many former socialist countries, especially ones where labor is scarce and winters severe, population was a constant focal point. During the years when Mongolia got assistance from the USSR, the country spared no efforts to bolster population growth.

During a period of Sino-Soviet friction in the 1960s, resident Chinese workers were expelled from Mongolia, which caused a labor crisis. Among their crimes, as per Mongolian law, was the possession and distribution of condoms and contraceptives. Preventing procreation was a criminal offense.

Over the years Mongolia's population policy became the mirror image of neighboring China, with its "one-child" rule. In fact, Mongolia told its citizens that “childbearing was the patriotic duty of every Mongolian woman.”

Working Mongolian women were given a maternity leave of 101 days, and Mongolian labor laws forbade dismissal of pregnant women and of those with children younger than one year. Parents got family allowances in cash from the government. Mothers could be granted all-expenses-paid, two-week holidays at the hot springs spa of their choice.

Mothers had it pretty good in Mongolia. On the other hand, if you were young and married but had no kids, you had to pay a special tax.

Spoorenberg, the UN demographer, says that legalizing certain birth-control methods, such as intrauterine devices, or IUDs, in 1976 changed things for Mongolia.

By 1985, abortion became legal for women over 35 or women with five or more children, widows and those who had husbands with disabilities. By 1989, all restrictions on abortion and contraceptives had been removed.

Dr. Oyun Lkhagvasuren, director of health promotion at the department of health in the capital, Ulan Bator, says that Mongolia has made a “moral and economic” investment in women since 1991. “Mongolia is a society where women traditionally are accorded a lot of importance. This clearly reflects in government policy,” she said.

And in modern Mongolia, more empowered females mean more educated females. Most men still do the traditional farming and herding tasks in the countryside, while women are now encouraged to complete degrees and pursue careers in the city.

In 2005, for every 100 men, there were 162 women pursuing higher studies in Mongolia, according to a UN study — the largest such discrepancy among countries in Asia.

The rise in female education, according to experts, has correlated to Mongolian women choosing to have fewer children than before — despite institutional rewards.

While Mongolians may have “postponed fertility” in the years of upheaval during the 1990s, they are now delaying marriage and delaying having children. And if they have the first child, they are taking more time to have the second.

So, if not cash rewards, what will make people have more children?

Perhaps there's a lesson in astrology.  The last Year of the Golden Pig, according to the Asian lunar calendar, was 2007. It was considered an auspicious time to have children.

And, indeed, the figures do show a blip on the country's childbearing radar.