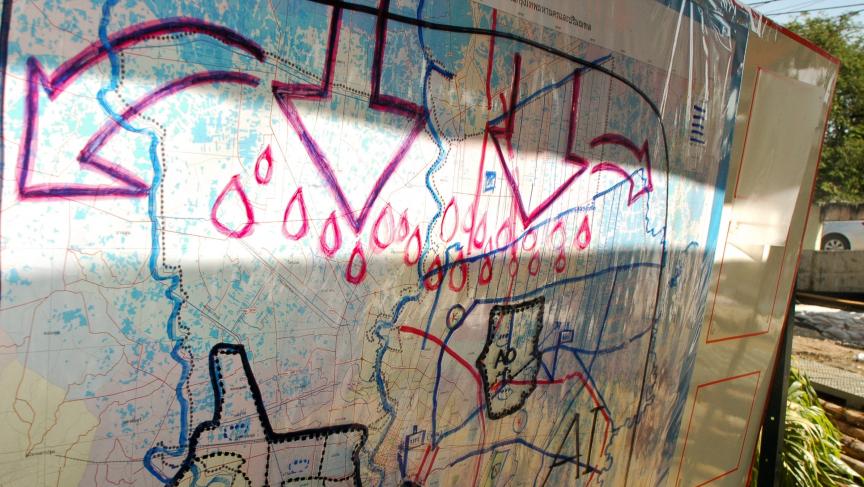 Since part of the flood barrier was destroyed in early November, authorities have mobilized police units to help residents with transportation and supplies--but also to keep the peace, should any further violence erupt. A map at the makeshift police base shows the direction of floodwater descending on central Bangkok.

Share
A long barrier of dirt and mud runs down the length of Hathai Mit Road. For weeks, this makeshift dike has been one of Bangkok's last lines of defense. It's kept floodwater from rushing south, into a key industrial zone, and on to Bangkok's central core. On one side of the road, the simple homes here are submerged in chest-deep water. The barrier kept the other half of this village dry, that is, until last week, when dozens of frustrated villagers living north of the barrier tore it down. Narongsak Srisawat sloshes through a puddle alongside a canal in the village. His home is north of the dike and it's been flooded for weeks. "It's not fair. I can't live in my house. I can't sleep in my house. I can't even use my own bathroom. Each day that passed, I got more frustrated. I couldn't take it anymore. So me and my people, we went out and claimed our rights," Srisawat said. It started with a protest. Narongsak said he and his neighbors told local officials to lift the floodgates to the canal. He said authorities agreed. But the gate remained shut. So last week people started hacking away at the mud barrier. "They just grabbed whatever they could find on the road. Some used their bare hands. Some tried to break the dike with wooden sticks, or pieces of metal," he said. "It Makes Good People Go Mad" Narongsak said he and his neighbors only protested; he's not sure who broke the dike. Most here claim it was people from another village. Nom Boonrit said he doesn't agree with those who broke the dike, but he understands why they did it. The floods destroyed his workshop, and he hasn't earned any money in a month. "There's too much pressure, no one has enough money to live," he said. "When you have so many problems all coming at the same time, it changes people. It makes good people go mad." Across the road, on what had been the dry side of the barrier, Prasai Treethod walks through her flooded home. She's set up a series of wooden boards, so that her frail, elderly mother can move around. Prasai said she and her neighbors on this side of the barrier were caught flat-footed. When the dike broke, it took less than five minutes for the water to pour into their houses. "I know that people up there have suffered for a long time," Prasai said. "But I don't understand why they had to break the dike. The dike is the only thing that protects us. When the dike broke, the water suddenly rushed through. No one had time to run. We could only just stand and watch." Outer Neighborhoods Sacrificed Bangkok sits on a river delta. It's subject to flooding each year during the monsoon season. The capital has a system of canals meant to push the seasonal floods, safely out to sea. It also relies on a series of dikes to divert the flood waters around the city and protect its central core. But the extensive flooding has exposed the tensions that lie at the heart of this strategy; while the barriers protect central Bangkok, its teeming outer neighborhoods are sacrificed. On the main road, authorities are trying to repair the harm. They've brought in portable toilets, food and clothing for both sides of the village, and the barrier has now been reinforced with a layer of asphalt, hot to the touch under the searing sun. But the damage is already done. Pornnee Armondit, who lives on the north side of the floodgate, shakes her head. Breaking the barrier didn't solve the problems. They made them worse, for everyone. "After they broke the first defense, the water rushed out, really fast," Pornnee said. "We felt like everything was going to be better. But then things changed. The water kept coming, and it didn't stop. We realized what we had done was totally wrong." On the other side of the village, Prasai said there's a lesson to be learned here. "Two sides of the same community can have a disagreement about the floodgates, and one side destroys it," Prasai Treethod said. "But both sides suffer and it'll be for a long time. Then the people on both sides will have to rebuild again." Thai authorities also have been plagued by infighting during these floods. The country's prime minister and Bangkok's city governor come from bitterly opposed political parties, and critics say the government response has fallen short, as a result. In the meantime, Bangkok still faces an uncertain future. The government has changed its message of assuring the city that the worst is over to warning that the danger could last for weeks to come.