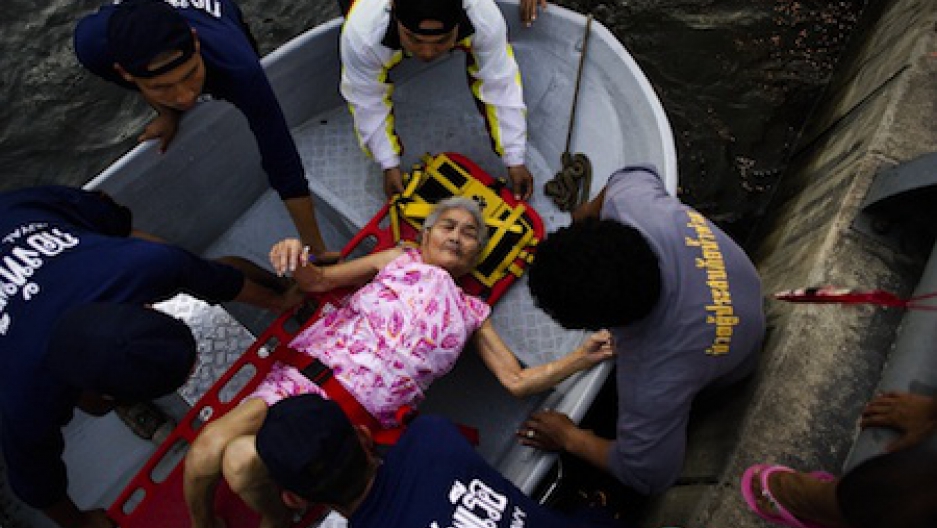 An elderly woman is evacuated from a flood zone to a hospital in Bangkok, on November 6, 2011
Credit: NICOLAS ASFOURI
Share

The real figure, however, is surely much higher.

The sanctioned death toll jumped past 500 when Thailand's Department of Disaster Prevention and Mitigation recently added about 60 cases to the sanctioned list.

But most of these lives were lost weeks ago. And only 2 percent of the recorded deaths occurred in the Greater Bangkok area, which has soaked up most of the media's attention.

I pinched that 2 percent figure from an American blogger and linguist by trade -- Rikker Dockum or @thai101 on Twitter -- who has dutifully maintained an English-language death toll in parallel to the official Thai-language government toll. (Bonus points for keeping up the list as his property takes on floodwaters.)

His spreadsheet offers some telling stats.

Drowning has accounted for nearly 90 percent of Thailand's flooding deaths, followed by electrocution at 5 percent. (Mudslides, lightning strikes and various other causes account for the rest.)

But this is the most telling figure: only eight deaths logged by the government have taken place in Greater Bangkok, a densely populated area where, for many weeks, millions have lived in homes filled with murky ankle-high or waist-deep water.

If my own tour of the disaster zone is any indication, plenty of families are wading around in rooms where TVs are perched on high shelves and power lines sag into the waters. The electrocution risk is enormous.

We have yet to learn how fatal these floods will prove in Thailand's capital. As outlets publicize the flooding toll's new 500-death high mark, we should be mindful that this grim superlative was probably reached some time ago.

If lives lost from flood-borne diseases are factored in, the toll will continue rising even after the polluted waters drain away.