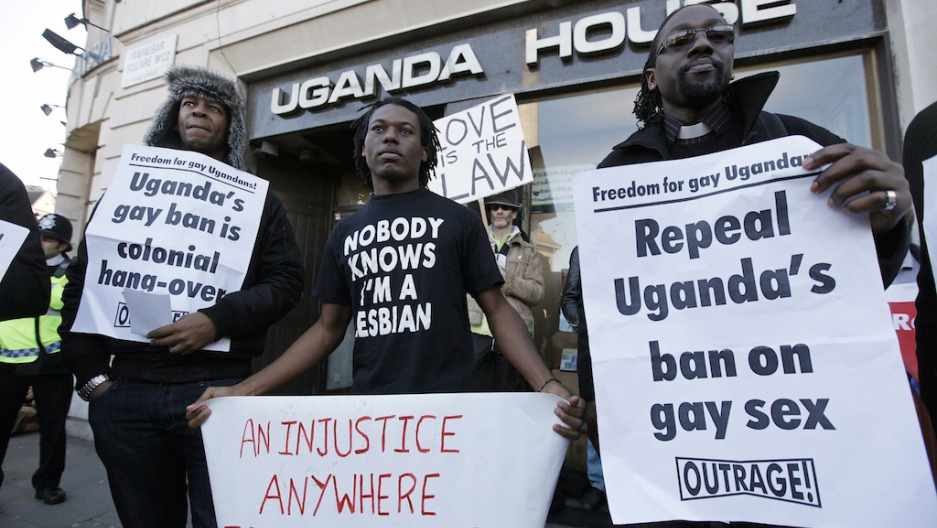 Uganda has expressed outrage over threats to cut aid because of human rights violations. This photo shows demonstrators protesting outside the Ugandan embassy in central London on Dec. 10, 2009.
Credit: Shaun Curry
Share

British Prime Minister David Cameron’s threat to cut aid to countries where homosexuality is illegal has sparked furious criticisms from Uganda, according to BBC.

Homosexuality is illegal in Uganda and many other countries in Africa.

Cameron had called for the slash in aid payments to countries with poor records on gay rights during a Commonwealth Heads of Government Meeting in Australia last week.

Nagenda accused Cameron of treating Ugandans like “children” and said, “If they must take their money, so be it.”

Uganda is due to receive $109 million in aid money this year.

The suggestion from Cameron was one of more than 100 recommendations put forth during the meeting to keep the organization relevant in 21st century global affairs.

"This is an issue where we are pushing for movement, we are prepared to put some money behind what we believe,” he told the BBC. “But I'm afraid that you can't expect countries to change overnight.”

If Cameron’s recommendation is acted upon, it would only affect one aspect of aid known as general budget support, the BBC reports. The overall amount of aid given to a country would not be reduced.

Nigeria, Malawi, Uganda and Ghana have been pointed out as countries that violate the human rights of homosexuals, according to the International Business Times.

Homosexuality is illegal in Ghana and comes with a sentence of up to 14 years in prison in Nigeria. Uganda has plans to punish homosexuality with the death penalty, according to the Daily Mail.

Malawi has already had some of its aid suspended due to the country’s poor human rights record, Time reports. The British government cut $30 million of aid to the country after two homosexuals were sentenced to 14 months hard labor for holding an engagement ceremony.