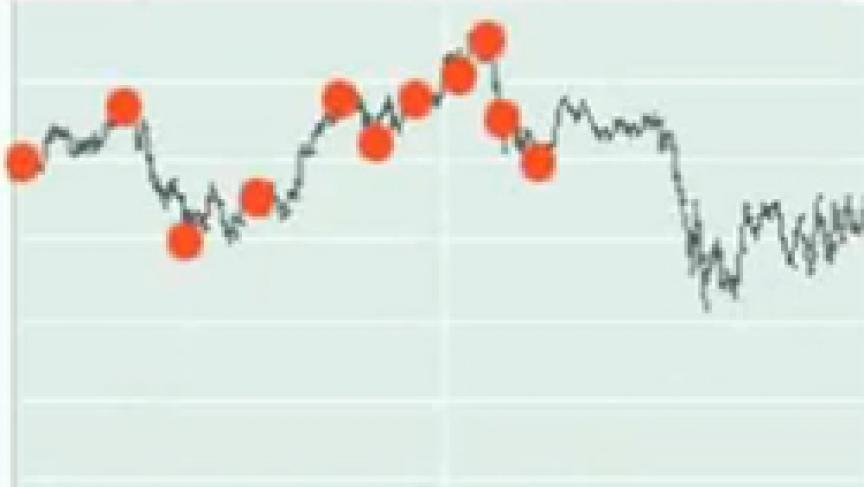 Share
In his fifth floor Berlin apartment, composer Johannes Kreidler plays the YouTube video that made him an Internet sensation. "I'm starting with the Lehman Brothers, which is starting pretty high and in the end the melody is very down," says Kreidler. "And then the Bank of America…" Kreidler netted more than a half million hits for his video of stock charts translated to music. He took the precipitous fall of bank share prices like Lehman Brothers, turned them into melodies, and then posted a video of the charts and the music together online. "And I always changing the arrangement. Now I think it is a waltz," he says and hums. "And it's the Microsoft values." Kreidler included Microsoft in his stock chart music video because it designed the program he used to create these songs. The program's called Songsmith. It's for kids, which explains the cartoonish sound. To make the songs, Kreidler started off with the stock charts of banks and other companies. He also included unemployment data and US national debt. "I took these charts and they are pretty similar to musical notation. In musical notation you have the pitch and the time in a diagram, and with stock exchange values you also have a diagram with the time on the one axis and on the other axis it's the value. And so you can transcribe these values into pitch information, and so into melodies." Then he fed those melodies into Songsmith which created a jazzy soundtrack of the financial crisis: Songsmith makes even the Dow's slump in 2009 sound upbeat. "For me I was interested in the contradiction that is generating an aesthetic effect or a funny effect for sure," says Kreidler. "Why not being funny? But it is definitely serious behind." Kreidler says the music shows the disconnect between the exuberance of financial excess and the consequences of that risk taking. The idea that every jazzy note translates to money lost, or houses foreclosed says something about how all of the data flying by us can sometimes lose its impact. What does a million or billion dollar loss actually mean? "I think that's really a strong field of possibilities for the arts to make things visible, to make things audible, to make things perceptible." When the video came out a few years ago, it provoked a big response online. People left comments on YouTube like "fantastic, brilliant, the financial crisis never sounded so amusing." But Kreidler says many musicians and artists had a different take. "Well, in the arts world it was really a controversy because people said it's not art," he laughs. Kreidler's used to this kind of criticism. He's a classically trained composer but he prefers to use commercial technology to experiment. "I was always fascinated by the means and possibilities that the computer offers and especially in music it is really great nowadays what is possible there." He demonstrates his latest project. It makes use of another Microsoft application: Kinect. Kinect works with Xbox 360 to register your movements when you're playing video games. Kreidler hacked the system and turned those movements into sound. Not the kind of tunes you'd put on to relax, but the music does present data in a new way. Now companies are approaching Kreidler to talk about translating data into sound. For some it's putting their share prices to music for corporate events, for others it's using sound to help recognize patterns in data — from stock charts to diagrams of brain waves. Kreidler says there is plenty to draw on these days, from the news and in life. "Since 9/11 we have the clash of cultures, we have the digital revolution, and we have now the financial crisis which is changing the world. It's a disaster but on the other hand, for me as an artist, it's material." And with the euro crisis, US job losses and Wall Street protests, there 's no shortage of material.