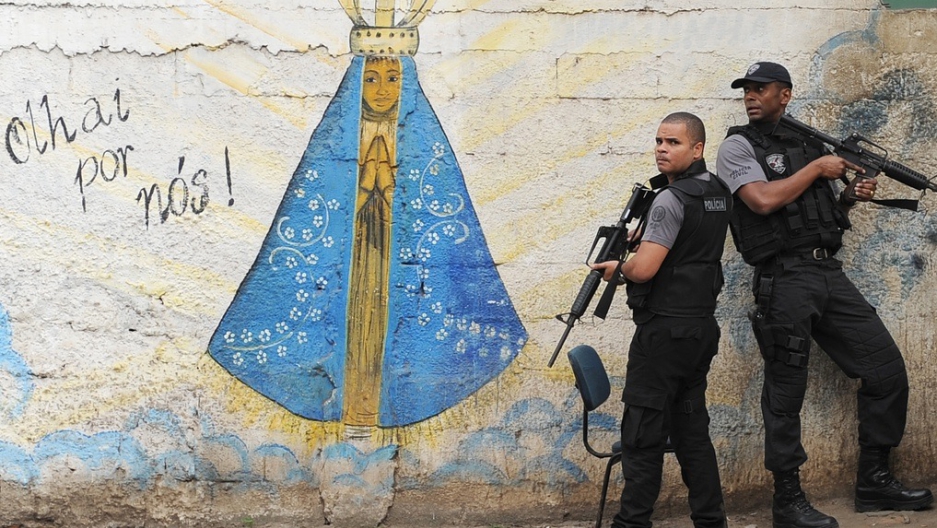 RIO DE JANEIRO, Brazil — Five years after his brother was gunned down by masked hitmen, a leading anti-mafia congressman and human-rights activist has been forced to flee Brazil because of threats to assassinate him.

Marcelo Freixo, a 44-year-old lawmaker from Rio de Janeiro’s parliament, went into temporary exile earlier this week, after security authorities detected a series of plots to murder him.

Freixo, who was elected in 2006 and hopes to run for mayor next year, has developed a reputation as a vocal opponent of Rio’s powerful milicias, in Portuguese — paramilitary mafia groups that are composed of off-duty policemen and other security forces.

His departure underscores the growing power and reach of mafia groups across the country that will host the 2014 World Cup. Two years later, Rio will stage the
Summer Olympics — the first South American city to do so. But while the so-called Marvellous City is eager to present a safe, modern face to the world, serious security issues persist, among them the milicias.

Now said to control around 300 regions of the city, the milicias are heavily-armed paramilitary groups that make their money from extortion and illegally taxing services such as cable TV, transport and cooking gas.

When the milicias first emerged they promoted themselves as community defense groups that vowed to protect impoverished parts of the city from gangs of drug traffickers. Today, however, they have become criminal enterprises in their own right, boasting war-grade arsenals and strong links to a number of influential politicians.

Freixo, a veteran human-rights activist, has dedicated much of his mandate to campaigning against the milicias. In 2008 he set-up and presided over a parliamentary inquiry into the groups’ illicit activities. The inquiry came about after two journalists from Rio’s O Dia newspaper were kidnapped and tortured by milicia members after they were caught secretly monitoring the criminals in one Rio slum.

The episode helped cast light on the mafia’s growing grip on the city and led to public outcry at the milicia’s perceived ties to power.

“For a long time the milicias were seen as a lesser evil in Rio de Janeiro but these criminals are a threat to democracy and the rule of law,” Freixo said this week, before flying with his family to an undisclosed European country.

Freixo’s decision to leave the country came three months after Patricia Acioli, a leading anti-mafia judge, was executed outside her home. Acioli’s car was riddled with 21 bullets, many of which were later discovered to be police-issue. Eleven members of Rio’s military police force have been accused of plotting her murder.

Freixo’s stance against the milicias has come at a great personal cost. Since 2008 he has been forced to travel and work flanked by armed security guards. He is the only member of Rio’s parliament to use a bullet-proof vehicle.

“I'm not in a bullet-proof car because I'm in debt, or because of a personal problem. I'm going around like this because I did my duty,” he said during an interview last year, shortly before being re-elected for a second term in office on a wave of popular support.

“I didn't do this because I was born to be a hero. It is my obligation."

During a 2008 meeting in his parliamentary chambers, Freixo could still muster a joke — despite the pressures of being a hunted man. “I can’t go to have a beer in Campo Grande any more,” he quipped, referring to a region of west Rio, notorious for being a stronghold for several violent milicia groups.

Freixo claimed that milicias increasingly represented one of the most serious threats to democracy and the rule of law in Rio and across Brazil.

“'Militias are criminal groups. They dominate territory, they take control of the sale of gas, of local transport networks, and they charge for security. And on top of that they kill people who position themselves against them,” he said.

Rio’s governor and mayor have so far made no public comment on Freixo’s sudden departure this week. But campaigners and human rights activists have described the politician’s self-imposed exile as a blow to democracy.

In an interview this week Ignacio Cano, a security expert from Rio’s Uerj university, described the MP’s decision as a “defeat” for society.

“I think this case underlines the gravity of the situation,” he said. “If all of our MPs did what they had to do, if all of our judges did their jobs, then individual MPs would not run such risks. But unfortunately since few do this, the few who do are exposed to serious personal risk.”

On Tuesday, as Freixo prepared to fly out of Brazil, protesters gathered outside Rio’s parliament carrying banners reading: “Freixo lives!”

Writing on his Twitter account, Freixo issued a parting shot to Rio’s mafia. “They have not won, and they will not win.”