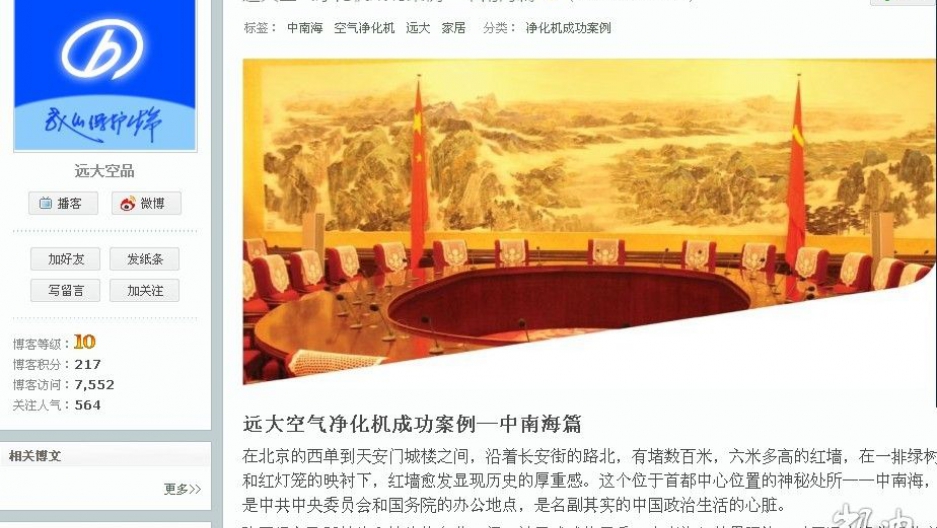 A Chinese webpage brags about selling air filters to the government.
Share

The debate over Beijing's grey-washing of its dangerously thick air pollution took a next twist this week, when Internet users discovered a company bragging about how it had outfitted the Chinese government leadership compound with top-notch air filters, the South China Morning Post reports.

On the website of one of its dealers, the Broad Group, a Chinese home appliance company, said it had supplied a large stock of special air purifiers to Zhongnanhai, the home and office compound of top leadership. This news as Chinese netizens and even some state-run media have begun to discuss the apparent truth about how Beijing appears to conceal just how dangerous its smog might be. In recent weeks, discussion has turned to the air-quality monitors of the US Embassy in Beijing, which offer hourly updates on Twitter and elsewhere of air-quality readings in Beijing. Those readings are typically far higher than what is reported by the Chinese government.

China's compulsion to keep the real truth about Beijing's air pollution has even led to some speculation that the embassy's BeijingAir feed led to Twitter being blocked here. Clean air at Zhongnanhai is now a hot topic on Sina Weibo, as Beijing languishes under yet another day of hazy, smog-filled skies.