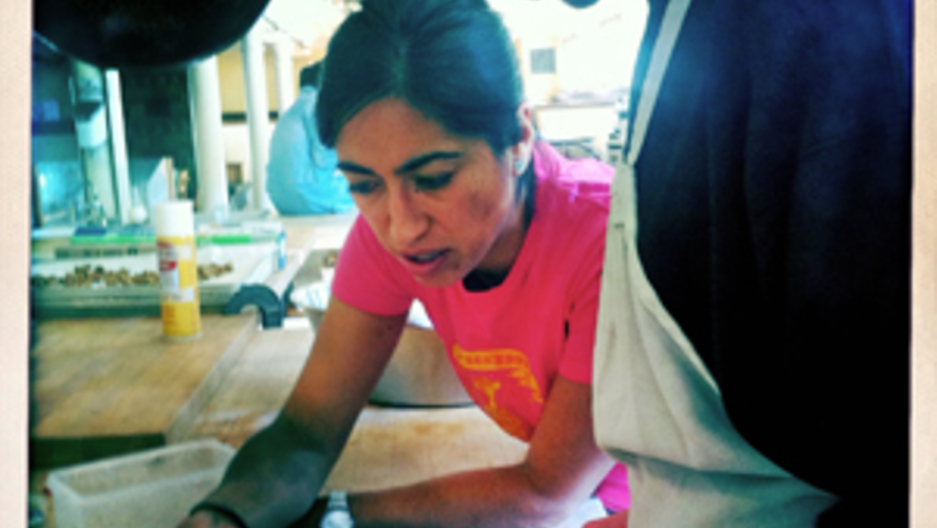 Chefs Monica Martinez and Phil Ross check to see if the edible worms they will serve for dinner are cooked. (Photo by Monica Campbell.)

It’s a few hours before a large dinner in San Francisco.

Some chefs are chopping zucchini and beating eggs. At her station, Monica Martínez opens a FedEx box, overnighted and stuffed with hundreds of her favorite ingredient: crickets.

“It’s really tricky because as soon as you open the box, they start jumping all over. Ah, they’re fast,” Martínez said.

“Don Bugito is a street food cart project based on edible insects and based on pre-Hispanic Mexican cuisine,” Martínez explained.

The cart will feature familiar Mexican ingredients — soft, blue corn tortillas, chilies and cheeses — along with protein-rich insects also found in pre-Hispanic fare. The plump larvae of the wax moth will fill tacos, along with peppers and a mint-cilantro salsa.

“When people ask why should I eat insects? I say, ‘Well, in pre-Hispanic times, in Mexico, before we have cows … the native people, the indigenous people used to have in their diets very strong insects, edible insects, and that was because all of those proteins, all those vitamins. The good things we get from cow products, from milk, we used to get them from edible insects,” Martínez said.

San Francisco’s foodie culture and its large Asian and Latino communities, whose cuisines can already include edible insects, makes the city a natural testing ground. Martínez gets around Food and Drug Administration restrictions on importing insects by working with certified California insect farmers like Brenda Young in San Diego.

“I was a little surprised. But I thought it was great. I’m probably on the wrong end of this field. I should probably be thinking more about food instead of birds and reptiles,” Young said, laughing. “I’m getting a lot more calls in the last year for people who are wanting to taste them.”

The increased attention has generated interest at the United Nations Food and Agriculture Organization. But there are limits. There’s the Fear Factor stigma, plus, pound for pound, insects remain pricey, especially if they’re used in volume and not just as a delicacy.

But if eating insects does take off, it’ll be renegades like Martínez who’ll serve them with flavor.

Martínez’s husband, Phil Ross, also an artist and chef, pan fried wax moth larvae in the San Francisco kitchen. They’re chubby and amber from a diet of bran and honey.

“In the state of Oaxaca, in Mexico, it’s a very typical, very common thing,” Ross said. “And you can actually watch people in the central market cooking them directly, almost in this exact same manner.”

Meantime, bugs are toasting in an oven until a timer goes off. Then they need to be stirred, to brown evenly.

At dinner, artist Joseph del Pesco couldn't wait for the food. He wants Martinez to start a lunch cart business.

“I was dying to walk down the street and have a bug for lunch, which sounds absolutely preposterous!” del Pesco said laughing. “It becomes part of your landscape of your work lunches.”

Next to del Pesco was graduate student Krystal Karney. Her friends didn’t come.

“Everyone I told was like I would never do that,” Karney said. “And I was actually shocked at my friends for not being open-minded enough to attend something like this. I thought it was fun."

Alonso Gallindo, who works at the Mexican consulate in San Francisco, hopes attitudes change, though he admits bugs aren’t a part of his regular diet.

“I mean thousands of years ago they ate insects. And I don’t know why we couldn’t eat them right now. It’s a cultural barrier and I think if we get through it we can explore new things,” Gallindo said.

“The world is not going to change and maybe edible insects are not going to start supplementing meat,” she said. “It’s about maybe introducing a new alternative.”

But there’s a downside to life as an insect chef.

“Sometimes it’s a little traumatic because I have dreams that they are in my bed with me. That’s the price that you have to pay,” she said.