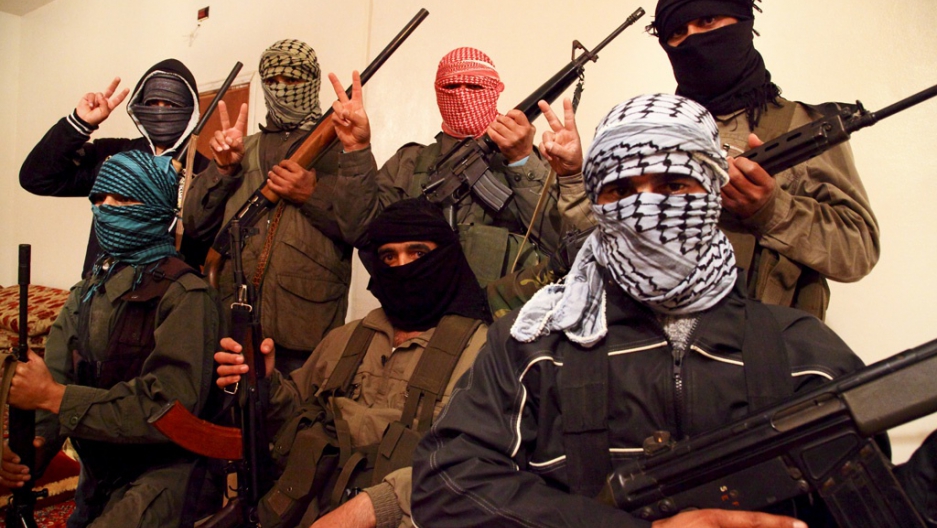 Members of the Free Syrian Army at a safehouse on northern Lebanon's border with Syria.
Credit: Skyeboat Films
Share

Dressed in the trademark leather jacket of the Syrian secret police, Abu Ali spent his early career as an enforcer of the state, a member of Syria’s Military Intelligence who wrote reports on friends, tortured confessions out of suspected opponents and answered directly to General Assef Shawkat, President Bashar al-Assad’s feared brother-in-law.

But as night fell recently across a rocky plateau dividing northern Lebanon from Syria, Abu Ali gathered his men for the latest mission of the Free Syrian Army, a fledgling fighting force of defected soldiers and volunteers calling for international arms as they seek to replicate Libya’s rebels by bringing down the Assad family’s 41-year dictatorship by force.

“There’s a base for the security forces nearby so we’re going to survey how many men they have and their firepower,” said Abu Ali, whispering in the pitch black to avoid drawing the attention of the Syrian soldiers standing guard at their base, less than 150 meters away. “We need to monitor their movements so we can prepare to attack them.”

Syria: How it all began

Sent to Daraa, the southern border town that was the cradle of the Syrian uprising, with orders to shoot to kill protesters, Abu Ali said he defected after being redeployed to the central industrial city of Homs, his hometown.

“I couldn’t shoot my own people,” he said, his face covered by a traditional checkered scarf, certain of the torture that awaits Syrian soldiers like him, were he to be caught.

The first officer to announce the establishment of the Free Syrian Army back in June, Col. Hussein Harmoush, was hunted down by Assad’s security and forced to appear on state-run television denouncing the defectors after his home in northwest Syria was razed and several family members were killed or captured.

Most of the soldiers of the Free Syrian Army, scattered along the border of north Lebanon, appeared poorly armed, carrying a mismatch of Kalashnikovs, shotguns and hunting rifles. But if there are enough to go around, each man ensures he carries a single hand grenade, to be used as a last resort.

“We will not be taken alive,” said Musab, one of the defected soldiers, from a second Free Syrian Army unit based close to the border. “If they come for us, we will kill ourselves and them.”

Musab described a recent mission he led, armed with the unit’s only rocket-propelled grenade, to smuggle an injured Syrian civilian across the border into Lebanon while delivering medical supplies, including tetanus shots to treat shrapnel wounds, bags of blood and gauze bandages, into Syria.

After four hours pinned down under heavy fire, grenades exploding all around him, Musab radioed back to his commander across the border in Lebanon.

“I said, ‘Forget freedom, just come and get me!'” he recalled, drawing a hearty laugh from the men assembled in a Lebanese safe house.

But their laughter quickly subsided: Lacking ammunition, heavy weapons or even a solid command and control structure, the fighters of the Free Syrian Army know very well that each mission could likely be their last.

“Our strategy is to fight a guerilla war against Assad’s troops,” said Musab’s commander, known to his division of around 150 men as Quteiba. “We established the Free Syrian Army to protect the protesters until they reach their goal of toppling this regime.”

Abu Ali, Quteiba and their men, seem — at first glance at least — little more than a rag tag band of out of work soldiers, scraping by on bread and spaghetti and a few hours of electricity a day in Lebanon’s poorest and most remote region.

But having cheered the death of former Libyan leader Muammar Gaddafi, leaders of the Free Syrian Army insist the world must now turn its attention to them as it did for Libya's rebels, calling on the West to impose a no-fly zone over Syria and to provide arms and support.

“The more weapons we have the more progress we can make,” Quteiba said. “We call on the international community, whether it’s the EU, the Arab League, France or Germany, to provide us with weapons and ammunition. If we have a no-fly zone and a safe area for our base, the collapse of the regime’s army will be swift. This is an army that serves a person and a family, not a country and its citizens.”

Free Syrian Army leaders told GlobalPost that a second defected colonel, Riad al-Asaad (no relation to the ruling family), had taken command of the Free Syrian Army, estimated to number between 7,000 and 10,000 troops, the majority of which remain inside Syria, with division commanders based across Syria’s borders in Turkey, Jordan and Lebanon.

But witnessing what he described as a massacre of civilians in Homs — which has been at the sharp end of the near eight month uprising and crackdown, and Avaaz, a leading rights group working in Syria, now believes has killed more than 5,500 people — pushed Quteiba to defect.

“They used fire engines to wash the blood off the streets and threw the dead bodies into pick-up trucks without even allowing them to be buried,” Quteiba said. “That was the saddest moment.”

Alongside such deep personal motivation, the soldiers of the Free Syrian Army also display militarily discipline.

Calling out numbers to deploy his men to survey different sectors around the Syrian base, Abu Ali hunkers beside a rock and makes a call on his mobile.

“Hello, yes, sir. I’m the officer from the middle area. The head of the unit. Sir, we did our surveillance mission […] No, sir, there are no checkpoints, only guards. Yes, there are snipers. […] Can we make an operation against them, sir?”

The request is declined and Abu Ali follows orders from what he said was the headquarters of the Free Syrian Army in Jisr al-Shughour, an area of northwest Syria that has seen some of the heaviest fighting between Assad’s security forces and defected soldiers, including airstrikes on their men, the Free Syrian Army claimed.

“I feel proud that we can say to the people, we are the Free Syrian Army and we are here on the ground,” said Abu Ali, his whisper easing as his men drew closer to their safe house back in Lebanon. “We hope we can make big operations soon that will topple this regime.”