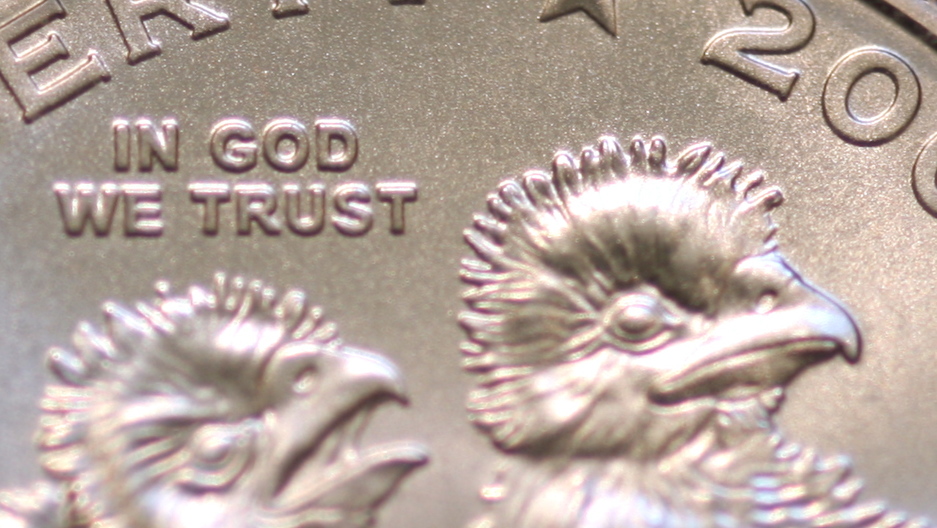 The words "In God We Trust," which appear on virtually all U.S. money, have been the national motto of the United States since the 1950s. (Photo by Flickr user Kevin Dooley, cc-by-sa.)

On Tuesday, the House of Representatives took a break from bickering over, well, everything, to pass a bill reaffirming "In God We Trust" as the national motto.

“What’s happened over the last several years is that we have had a number of confusing situations in which some who don’t like the motto have tried to convince people not to put it up,” Representative J. Randy, R-Va., said in an interview with The New York Times.

But Kenneth C. Davis said the history of the national motto is varied. It made its first appearance, on money, in 1864, when the Secretary of the Treasury unilaterally had it added to the greenbacks in circulation during the Civil War, to show the Union was fighting with God on its side, David said. But it wasn't until 1956 that it was elevated to national motto status.

"It was created as a Congressional act, in 1956, adding In God We Trust, replacing E pluribus unum," Davis said.

The original motto, which translated from Latin means "Out of many, one," was written by Thomas Jefferson, John Adams and Benjamin Franklin and dates back to the founding of the United States.

It was replaced by "In God We Trust" during the height of the Cold War. Davis said the goal was to show that America and western democracies were fighting with God on their side, unlike the God-less communists.

But there have long been efforts to rollback the motto. In fact, in 1907, the deeply Christian President Theodore Roosevelt tried to get the words taken off of money, Davis said. He felt associating the motto with cash cheapened and commercialized God.

He was not successful.

"To people who believe it, it's a statement of their faith," Davis said.

While the resolution passed with broad bi-partisan support, Davis said that most likely has less to do with politicians truly believing in the bill and more to do with the charged political times we live in.

"You have to be a brave person to vote against God. It's as simple as that," he said.