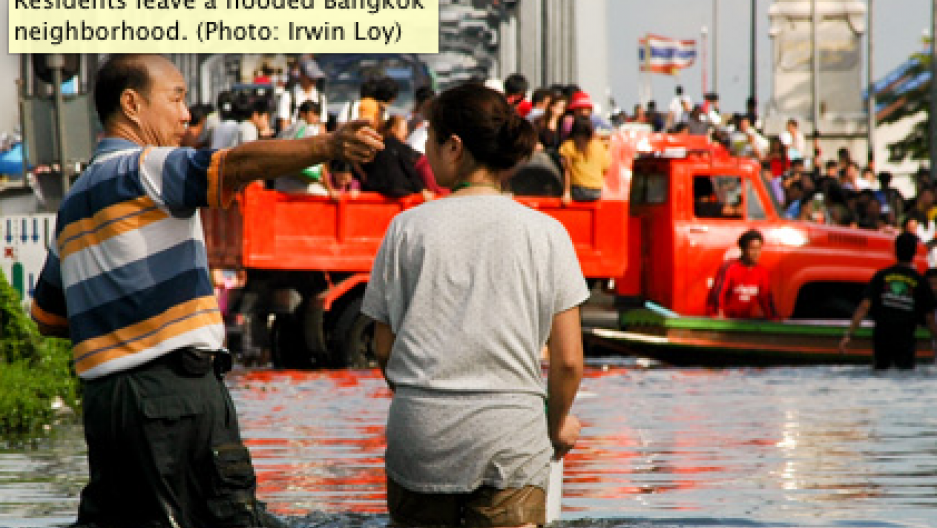 Residents of Bangkok spent another day worrying about rising waters and parts of Thailand’s capital are submerged in some of the country’s worst flooding in more than a half century.

The central core of the capital, however, emerged from the weekend relatively dry and Prime Minister Yingluck Shinawatra told citizens on Monday that the worst of the flooding is over. But it’s little consolation elsewhere in the capital, where entire neighborhoods are covered by several feet of water.

Rattima Srichan stands half-submerged in the middle of a Bangkok street, as she heaves a plastic bag above her shoulders.

When the government first warned that the capital would be threatened by torrential floods, Rattima thought she could weather it. Then this weekend, the nearby Chao Phraya river burst into her neighborhood. Now, what’s left of her home is under four feet of water; there’s no electricity, and no tap water.

“We thought we were prepared,” Rattima said, “but we didn’t know the water would be this high.”

“I’m really afraid for my future. I’m not sure how long the house is going to last,” Rattima said. “My sister’s house has been flooded for a month already. The water will drop two inches one day, then it’ll rise again the next.”

Rattima shook her head when she heard the authorities announced the worst of the floods has passed. She said it’s hard to make sense of that.

“I think it’ll get even worse. This area I live in is full of small businesses. If they could have stopped the floods, they would have it under control by now.”

Wunthring Uthaitaweelarp wades down the street, tapping the ground before him with a walking cane. He’s lived all of his 66 years in this city, he said, and he’s never seen anything like this. His hardware shop down the street is completely submerged. Almost everything is gone, he said.

While some in this neighborhood say the floods couldn’t have been prevented; Wunthring said he knows who to blame.

“The government should be responsible for this! I think it’s the worst government I have ever seen. They don’t tell us the whole story,” Wunthring said.

But not everyone points a finger at the government. According to his daughter, Nanthawang, Bangkok’s citizens have to shoulder some responsibility for today’s mess. The city’s soaring skyscrapers and glitzy shopping malls all sit on a porous layer of swampland. Experts have long warned that the low-lying city is dangerously unprepared for a massive flood event. Nanthawang said she wonders how much of today’s problems are manmade.

“It’s the design of the architecture and the construction. We built all these houses and towers, we blocked the canals,” she said. “Development in the city is also causing the problem.”

On a bridge spanning the surging river, a crowd gathers as an inflatable boat pulls up onto dry pavement. A man lies motionless on a plank; someone shouts that he’s been electrocuted. An ambulance pulls up and the man is loaded into the back.

This is a reminder of just how serious the situation remains. More than 380 people have died in the floods that have inundated Thailand for the past three months — most due to drowning and electrocution.

Though the government is preaching calm, this week it also ordered six more of Bangkok’s 50 districts to be evacuated. Those who have no family on dry land, are diverted to government-run evacuation centers, throughout the city.

Not everyone’s under water. In fact, large sections of the city remain dry. Chainarong Somputthipuchong sits on a plastic chair outside his ground-floor home, staring absent-mindedly at a TV. Across the river, the streets have flooded. Here on the east side, the waters haven’t reached his doorstep, but he’s not sure how long that will last.

“The water will surely come,” Chainarong said. “The other areas are already flooding. I worry when I watch the news. I can’t sleep at night.”

In the meantime, the Thai government is already floating plans for a multi-billion-dollar recovery scheme to rebuild the shattered economy. The project could include new prevention measures, aimed at warding off future flooding in the capital. But for now, Bangkok residents like Chainarong, are still waiting for the waters to rise.