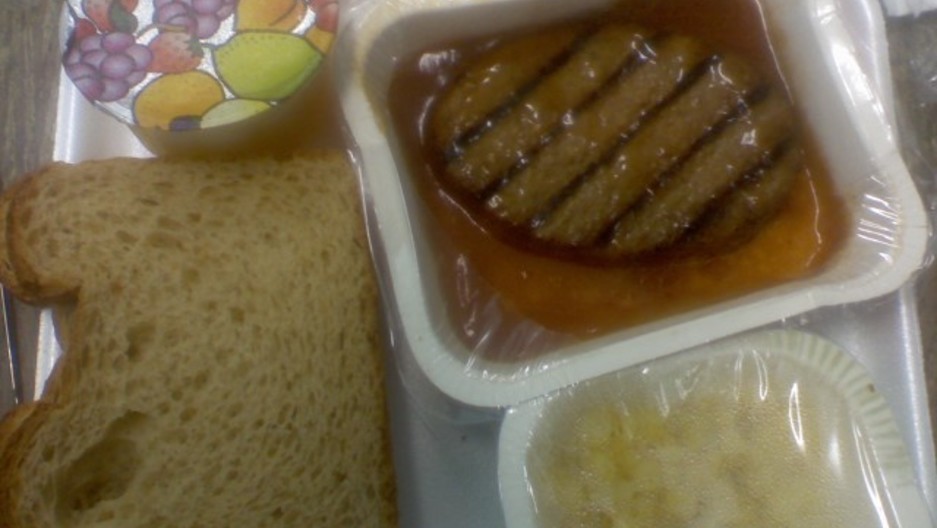 Sarah Wu went on a mission to eat school lunch for a year. This is a Salisbury steak, a hamburger by any other name, she was served. And those grill marks are fake! (Photo courtesy of Sarah Wu.)

For 162 days, the elementary school teacher's lunch consisted of bagel dogs and salisbury steaks, fruit suspended in jello and pear slices drowning in fruit syrup. She anonymously chronicled her days eating the school lunch on her blog, and inadvertently became what one of her own commenters described as the poster child for school lunch reform.

"I had no idea when I started this adventure into school lunch," Wu said. "I just thought 'It's only food. What's the worst that could happen to me?' "

Well, it turns out the worst thing that happened to Wu was she got physically sick. While she can't be sure, she blames the "peanut butter and jelly" she ate for making her sick. The PB&J consisted of an inch of peanut butter, plus some jelly, served atop previously frozen graham crackers.

"You wouldn't have thought that of all the things I ate, the one that made me sick would be peanut butter and jelly," Wu said.

As she blogged, she began to draw links between what was served in the cafeteria and her students' performance — or lack thereof — in the classroom.

"When I saw spaced out children, I could draw line between how they were acting and what we were all eating," she said.

Now Wu has written a book, "Fed Up With Lunch," which examines her project and how to make changes.

At Wu's school, students get just 20 minutes for lunch, which includes getting from their classrooms to the lunchroom, through the lunch-line and to their table and, lastly, eating. Wu said she and her colleagues concluded students ended up with about nine to 13 minutes to actually eat the food. For many of those students, who come from poor families, those nine minutes were all the time they had for their best meal of the day.

Wu said it was common for students to, when pressed for time and socialization, choose to drink a box of chocolate milk and the syrup that the fruit was covered in and consider that to be their lunch. And, when they do eat lunch, often it involves trading the box of chocolate milk for an extra PB&J. On the day Wu got sick, she said she saw one student eat six of the sandwiches — good for nearly 2,000 calories.

While the project started out as merely her effort to document the food being served in her school's cafeteria, it morphed into an effort to improve the quality of school lunches as a whole.

She found out, for example, that many of the food dyes and additives that are often served in her school's cafeterias are banned from foods in the United Kingdom, because studies have shown that they can lead to hyperactive children.

"I heard a lot from parents who were desperate to make changes," Wu said.

And it's not as if there isn't hope. A federal law passed last year gave schools six cents extra per meal in subsidy for school lunches, and also required schools serve more whole grain and more fresh produce.

Wu said there are some companies that serve school lunches that are also making strides. She cited a Chicago company that's trying to serve local produce often in their lunches.

But a lot of those changes take money, and schools are already struggling with the rising cost of lunch.

There's some hope though. Research from Cornell University shows simple changes can actually make a big difference. Steps like putting a light on fresh fruit or putting salads in attractive bowls — or banishing the chocolate milk to the back of the refrigerator — can make a huge difference in the choices students make.

But Wu would like to see more, and she's also like to see more attention drawn to the connection between what's served, how long kids have for lunch and perhaps even for recess — which her students don't get any more — and student performance.

One thing that she wants to make clear, though, is that her project isn't against the school lunch ladies, who she says are among the only staff at a school who touches each student virtually every day.

"They're so devoted to the kids, but they don't feel a lot of pride about the food they're serving," Wu said.

She wants that to change too.