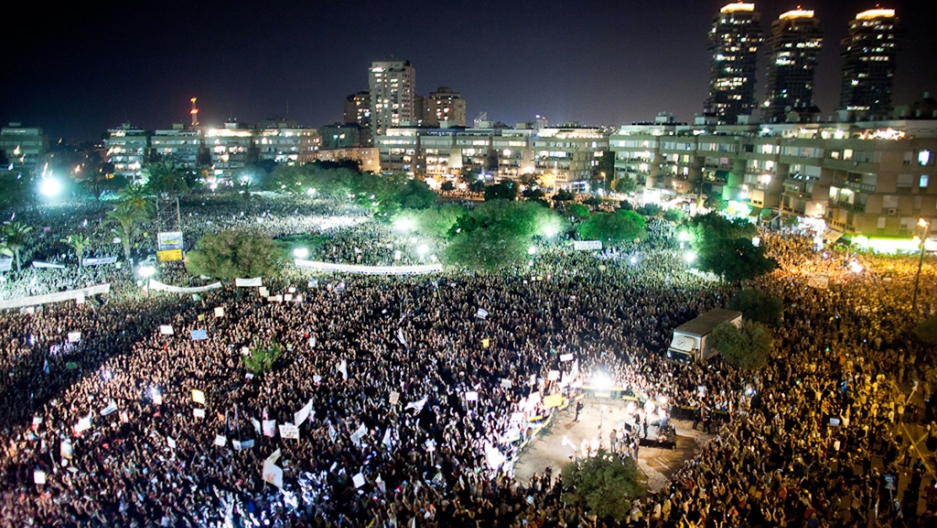 Demonstrators pack the streets on September 3, 2011 in Tel Aviv, Israel. An estimated 400,000 Israelis protested across the country against rising housing prices and social inequalities in the Jewish state.
Credit: Uriel Sinai
Share

JERUSALEM — Israel’s summertime protest movement, which was occupying “Wall Street” before it was cool, can now celebrate their first major tangible success.

At a Sunday cabinet meeting the government approved the restructuring of Israel’s tax system, shifting a few degrees of the social burden onto corporations and the very rich.

On Monday, during the opening day of the winter session of parliament after a three-month summer break, legislators received the new tax plan for approval, alongside a lengthy list of demands for financial reform and social justice that were nonexistent when the Knesset, Israel’s parliament, was last in session and which have been catapulted to the forefront of a pre-electoral year.

As lawmakers gathered it became clear that Likud, the party of Prime Minister Benjamin Netanyahu, hoped the government’s imprimatur of approval on significant changes in taxation would shift credit from the young protest leaders to the party itself.

Speaking to journalists, a Likud party source said, “The only question is whether the public will give credit for the benefits it receives to us, to the [coalition] government, or to the leaders of the protest movement."

Jockeying for credit seems to be the name of the game, even before any legislation is passed.

Social protest leaders, many of them still students, who had organized several demonstrations nationwide for Saturday night in honor of the reopening of parliament, found themselves in the enviable position of appearing calm and collected next to the lawmakers, who months into the protests still appeared to have been caught unaware. Stav Shaffir, one of the protest leaders, described the movement as “a wide open social network filled with hope.”

Defying predictions that winter would tamper the fervor of protest participants, and mentioning her unheated, overpriced apartment, a significant reference for the protesters who have pleaded for the recognition of tenants’ rights, Shaffir said, “We are a country in eternal drought that hates the winter, fears the rain and is quick to forget. We forget the good with the bad, we rapidly ignore despair … and at the same pace we disregard hope. Unlike my flat mate, the prime minister is surely happy winter is coming, but not because our arid land is dry.”

The weekend’s protests were disrupted by a new eruption of skirmishes on Israel’s southern border with Gaza. On Saturday, Israeli drones bombed a group preparing to fire Grad missiles into Israel, killing five members of the Islamic Jihad, which responded with a shower of some 20 missiles, during the next 48 hours, over Israeli population centers.

Schools and universities were closed and all public gatherings were curtailed by the Southern Command. On the Israeli side, several wounded were reported, and one fatality, a resident of Ashdod in his 50s who was hit in the stomach as he emerged from his car.

Both Egypt and Hamas appeared to try and calm tensions along the border between Israel and Gaza, with the three parties “tacitly in agreement,” according to a military source, that Islamic Jihad, which menaces all three, needed to be brought back under control.

Islamic Jihad, a minority participant in Gazan public life, is the party that seems to have lost the most since the agreement to release 1,027 Palestinian prisoners held in Israeli jails in exchange for the Israeli soldier Gilad Shalit was announced two weeks ago.

Egypt, which brokered the final deal, is eager to regain regional standing after a rocky beginning for the military junta that now rules it following the unseating of president Hosni Mubarak last February.

With Hamas still reaping the benefits of having secured the release of the prisoners, Islamic Jihad, which was quick to claim credit for the missiles lobbed into Israel, appears to have wanted to re-enter the game.

Egypt is now acting as a broker between Israel and Islamic Jihad to resolve the current crisis.

The social justice demonstration in the main city of Israel’s South, Be’er Sheva, was cancelled as a result of the unrest and only 20,000 people participated in the main rally in Tel Aviv.

Despite the significant regional instability threatening the country, however, Netanyahu faces an electorate focused instead on internal political demands — such as the breaking up of industrial cartels, the need for massive investment in public housing and tenants' rights.

The mere mention of “only” 20,000 protesters shows how far Israel’s political arena has shifted in the two months since half a million people took to the streets around the country, in what was the largest demonstration in the nation’s history.