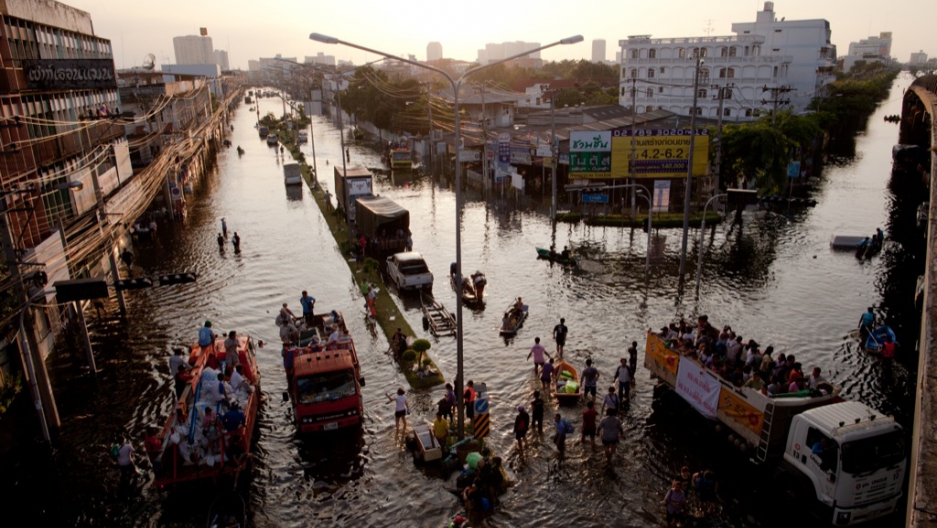 Thai residents make their way across a flooded street close to the rising waters of the Chao Phraya river on October 30, 2011 in Bangkok, Thailand.
Credit: Daniel Berehulak
Share

Bangkok and New Orleans, both founded in the 18th century, are low-lying port cities built in natural floodplains. As they developed, both cities lost protective marshlands and forests to concrete sprawl and deforestation, leaving residents more vulnerable to floodwaters.

Greater Bangkok’s crisis and Hurricane Katrina are not equal in scope: the Thai floods’ rising death tool is at 380 and Katrina killed more than 1,800. A sudden and ferocious hurricane wrought New Orleans’ flooding; Thailand has suffered the agonizing build-up of waters brought by a 25 percent increase in average seasonal rainfall.

But there are parallels between how Americans and Thais, leaders and locals alike, have coped with the costliest natural disasters in each of their recent histories.

Among the Katrina disaster’s most enduring quotes came from Ray Nagin, then New Orleans’ mayor, scolding the federal government in a radio interview: “Get off your asses and let’s do something. And let’s fix the biggest goddamn crisis in the history of this country.”

The Thai crisis has spawned “Listen to me only,” a repeated entreaty from Bangkok’s governor, Sukhumphand Paribatra, to heed his guidance over prime minister Yingluck Shinawatra’s camp. As with Nagin and former President George Bush, Sukhumphand and Yingluck are allegiant to rival political parties.

Thailand’s floods, like Katrina’s, have torn political foes further apart instead of uniting them in the face of disaster. The public sparring has left the public unsure who to trust.

Officials from various agencies have contradicted each others’ evacuation warnings. Accusations that Bangkok officials waited too long to open canals amount to a “myth made up for political reasons,” Sukhumphand told Bloomberg reporters. The mass sandbagging of shops and homes in areas officially predicted to remain dry suggest that many aren’t relying on one agency’s word.

In both cities, flooding depends not just on topography but on man-made structures. New Orleans’ low-lying Lower Ninth Ward, already wracked by poverty, was wiped out when levees burst. Other locales, such as the touristed French Quarter, were spared the worst of Katrina’s wrath.

This has engendered a sentiment of unfair sacrifice in New Orleans’ poorest quarters. Locals even hit the U.S. House of Representatives with a conspiracy theory that levees were secretly bombed to flood the poor and spare the rest. Though unsubstantiated, the rumor is fueled by real events: New Orleans levees were dynamited during 1927 floods to protect certain districts.

From Bangkok: In soaked Bangkok, even the flood shelter is flooded

Around Bangkok, it’s no conspiracy: many districts in Bangkok’s outskirts are being sacrificed to defend the Thai capital. Officials are rightly desperate to save Bangkok, accounting for roughly 40 percent of Thailand’s GDP.

Authorities have protected Bangkok with dikes and sandbag walls around the capital’s perimeter. Though the two sides of the wall aren’t separated by the yawning racial and income gaps seen in New Orleans, some residents on the wet side are resentful.

Fed-up residents northeast of the city — in zones suffering months of trashy, foul-smelling waters — have torn apart flood walls with axes and bare hands. Their demand: make the other side share the pain. Authorities have since tried to ease anger by opening up nearby floodgates.

These “flood mobs,” as Bangkok’s governor calls them, have appeared only in isolated spots. Still, the government appears mindful of escalating tensions.

Yingluck has, according to the New York Times, traveled to several sacrificial zones to explain that a flooded Bangkok will cause “foreigners to lose confidence in us and wonder why we cannot save our own capital.” Roughly 50,000 troops have deployed across Thailand to guard flood barriers and distribute aid.

According to Thailand’s government, the floodwaters backed up north of Bangkok amount to 8 billion cubic meters. That’s 3.2 million Olympic pools worth of water.

Though most of Bangkok may yet be spared, Thailand’s dams and reservoirs have failed provinces outside the city and left an area the size of Kuwait submerged. Experts are at odds over what could prevent this crisis in the future: more canals to drain flooding into the sea, dam improvements or even a new “Ministry of Water.”

But, as in New Orleans, human error appears to have worsened the tragedy. Shortly after Katrina, Louisiana’s leading weather experts used computer modeling to assert that a “catastrophic structural failure” of flood walls exacerbated Katrina’s damage. And in 2009, a federal judge ruled that shoddy maintenance of a major channel led to unnecessarily bad flooding.

From Bangkok: Dam near Bangkok destroyed in anger

Even before the current crisis, Thailand’s ruling party acknowledged the nation’s flooding vulnerabilities. In a campaign prior to July elections, the party blanketed Bangkok with signs that read “Say Goodbye to Flooding” and promised to build a protective 18-mile seawall in the Gulf of Thailand. (However, runoff from the northern hills, not rising seawater, has created the current flood crisis.)

The Thai government this week has owned up to its lacking flood defenses. Officials have proposed a $26 billion spending package — called “New Thailand” — that will overhaul water management systems and rebuild damaged areas.

But with mixed assessments of New Orleans’ recovery, and warnings that a category 5 hurricane could bring a Katrina redux to the Big Easy, it appears that massive spending alone can’t restore greatness to a devastated region.