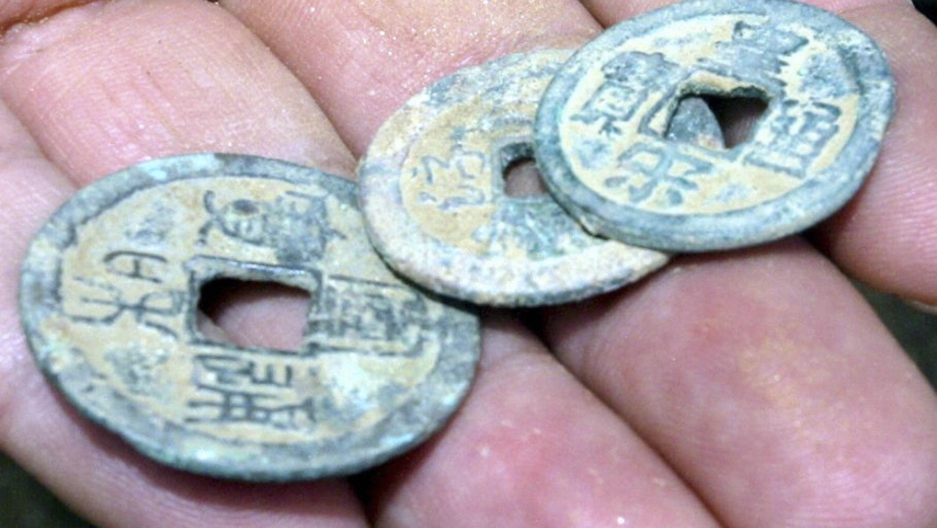 Coins dating back to the Song Dynasty (AD 960-1279) were discovered at a site in Xian, central China's Shaanxi province, July 12, 2005, once the world's most thriving metropolis and served intermittently as the capital of 11 dynasties for 1,068 years from the Western Zhou Dynasty (771 BC). Much of China's cultural heritage is fast disappearing with ancient sites regularly damaged or destroyed for relics which are smuggled overseas to meet booming demand.
Credit: STR
Share

The discovery of a 300-year-old Chinese coin in the Yukon is shedding light on ancient trade routes, Canada's Postmedia News reports.

The coin was discovered by archaeologists near a proposed gold mine site about 185 miles northwest of Whitehorse in Canada's Yukon territory.

According to Postmedia News, the coin appears to have been minted during the Qing dynasty reign of the Manchu emperor Kangxi, who ruled China from 1662 to 1722. Other information on the coin shows it could have been minted between 1667 and 1671 in Zhili province, around where modern-day Beijing is located.

Postmedia News reports that the discovery  of the coin is "shedding fresh light on historic trade links between 17th-century Chinese merchants, Russian fur traders and First Nations in the northwest corner of North America."

Archeologists found the coin during a heritage impact assessment for the Western Copper and Gold Corp. at their proposed Casino mine site.

According to a statement by the team of archeologists, this was only the third Chinese coin to be found in the Yukon. Many more have been recovered from sites along Alaska's coast.

"The coin adds to the body of evidence that the Chinese market connected with Yukon First Nations through Russian and coastal Tlingit trade intermediaries during the late 17th and 18th centuries, and perhaps as early as the 15th century," the statement said.