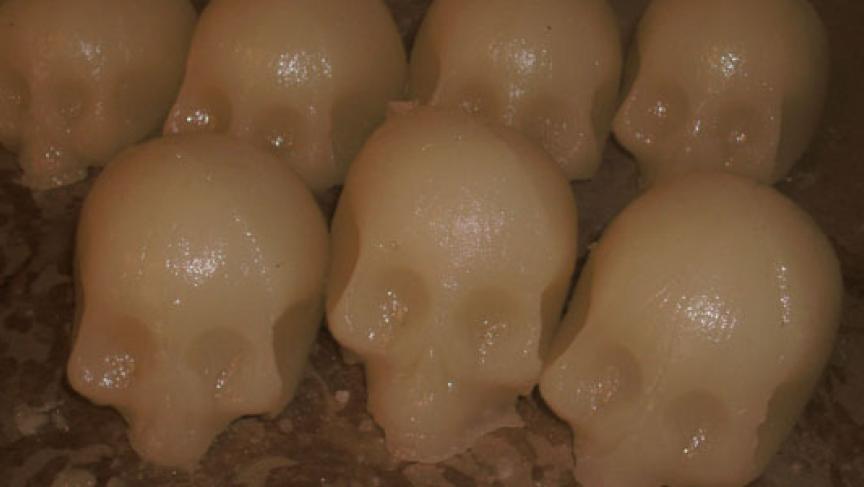 At the National Museum of Mexican Art in Chicago, 20 high school students from Ohio watch as blocks of white sugar are transformed into calaveritas de azucar — sugar skulls.

Alejandro Mondragon said at one time, about 80 families in Mexico made the sugar skulls, which are an integral part of the Dia de los Muertos — Day of the Dead — festivities. Today, only 10 produce the seasonal treats. The Mondragon family is famous for its candy business in Toluca, in southern Mexico.

In a house near the museum, Mondragon watches a copper cauldron with boiling syrup — 10 parts sugar and one part water. It’ll take two hours to cook before it’s ready to be poured into clay molds.

“I was the one in the family who really enjoyed making them,” Alejandro said. “We have 12 brothers and sisters in our family. Maybe it’s the vanity talking, but I was the one who taught my siblings how to make them. I was the one who worked the hardest on these candies. Because I always liked sweets.”

The skulls come in a variety of sizes, from as small as a quarter to as large as a human head. The Mondragons worry the 150-year-old tradition won’t last many more generations.

Alejandro’s 9-year-old grandson wants to follow in his footsteps. But Mondragon can’t be sure the boy will stay interested.

"It’s a very lonely job," Mondragon said. "You’re indoors all day. You don’t leave the house for anything. No parties. Nothing when you’re working. But I don’t want the tradition to die. Right now, the person who’ll most likely continue is my daughter the one who’s with us here in Chicago.”

Back at the museum, Mondragon’s daughter, 32-year-old Elvira, holds bags filled with sugar, lemon juice and vegetable based food coloring. She decorates each skull by hand with bright colors and vibrant patterns.

“At the end of the day, we’re all going to die,” she said. “And death is part of life. That’s why we decorate the skulls with vibrant colors. So that people understand it’s not something sad. Mexicans love day of the dead. Because we remember those who are no longer with us.”

The Mondragons will make about 25,000 skulls before going back to Mexico in November. 61-year-old Mondragon has type 2 diabetes and only one kidney. He’s not sure how much longer he’ll travel to Chicago to make the candies. His daughter knows it’ll be up to her to continue the family tradition.

“Here and in Mexico, there are many doctors, many architects,” Elvira said. “But what my father does making sugar skulls, we have a lot of pride in this. Because in Mexico there aren’t too many people who do this. And in the United States, there’s nobody. He’s the only one who dedicates his life to this …We have to take advantage of this craft that our ancestors left for us.”

As the students from Ohio snacked on the sugary treats, 16-year-old Brendan Bilek patiently waited for a baseball sized skull to be decorated, in memory of someone in his family.

“I’m looking at a sugar skull for my cousin Brian,” Bilek said. “He was a DJ and me and him were very very close. And I believe he passed of an accidental drug overdose a little over a year ago.”

Bilek sid when he brings the skull back to Ohio, he wouldn't be eating it.

"That would be kind of disrespectful," he said.