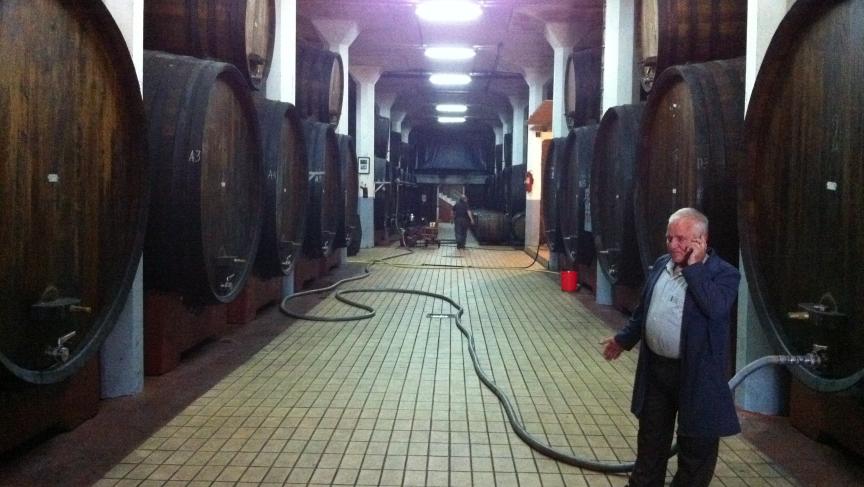 Stone Castle winery, pictured, is one of the largest sources of wine in Kosovo. They're trying to break out into large foreign markets.

In the cellar of Kosovo's largest winery, Stone Castle, the air is thick with the scent of oak and wine.

General manager Shani Mullabazi sips a glass of the 2010 Chardonnay.

"It's fresh. Has a really optimal acidity, is crispy, and very good in the mouth," he says proudly.

Stone Castle winery is situated in Rahovec, an area in the south-west of Kosovo.

Called Orahovac by the minority Serb population, it has been Kosovo's main winemaking area for centuries.

Its table wines once flowed to the rest of communist Yugoslavia.

"By the 1980s, Kosovo had long had a good reputation, especially for Pinot Noir," says Angela Muir, a wine consultant with expertise in the former Yugoslav region.

"And by the 1990s, it had a well-established link with a very big volume brand in Germany."

But Kosovo's wine industry collapsed as Yugoslavia disintegrated in the 1990s, and much of the infrastructure was destroyed by war.

After the fighting subsided, a number of state-owned wineries, including Stone Castle, were privatised, and production began to recover.

Now, an optimistic air has returned to the Kosovan wine industry.

Economist-turned-wine-producer, Miro Brkic, who lives in Rahovec, says with its average 270 days of sunshine each year, the area remains an ideal spot to make fine wine.

Go south to Macedonia, he says, the grapes have too much sugar. Go north to Serbia, and they're too acidic, he claims.

Stone Castle's Shani Mullabazi claims his company is operating at near-full capacity, producing around 30 million liters (114 million gallons) per year. And he says more people outside Kosovo are getting a chance to try Kosovan wine.

The company is exporting table wines in bulk once again to Germany. And it's trying to break into the lucrative American market. This summer, it sent a shipment to New York, where there's a large community of Kosovar Albanians.

"We have a very good diaspora in the US," says Mr Mullabazi. "They have very good friends, American friends, and they're drinking our wine together."

At least one American wine writer has given the new imports a favourable reception.

"I think they could have a place in the (American) supermarket or wine shop," says Warren Richard, who blogs for the website Virginia Wine Time. "The biggest challenge is going to be recognition," he says.

To achieve that, Mr Richard says, Kosovo must become known for producing a particular variety of wine, like Chianti in Italy, or Chardonnay in California.

Back in Rahovec, that advice is being followed by Visar Hajrullaga, who's been getting help from the German government to learn some sophisticated winemaking techniques.

In his low-key winery, Mr Hajrullaga is experimenting with Vranac grapes - which are native to the Balkan region.

"This grape juice will give wines with 14," he says, meaning 14% alcohol - a higher alcohol content than is usual among Kosovo's red wines.

Mr Hajrullaga is hoping his work will yield a so-called signature variety.

His Vranac wine, he says, will soon appear on Kosovo's supermarket shelves - a first step, he hopes, to a wider market.

But if Kosovo's energetic winemakers are intent on selling to more countries, and achieving greater international recognition, they still have a few hurdles to jump closer to home.

In the past three years, they've been hindered by a de facto trade embargo with Serbia, which was imposed in retaliation for Kosovo's unilateral declaration of independence from Belgrade in 2008.

That hit the Kosovan wine industry hard, and at a time when it was just recovering from the wars of the 1990s.

Now, agreements have been reached to open the way for trade to — and importantly through — Serbia, once more.

For Kosovo's winemakers, the hope is that despite ongoing political quarrels, the day may soon come when they can truly brandish their wines on a bigger world stage.