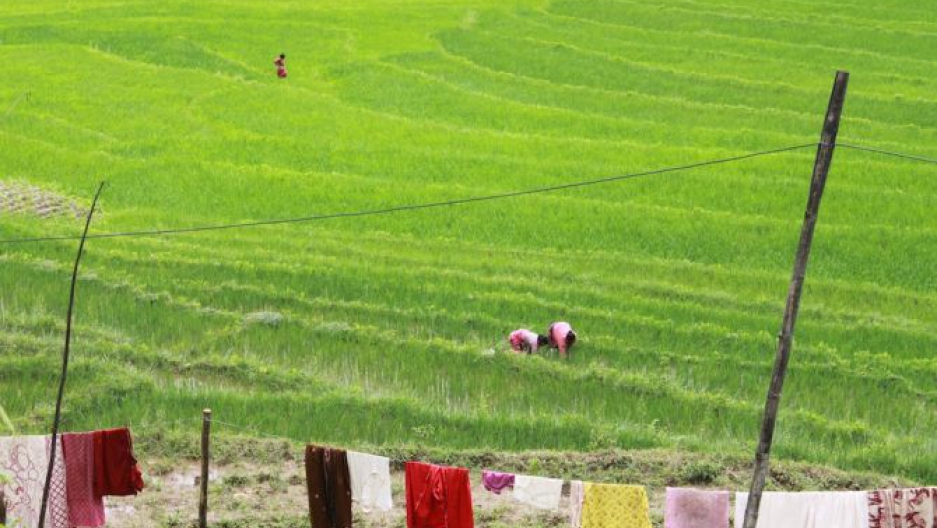 When Sanani Balami (center) was about 12 years ago, her parents took her out of school and soon married her off. She now has two children, who help her work in the fields. “There is no chance of saving money,” Sanani says.
Credit: Hanna Ingber
Share

KATHMANDU, Nepal — When Shyam Balami was a teenager, his aging parents decided they needed more help around the house. They told him it was time to get married. They looked around and settled on a girl in a nearby village outside Nepal’s Kathmandu Valley.

Sanani was two years younger than Shyam. She came from a big family, and there was not enough money for everyone to go to school. Sanani’s parents took her out of school at age 12 and had her work in the fields and care for her younger siblings. She hoped to one day go back to school.

But that never happened.

When Shyam was about 16 and Sanani 14, their parents decided to marry the two, ending the girl’s dreams for an education and sparking a spiral of poverty that has no end in sight.

“I was very interested in education, but as soon as my marriage took place, how could I leave all this household work behind?” Sanani says as she sits insider her in-laws’ home, a mud house with a corrugated metal roof and goats tied to posts out front in Kagati village on the outskirts of the capital, Kathmandu.

Child marriage is extremely common in Nepal, which has a population of 30 million. The United Nation’s Children’s Fund (UNICEF) has found that 51 percent of Nepalese married as children. Nepal’s 2006 Demographic and Health Survey found that among Nepalese women age 20 to 49, 60 percent were married by the time they reached 18.

The practice has a deep impact on the educational opportunities for the country’s young. Once girls like Sanani marry they typically drop out of school to begin taking care of their in-laws’ home and start producing children. They have little opportunity to re-enroll as there are few schools in Nepal with such programs, according to Khem Karki, the executive director of SOLID Nepal, an organization that works on sexual and reproductive health.

Soon after getting married, Sanani’s in-laws pressured her to have a child.

“As soon as you get married, you should have children,” Sanani’s mother-in-law, Suntali, says as she takes a break from grinding chili pepper on a mortar. “Children are gifts from God.”

Suntali also says it was important for her daughter-in-law to show that she was fertile.

The young mother now spends her days caring for her two children, cooking and cleaning for the family and working in the fields.

“There is no chance of saving money,” she says as her two-year-old daughter sitting in her lap begins to cough.

Sanani’s husband, Shyam, went to Malaysia to work but got injured and has been sent back to Kathmandu. He spends his days limping around a hospital and wondering what will happen to his family.

“Child marriage hampers the whole life of a woman,” he said.

Local child rights groups, international donors and the Nepali government are working together to delay marriage among the country’s young people. Civil society groups like SOLID Nepal are working to bring awareness and education to rural communities about the dangers of child marriage.

Some progress has been made. The proportion of women who were married by 15 has dropped from 25 percent of women between the ages of 45 to 49 to 6 percent among young women now, according to government statistics.

And yet, the problem persists.

What is needed is getting more girls in school and preventing dropout rates, said Anand Tamang, the executive director of the Kathmandu-based Center for Research on Environment Health and Population Activities (CREHPA). This empowers girls to negotiate with their parents and say no if they push them to marry early.

“The government in a resource-poor country like Nepal must create more female-oriented jobs even in rural areas,” Tamang said.

The practice has been very difficult to change because marriage is a social issue and there are many different stakeholders involved, Karki said. He argued that for there to be real progress on delaying the age of marriage in Nepal, there needs to be coordination between the various sectors such as health, education, poverty and culture. No one, including the government, is ready to coordinate such a comprehensive undertaking, he said.

“The government is not ready to address this issue comprehensively,” he added.

“Even if the government wants to do it, it cannot,” said Professor Sharad Onta in the department of community medicine and family health at Tribhuvan University’s Institute of Medicine in Kathmandu. “The government is so busy in other issues.”

Onta argued that Nepal’s government, like that in any country, has limitations, and therefore its role must be to provide a broad framework and facilitate civil society, which it is doing with limited success.

The Nepalese government has enacted strict legal provisions regarding early marriage and argues that it promotes education and awareness about the practice. By law, a woman or man must be 20 to get married in Nepal, but that law is not enforced.

“The education level is going high, poverty is reducing and age of marriage will increase as well,” Mishra from the Ministry of Health and Population told GlobalPost from his Kathmandu office.

The message is spreading. Many mothers like Sanani told GlobalPost that while she married young, she does not want the same thing to happen to her daughter.

“I know the disadvantages of getting married early,” Sanani said. “I don’t want my daughter to face the consequences I have,” she added, before wading through a muddy field to pick paddies.

Funding for this project was provided by the Pulitzer Center on Crisis Reporting.