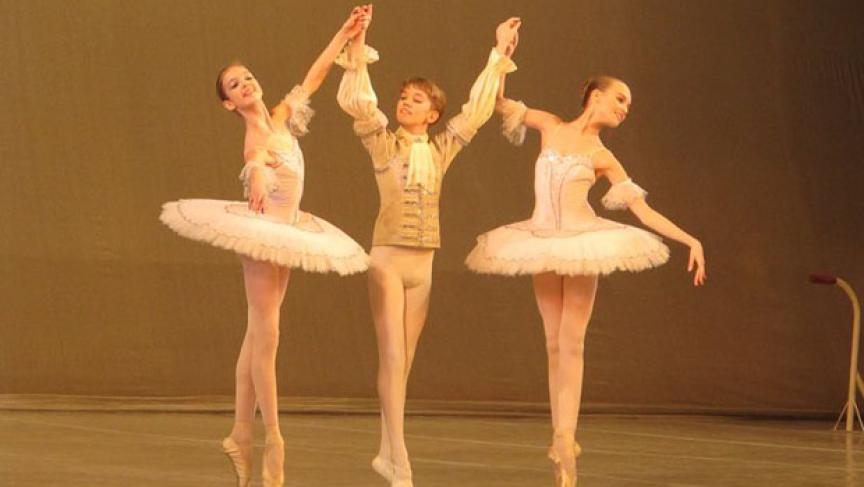 Julian MacKay (center) is one of the the youngest Americans ever admitted to the Bolshoi Academy (Photo: Teresa Khan)

Share
And with that, dancers took to the stage at Russia's finest theatre, for the first time in more than six years, after more than $700 million in renovations. Muscovite Maria, who didn't want to use her last name, braved the wind and cold to see the opening gala. "This is like a big holiday for us! This is a beautiful theatre. The opening is so important for all of us, for Russia, for Moscow. This theatre is the face of all Russians," she said. And well, that's what brothers Julian and Nicholas MacKay want to change. They're 14 and 10 — the youngest Americans ever admitted to the Bolshoi Academy, the training ground for the big stage. They were relegated this weekend to watching the historic performance outside, on giant TV screens, dwarfed by the historic theatre and a nearby statue of Karl Marx. They've been dancing at the Bolshoi Academy for three years and two years respectively. Julian says it's been a struggle; both teachers and students were hard on him. "Some of them don't like the United States, they think, "Oh … Americans." I got a lot of that, especially from the kids. After I became friends, you kind of realized it's not them saying that, it's the old generation," said MacKay. Brother Nicholas agrees that being from the land of baseball and apple pie isn't exactly something to brag about. He says it was hard to make friends when he first arrived, though American culture is certainly catching on. The boys agreed to meet me after 14-year-old Julian had his birthday party at the Chili's restaurant on Arbat Street. "If I had understood some of the things they said, I don't think I'd be very good friends with them right now," said MacKay. The sweet faced, all-American boys came from Bozeman, MT to attend arguably the best ballet school in the world. Their mother Teresa Khan, wasn't exactly on board when eldest son, Julian, got an invitation from the Academy at the age of 12. "When he got the invitation for Russia, I said, "No I'm not going." It wasn't necessarily on my bucket list to do," said Khan. But the family is something of a ballet powerhouse. Khan says she relented after talking to her daughter, who, along with her sister, is dancing at the state ballet in Munich, Germany. "My son would resent it. Sooner or later he was going to realize, it's the Bolshoi. I had the opportunity. The door opened and I didn't run through it because my mom and dad wouldn't let me," said Khan. And both her boys have been running towards that Russian stage door ever since. Julian and Nicholas spend up to 11 grueling hours, every day, on their young feet. Blue-eyed Nicholas, the 10-year-old, looks unfazed and smiles when he describes his typical day, which includes 10 classes. "I get up about 7:30, got to school. I have Russian class, then ballet class, maybe gymnastics, historical dance class and repertoire. The final class ends at 6:30. I come home and do home schooling with my mom," said MacKay. Brother Julian, 14, says sometimes his schedule gets to be more than a bit overwhelming. "I do feel like that everyday, but I think you have to push through it. It's after the long days of class your brain hurts, your legs hurt, everything hurts. I really feel that definitely it's a challenge. It's something you just have to push through," said MacKay. And Julian's commitment has caught his teacher's attention. He's recently been placed in quite a few Bolshoi performances. "It's really been quite an experience. I was in Esmerelda, Paquita, Sleeping Beauty…," said MacKay. Julian even danced with principal Natalia Osipova when he was 13 in Coppelia. It was broadcast live and aired in more than 300 theaters in 22 countries. "I'm standing here and there is Osipova standing right there! And she's right there, dancing on the same stage!" said MacKay. Little brother Nicholas has even gotten in on the action, although he would have liked to have had a slightly bigger part. "I danced in Napoli on the Stanislavsky stage. I basically had to act like a monk. I had a very long, like black dress thing. I was the priest holding the cross to bless the boats. It's a start," said MacKay. Many people would argue that being at the world famous Bolshoi Academy at such a young age is more than just a start, but both Julian and Nicholas are very disciplined and focused; though they admit it's still tough keeping up with the Russians. "I think Russians are a bit too harsh, but they really care about their students. As you get older, they get more tough on you. I think it's tough love," said MacKay. It's that tough love that both boys say they've come to appreciate and expect from their teachers. They both hope to graduate from the Academy and join the Bolshoi as a principal dancer one day… even though it may be a rough road ahead. Julian says he isn't fazed because he says at least that path has been blazed by David Hallberg, the first-ever American to join the Bolshoi as a principal dancer. He starts in November.