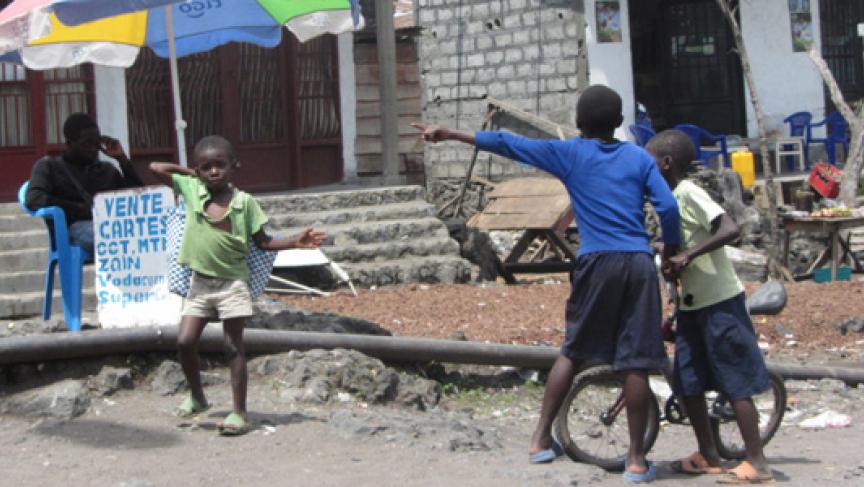 Children on the streets of Goma, Congo. (Photo by Mary Kay Magistad.)

Your mobile phone, your computer, most of your electronics have minerals in them that can be found in the Democratic Republic of Congo.

Mineral mining there has helped fuel 15 years of conflict and cost some five million lives. Legislation passed in the United States last year, as part of the Dodd-Frank Act, prohibits U.S. electronics from using conflict minerals from Africa. Consequently, American and European countries are withdrawing until a system is developed to certify minerals as conflict-free.

And that's created a void that one country — in particular — is trying to fill.

A single lantern lights the living room of Jason Luneno Maene. He’s a civil society leader and he's running for the National Assembly in next month’s election. Maene said Chinese mineral buyers now have a virtual monopoly in Goma.

“They are paying 20 percent less, maybe even 30 percent less than the old price, because now they are the only buyers,” he said. “The lower price means fewer people are bringing minerals to sell, and a lot of mines have suspended operations. But the Chinese are buying what comes to them. Their warehouses are full, with constant turnover.”

Goma, a dusty border town that has long served as a clearing house for the minerals mined in this region, is hurting. Its Belgian colonial buildings are crumbling. Its roads are ripped up and dusty. Corruption is rampant. In the evenings, frequent blackouts mean residents often have to feel their way in the dark.

The Chinese buyers in Goma are especially interested in tin and in coltan – a metallic ore that contains tantalum. Tantalum stores energy and is resistant to high temperatures, and is used in everything from mobile phones and laptops to jet engines and space vehicles.

Congo’s coltan also contains a bonus metal – uranium. The Democratic Republic of Congo has rich reserves of uranium. It the supplied uranium for the nuclear bombs that hit Hiroshima and Nagasaki. But soon after independence in 1960, the government filled the shafts of its main Shinkolobwe mine in Katanga with concrete, and said Congo would save its uranium for future generations.

William Mishiki Buhini, the traditional chief of a huge mineral-rich and conflict-ridden region in Congo called Walikale, says buying Congo’s coltan or tin can provides backdoor access to uranium — as long as the buyer has the means to separate it from the other materials being purchased. It just so happens China has a tantalum smelter in the province of Ningxia.

"When Europeans were buying minerals, they wouldn’t accept uranium content of more than two percent, because the radiation was considered too dangerous,” he said. “But the Chinese don’t care. Even if it’s at five percent, they still buy the minerals.”

Mishiki said Chinese purchases of minerals are keeping this region’s mining industry limping along, though at a much lower level of production than before. The regional government depends on mining proceeds for more than half of its budget. And while he said he’s all for taking armed groups and the military out of Congo’s mines, he said the pullout of Western buyers has gutted the local economy in the short term.

“Since this Dodd-Frank Act was enacted, there are more people recruited into army groups than before,” Mishiki says. “Because all these guys … who used to depend on the artisanal mining, they are jobless now. They have mines, but they cannot sell. So they have to go where they can survive. And the only place to go, because there are no factories … the only way to survive is to be recruited into the army groups. And then they can go somewhere and try to make money to survive.”

That’s not what advocacy groups like Enough: The Project to End Genocide intended when they ran ads lobbying for the Dodd-Frank legislation, with college kids holding up cell phones and saying: “I don’t want my cell phone to fuel a war." "This is the next blood diamond." "I want peace in Congo.”

The ad called on electronics companies to clean up their acts, and stop using minerals from mines controlled by armed groups.

Some of the armed groups have terrorized local communities, raped women and forced children, at gunpoint, to do the mining. When the Dodd-Frank Act first passed last year, Fidel Bafilemba, Enough’s East Congo consultant, said some Congolese army commanders took it as an opportunity to push out artisinal miners and take over some mines themselves.

When the markets dried up, Congo’s government made the Congolese army pull back. Bafilemba said about 60 percent of the mines are now free of armed groups, and the government is taking further measures.

“All the illegal taxes are going to be cut off,” he said. “And instead of the military controlling the mines, the Congolese government is going to deploy mining police to secure the mines, and also securing the trading routes, so the minerals can come to the trading centers.”

For the first time, the government will make sure a portion of proceeds from minerals sales goes back to the mining communities, for hospitals, schools and roads. Mishiki said it’s about time.

“The people who were digging, the people who were suffering…there’s not even a house with bricks. They live like animals. They make pee in the rivers. There are no environment conditions respected. Because the government is making money, they don’t care. If you compare our country with our neighbor, Rwanda, it’s a shame. Rwanda doesn’t have any resources. But look at the economy of Rwanda. Look at the education system. It’s a matter of proper management. If we could manage this country properly, we wouldn’t need the Chinese.”

China is not only buying minerals in the troubled Kivu region of East Congo. It also has a $6 billion resources-for-infrastructure agreement with the Congolese government. The program had been larger — $9 billion — until the World Bank and IMF voiced concerns that servicing such a huge debt would be beyond Congo’s reach.

Other criticisms included that the terms of the deals are vague and opaque, that it wasn’t clear how the minerals would be priced, and that the deal included an agreement that Congo would repay China first, before repaying any other outstanding debts.

The Chinese government has called this, and other deals in Africa like it a win-win. China gets the minerals and other resources it needs for its rapid development. African countries get infrastructure built by experienced Chinese teams. Mishiki, who has been a government minister and aspires to be president, says it’s not ultimately a great deal for Congo.

“I can say, frankly speaking, that we are the losers,” he said. “But we didn’t have a choice. I support President Kabila, really, in this contract. Because, here in Congo, we have a lot of resources. But we don’t have the capacity to bring these resources out from the ground, to transform them into wealth.

Mishiki said one way to create wealth in East Congo would be to diversify the economy and make it less dependent on mining. As a start, he said, he has shifted out of the mining business and is instead running a farm in Walikale, growing coffee and other crops and employing some 2,300 people. In a region with some 800,000 people, it’s a start.

So are the Congolese government’s initiatives to rid East Congo’s mines of armed groups, said Annie Dunneback, a senior campaigner with the advocacy group Global Witness. She just visited Goma and the Kivu region, and praised the government for having issued a directive in September that the mining sector has to adhere to international due diligence standards – checks companies have to perform on their supply chains.

“And when we were in Eastern Congo, we spoke to some of the Chinese companies, who were very clear about the fact that the priority for them was to respect domestic law, and follow any directive that the Congolese government handed down,” Dunneback said. “So companies in the U.S. and Europe have to adhere to new standards. But now these standards are also being replicated on the ground in Congo. So there should eventually be a more even playing field and a sort of harmonization across supply chains.”

For now, the playing field is still a bit bumpy. Dunneback says smuggling to nearby Rwanda did pick up in the months after the Dodd-Frank legislation passed. But then, the Congolese government lowered export tax on minerals – to make people think twice about whether it was worth taking the risk. A Congolese lieutenant was recently given a three-year prison sentence for smuggling. And, this month, the Rwandan government pledged to return to Congo up to 90 tons of smuggled minerals it has confiscated.

There are also still hurdles to clear before the Dodd-Frank legislation takes full effect. The Securities and Exchange Commission has to come up with standards for electronics companies to meet to be in compliance, and the U.S. Chamber of Commerce, one of the biggest conservative lobbying groups in the United States, has threatened to sue the SEC if the standards prove to be too costly or cumbersome.

But Chris Hazen, Asia director of WSP Environment and Energy, a consulting group that works with electronics firms on supply chain issues, said the Dodd-Frank Act might end up being a good thing for the electronics industry, as well as for miners in the Congo

“There is value to industries, like the electronics industry, to have common standards and processes which eliminate a reputational risk for the industry,” he says. “The risk of reputational damage from coltan mining practices in Central Africa has been known about for some time, And a big unknown was when it might blow up for any given company. Dodd-Frank has helped to create a bit of a wellspring of momentum to help come up with industry-wide solutions.”

Removing the risk includes making sure factories in China aren’t using conflict minerals in electronics destined for the US market. China may be cleaning up on minerals for now – but if Americans really don’t want their gadget habit to fuel conflict in Congo, enforcing a clean supply chain could soon become China’s business, too.