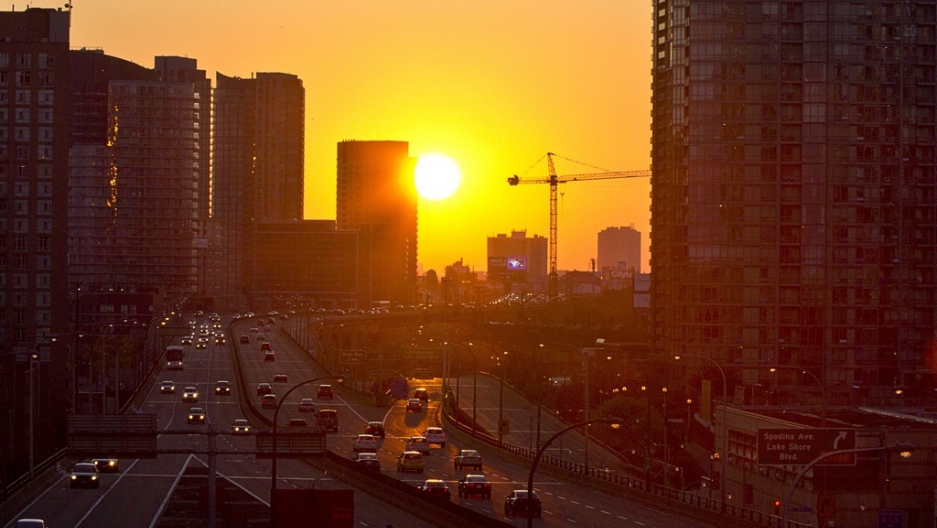 TORONTO, Canada — On the short drive from his home in the inner-suburb of Etobicoke, Joe Vaccaro counts the cranes.

These days, there are 17 sprouting along his route, many alongside the lakeshore highway that has become this city’s condo alley.

Toronto is in the midst of the longest sustained housing boom in its history, a decade-and-a-half run that’s seen housing prices more than
double and thickets of shiny condominium towers forever alter the city’s distinctive skyline.

It’s a market that’s the envy of North America, outpacing building in centers many times its size and attracting international investment that a few years ago would have migrated elsewhere, especially to the U.S.

According to Emporis — a Frankfurt-based research company that tracks multi-story buildings — there were 132 high-rises under construction in Toronto in September, far ahead of the next most-active center, Mexico City with 88, and third-place New York with 86.

(Rounding off the top five: Chicago and Miami, with 17 and 16 respectively.)

In addition, there are about another 120 projects in “pre-construction,” says Vaccaro, whose organization lobbies governments on behalf of the building and development industry.

So why is Toronto, with its dank, miserable 5-month-long winters, the hottest condo market in North America?

Among the reasons, say industry analysts and insiders, is that the Canadian economy was left relatively unscathed by the Wall Street collapse of 2008. The housing market in particular proved resilient, quickly shaking off the ripple effects of the crash south of the border.

Earlier this month, U.S.-based Forbes magazine ranked Canada as the best place on the planet to do business. The U.S. came in 10th.

As the economic hub of the country, responsible for fully 20 per cent of its GDP, Toronto benefits greatly from such global attention. “We’re seen as a safe haven for foreign investment,” said Vaccaro.

The city is also a major immigration destination. Federal immigration policies continue to attract large numbers of new Canadians, most of whom are drawn invariably to the big cities, especially Toronto. An estimated 100,000 new residents move into the greater Toronto area each year, a growth rate closer to that of cities in Asia than any in North America.

In addition, immigration rules favor migrants with assets, meaning many jump quickly into a housing market that, despite rising prices, is still a bargain by international standards.

Toronto is bordered by a ‘green belt,’ ringing the city at the edges of its vast suburbs. Imposed by the province of Ontario in 2005 largely as an environmental measure, it has helped contain suburban sprawl, forcing developers to move away from traditional housing tract development and to look skywards.

The result is a city that gleams in the late afternoon light, a magnet for big money and big names.

In May, a 9,000-square-foot penthouse sold for $28 million ($27.5 million U.S.) — a record for a Canadian condominium — to an undisclosed foreign buyer. The unit sits atop a residential complex that also houses a Four Seasons Hotel, one of the world’s foremost luxury chains.

Similar mixed-use complexes by Asian luxury giant Shangri-La (offering what it calls “private estates from $2.9 million”) and Trump (although ‘The Donald’ is reportedly only a minority stakeholder) are scheduled to open in 2012. A 53-storey Ritz-Carlton, with 159 “managed condominiums” opened its doors earlier this year.

According to the Canadian Real Estate Association (CREA), 1,870 condominiums sold in Toronto in September — up 23 percent from a year earlier — while the average price climbed 9 percent to $330,500.

“The Canadian housing market remains a bright spot against a backdrop of mixed headline news about the global economy,” said CREA president Gary Morse in a recent statement.

“Up to now, you open on Monday, you’re sold by Friday,” said developer Mel Pearl, with just a hint of exaggeration.

Pearl’s signature luxury project is Bisha, a hotel and residential complex in a prime downtown location across from a restaurant co-owned by hockey icon Wayne Gretzky.

But he also has a stake at the market’s other extreme, a project called Karma, which has the distinction of offering what may be the tiniest units — 277 square foot ‘studios’ — ever to go on sale in Toronto.

“They’re the smallest I’ve ever seen,” said realtor Michael Klassen but, with prices as low as $199,000, they’re being snapped up by investors. “No joke,” said Klassen. “I cannot get ahold of enough units for this building.”

The attraction for investors is simple math: with a market that in recent years has appreciated 8 to 9 percent annually, even the smallest units are an attractive investment: bought “pre-construction,” they’re worth considerably more by the time they’re built.

It’s estimated that fully 60 percent of the units sold in the Toronto market are snapped up by international investors, many from the China and South Asia.

The incessant demand has created a sales hierarchy that can be byzantine and often puts a domestic buyer interested simply in a place to live at the bottom of the list.

Klassen describes it like this: Typically, the first block of units is offered to “friends and family” of the project principals, followed by ‘VVIPs’ or preferred sales agents with steady and reliable rosters of buyers. Then come ‘VIPs’, agents with proven track records, followed by “regular brokers” and, finally, the public.

Of greater concern to many are fears that the market will invariably overheat and collapse.

Bank of Canada Governor Mark Carney warned earlier this year that too much inventory could lead to “the possibility of an overshoot in the condo market" in Toronto.

But industry analysts have been predicting for years the end of the Toronto boom, and so far they’ve been wrong.