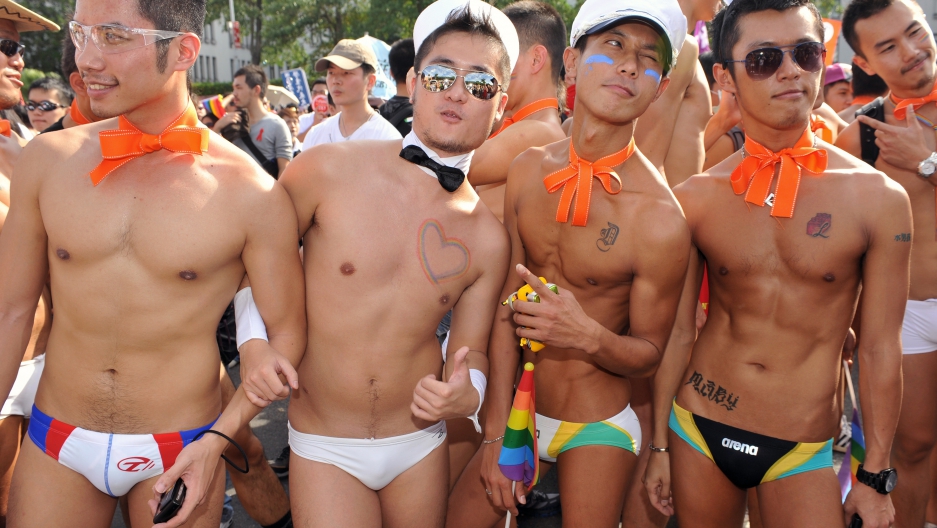 People march on the streets during the annual gay parade in Taipei. Thousands of people from Taiwan's gay and lesbian community marched in the streets of Taipei to demand recognition of same-sex marriage and equal rights.
Credit: Sam Yeh
Share

TAIPEI, Taiwan — One could be forgiven for thinking everyone in Taipei was at this weekend's gay pride parade.

Fifty-thousand rainbow-colored revelers snaked their way through the center of the city on Saturday, waving flags and wearing costumes, together marking Asia’s largest gay and transgender parade.

But there were some glaring absences — namely, the island’s politicians, who didn't show despite the free TV time on offer during an election season.

“Our politicians know it’s the right thing to do, but they are slow to react and way too scared about losing votes,” said Addy, who sported a flashy silk wedding gown during a symbolic marriage to his friend Andy at the parade.

“In Taiwan, it’s the people who are progressive. Politicians are a dead weight to the idea of progress,” he said.

It was a pervasive message throughout the parade: Taiwan’s burgeoning democracy — ushered in with the island's first direct elections in 1998 — has lost steam in protecting the rights of minorities, according to activists. In some cases, Taiwan is backsliding towards more conservative positions, they say.

While attempts to seek comment from the candidates were unsuccessful, the DPP's Tsai said in a speech last week that if elected she "would work towards protecting the rights of all, regardless of sexual orientation as long as certain social conditions were in place."

However, a lack of a concrete legislative road map to full or common partner rights have met with a tepid response from community leaders.

“We don’t believe or trust the politicians. They’ve said they would support us before. We need to push them now,” said JJ Lai, chairman of the parade's organizing committee and veteran rights activist.

“Taiwan is still a Chinese society and there is the whole Confucian ideal of passing on your family name through your heirs. So it takes time, but attitudes are changing,” he added.

On the surface, Taiwan’s gay community enjoys some of the most liberal conditions in Asia, and has been at the vanguard of the region’s gay-consciousness movement.

TV programs have openly gay characters and themes and opinion polls show that about 80 percent of the public is accepting of homosexuality, up from about 60 percent a decade ago.

In 2003, Taipei was the first Chinese-speaking city to hold a pride march, when about 1,000 people — most of whom wore masks to protect their identities — marched through the capital to protest a ban on gays in the military.

It worked. Later that year, the military repelled the ban, making it the first Asian country to do so.

Emboldened, former President Chen Shui-bien — who is now jailed on bribery charges — called for a draft bill on same-sex marriages. But many of the island’s conservative lawmakers derided the bill and it has failed to gain any real political traction since.

Today, however, the masks are gone — in more ways than one.

The 30,000 who turned up for last year’s event, ballooned to 50,000 this year. And the masked have been replaced with people wearing Mad Max leather, technicolor Cinderella and French maid outfits.

Elvis Chen, a Christian from the Tong-kwan Lighthouse Presbyterian Church, was more sedate. He just carried a sign. It read: “I’m Christian and gay. God loves me anyway.”

“I grew up a Christian, and when I came out, my family wasn’t supportive at all. But what hurt most was the church. There are only so many times you can get called a sinner. So I bounced around from church to church until I found this one,” said the 25-year-old student from Taipei.

Chen was protesting attacks on the gay community by an umbrella group of Catholic, Methodist and evangelical churches which support the “curing” of gay teenagers.

Operating as an association of concerned parents, the group put political pressure on lawmakers in May of this year to stall a planned Ministry of Education gender and sexuality curriculum for elementary and junior high school students by painting the course as a forerunner to prostitution, homosexuality, promiscuity and pedophilia.

The group has been largely discredited, but it nonetheless made a significant impact.

“They basically try and connect all the radical elements of a subculture into one group and paint us with the same brush,” said Hiro Liu, spokesman for the parade.

“But we have to face the reality that although these groups are extremist in nature, they did highlight hidden fears in parents and conservative Taiwan that exposure to homosexual issues may turn their children gay.”

Analysts say it is these ingrained fears of largely older voters that have stopped either nationalist Kuomintang (KMT) incumbent Ma Ying-jou or his rival, Democratic Progressive Party (DPP) Chairwoman Tsai Ing-wen, from embracing the gay community in a January election that is likely to be decided by a few percentage points.

“Within our community, it is split like the rest of society on who to vote for. The DPP or the KMT? To be honest, both parties don’t do nearly enough,” said Chen.

“The other problem is there are no openly gay lawmakers in Taiwan and we aren’t politically mature enough to team up with other activist groups such as environmental, or women’s and immigrant rights to form an umbrella pressure coalition.”

But while all the talk of immediate political victories was good for some, Choki, who travelled from Kyoto with six friends to join the parade and sample some of Taipei’s famed nightlife, couldn’t care less.

“There is nothing like this in Kyoto or Japan. This is the biggest march I’ve been to in Asia,” the portly 50-something said as he worked out his pectoral muscles with a set of pushups on the side of the road.

“Look around. There are people here from Korea, Hong Kong, Southeast Asia, Europe and the States. This is what it’s all about.”