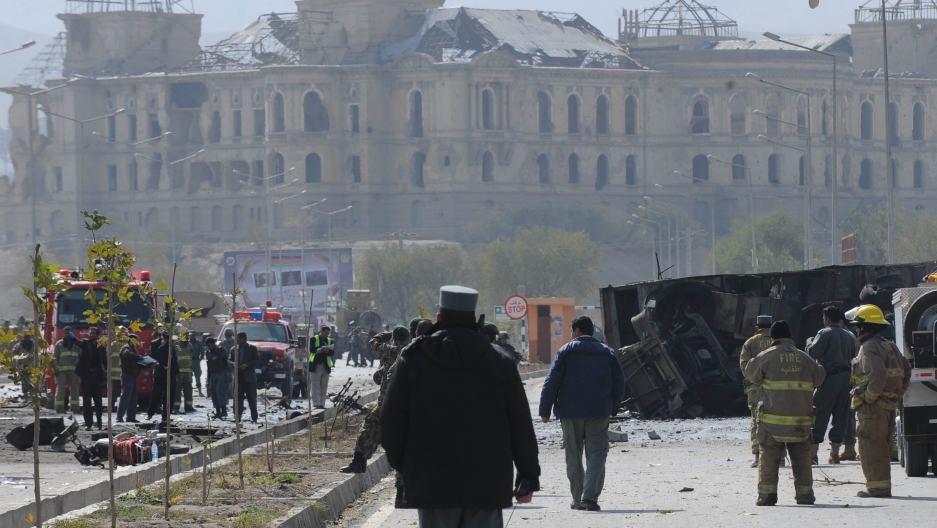 Afghanistan's security force and rescue personnel inspect the site of a suicide attack near the Darul Aman palace (back) in Kabul on October 29, 2011. At least 17 people, including foreign forces, were killed when a Taliban car bomber struck a US-run NATO convoy traveling through the Afghan capital Kabul.
Credit: Massoud Hossaini
Share

BOSTON — When a Taliban suicide bomber rammed a car filled with 1,500 pounds of explosives into a heavily armored NATO bus in Kabul on Saturday, killing 17, he did more than shock an already battered nation.

The attacker, identified by a Taliban spokesman as Abdul Rahman Hazarbos, may have also blown a hole in the narrative of success the Pentagon has been perpetuating for more than a year now.

The attack, which occurred on the western rim of the capital, near Dar ul Aman, the former royal palace, killed eight civilian contractors of the International Security Assistance Force (ISAF), all of them American. Five soldiers — four Americans and one Canadian — also died in the explosion, along with three Afghan schoolchildren and an Afghan police officer.

It was the deadliest attack ever on U.S forces in Kabul, and the largest loss of life for the Americans since the helicopter crash in Wardak in August that killed 30 U.S. troops.

The attack will not diminish the U.S. determination to continue the fight in Afghanistan, said U.S. Ambassador to Kabul, Ryan Crocker, to the New York Times.

“Our deepest sympathies go out to their comrades and families, but it will not deter us from our mission,” he said. “It’s a shock, but we will not let these guys win.”

This is typical of statements coming out of Washington over the past few months. The more the Taliban step up their attacks, the more flowery has grown the rhetoric over U.S. successes, the insurgents’ weakness, and the proximity of victory in the decade-long conflict.

In a “60 Minutes” segment aired just two weeks ago, ISAF commander Genral John Allen was categorical in his response to journalist Scott Pelley’s question: “What is your plan to get us out of here?”

This statement raises eyebrows among Afghanistan specialists, since received wisdom for the past several years has been that a military victory is all but impossible.

Even now, most agree that “winning,” in a war where the parameters of success appear to shift with the political winds, may prove a challenge.

Joshua Foust, a fellow at the American Security project and an expert on security issues in Afghanistan and Central Asia, has recently released a paper called “Measuring Success: Are We Winning?” about the decade-long war in Afghanistan.

In the paper, Foust recaps the dramatic attacks in Kabul over the past year that have turned the Afghan capital into what he calls “the epicenter of violence.”

“This marked shift would seem to indicate the war is being lost,” he writes. “But because the U.S. fails to monitor crucial aspects of the war, there is no reliable way to be certain.”

The U.S. military persists in monitoring discrete, quantitative metrics such as insurgent body counts, numbers of operations conducted, and deadly attacks by insurgents, which fail to give a complete picture of the state of play, he insists.

In fact, adds Foust, officials at the Pentagon and elsewhere may be purposely blurring the lines to produce an overly rosy assessment of progress.

“I think what we are seeing is a deliberate attempt to filter information in a way that will make (the military) look good,” he said.

One example is a recent Pentagon report that claims that violence in Afghanistan is down for the first time in five years. The Wall Street Journal cited the report as evidence that the troop surge and the transition to Afghan security control are finally bearing fruit.

“The findings provide a boost to advocates of the current strategy, which entails clearing areas of insurgent activity and turning them over to Afghan control. Military officials have been anxiously waiting for the troop-intensive counterinsurgency strategy to begin to show results and drive down the number of attacks initiated by militants.”

But the Pentagon report is the result of a shuffling of data that gives a false sense of what is happening, Foust said.

“The Pentagon is counting ‘violence’ differently in October than it did in its April report,” he said. “In April, any IED [Improvised Explosive Device] event was counted — explosions as well as those found and cleared. In October, ‘violence’ included only the explosions … This is a lot of wordplay. They are trying to spin something good out of a bad picture.”

In fact, Foust said, violence is up sharply. The number of “security incidents” has more than doubled in the past two years.

This certainly seems to be the case, judging by Saturday’s news.

The spectacular attack in Kabul all but overshadowed other grim news. In southern Afghanistan, near Kandahar, a man wearing an Afghan National Army uniform turned his gun on ISAF soldiers, killing three and wounding six. This is the latest in a string of such incidents, when men in the uniform of Afghan security forces have killed their ostensible colleagues and partners.

More: The war over future wars

The shooting came a few days after an attack on the Provincial Reconstruction Team in Kandahar. The incident resulted in the death of an Afghan interpreter, and several injuries among troops and contractors. It also served to demonstrate the resolve of the insurgency as U.S. troops prepare to begin withdrawing from the southern city.

To make a bad situation even worse, relations between the Afghan government and its international backers are at an all time low.

Afghan President Hamid Karzai caused anger and consternation with a statement released by the Arg, or Presidential palace, on Saturday.

There was not a word about the 13 ISAF personnel who died along with them.

Karzai did express condolences to Amabassador Crocker and General Allen on Sunday, at a regular meting the National Security Council.

“President Karzai, on behalf of the people of Afghanistan, conveyed to Ambassador Ryan Crocker and General John Allen his deepest condolences,” read a statement issued by the U.S. Embassy on Sunday. “(He) and the Afghan people are grieved by the NATO loss of lives and share the pain and sorrow with the families and friends of the troops killed.’”

But the damage had been done.

Karzai has been something of an enigma of late. Last week he gave an interview on Pakistan’s Geo TV, in which he said that Afghanistan would stand with Pakistan in the event of hostilities between Islamabad and Washington.

The remarks left aides scrambling to limit the damage. Foreign Ministry spokesman Janan Mosazai said that Karzai’s words had been taken out of context; presidential spokesman Siyamak Herawi told the Los Angeles Times that the media had misinterpreted the president’s speech.

But the statement did little to endear the increasingly unpredictable Karzai to an international community that is tiring of a seemingly endless war.

The United States has, to date, spent more than $440 billion on the war in Afghanistan, and  it has lost more than 1,600 troops.

But the United States continues to cast the war in a positive light.

Clinton touted what she calls the “fight, talk, and build,” strategy, which will “squeeze” insurgents to the negotiating table by hammering them militarily while simultaneously making peace overtures.

But according to Foust, this makes little sense.

“The time for ‘fight, talk and build’ was in 2009, when the United States was ramping up its military presence,” he said. “It does not make sense during a withdrawal. The Taliban can absolutely play a waiting game. They would be stupid not to.”

The attempts to portray the military’s new strategy as bearing fruit smack more of “magical thinking” than of any connection to reality, he added.