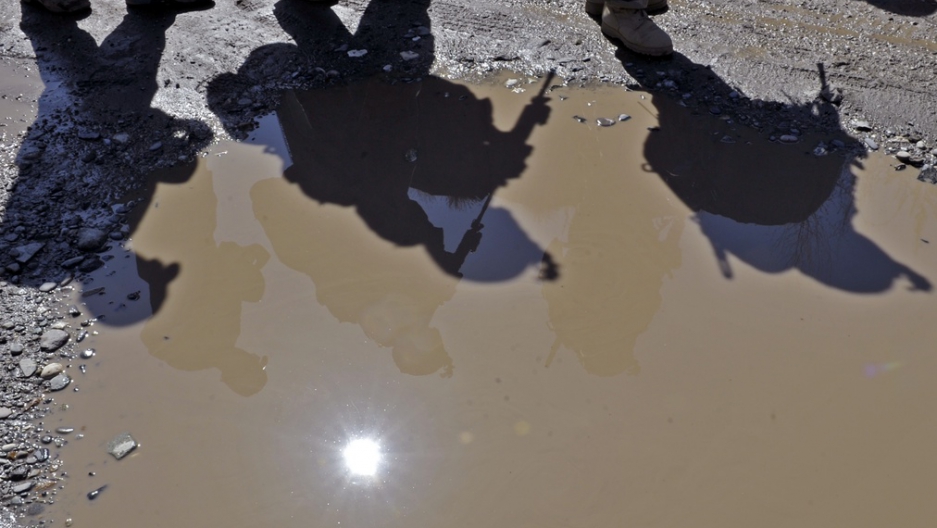 NEW YORK — With potential U.S. budget cuts on the horizon, the U.S. military's top brass are scrambling to keep their funds intact.

A "super-committee" of Republicans and Democrats has been engaging in high-stakes horse-trading to little succes in recent days, trying to hammer out a deal that will cut $1.2 trillion from government spending over the next decade.

If they can't reach a consensus, automatic cuts will go into effect across the board. The Pentagon, flush from a decade of having its cake and eating it too, has grown into the biggest target of them all.

The bilateral committee — officially the Joint Select Committee on Deficit Reduction — emerged from the summer's fiasco of failed debt-ceiling talks and the downgrade of America’s sovereign credit rating by Standard & Poor’s that followed.

To date, with the panel’s deadline for agreement looming on Nov. 23, few signs have emerged of a sudden appetite for compromise.

Read more: What a difference an occupation makes

An analysis by the Center for Strategic and Budgetary Assessments, a think tank, indicates that the automatic cuts would slice the U.S. defense spending pie — not including the diminishing but still large costs of the Afghan and Iraq wars — to its 2007 level, and keep it there for about a decade.

U.S. spending defense has grown enormously in the decade since 9/11 — by 86 percent, according to DOD figures. Even at the 2007 level, annual Pentagon budgets would still be larger than the combined military budgets of the next seven-largest nations ranked by defense spending, and 50 percent higher than the last budget signed by President Bill Clinton in 2000.

But cuts will mean changes. Since the largest single line item in the defense budget is personnel, cutting $350 to $450 billion over the next 10 years will force hard decisions on the size of various services and the weapons they employ.

Dan Goure, a military analyst at the Lexington Institute, says these cuts will force individual services to try to grab resources from each other, while dumping roles and missions they don’t want.

“What we could see is the biggest military food-fight in at least a generation,” Goure said. “The outcome of this fight could profoundly recast the traditional equal division of defense resources among the Army, Navy, Marines and Air Force.”

As they peer over their battlements, each of the military’s service commanders see the world a little differently. Not surprisingly, each tends to argue that the real savings are best sought in some other branch. Their positions:

Of the major services, the Army appears to understand it is most vulnerable. Even before 9/11, its heavy tank brigades — a legacy of the Cold War — had fallen out of favor as too hard to move and too expensive to maintain.

Then came the long, difficult wars in Afghanistan and Iraq, where the ultimate outcomes remain very much in question. These wars relied on major ground-force deployments that have cost trillions of dollars, led to thousands of American deaths and consumed valuable political capital for two administrations.

Within the Army, and inside the civilian leadership of the Defense Department, a higher-level debate over the shape of future threats also rages, with Army and Marine Corps stressing that large, ready-to-deploy ground forces will continue to be the backbone of American power, while the Navy and Air Force stress high-tech, “stand-off” capabilities like drones and missiles that risk fewer American lives (and require fewer troops — and thus lower health care, pension and housing costs).

This has the army’s partisans spooked.

Gen. Peter Chiarelli, the army’s vice chief of staff, told a House defense panel hearing this week that while the army is prepared for budget and manpower cuts, historically such decisions had gone too far and “hollowed out the force.”

“I lived through an Army that came out of Vietnam … and for 10 to 12 years, we had to rebuild that Army,” he said. “These questions, these decisions have been made before, and there's just a tendency to believe at the end of a war that we’ll never need ground forces again. Well, I tell you that we’ve never got that right. We have always required them. We just don't have the imagination to always be able to predict exactly when that will be.”

As the debate unfolds, the Navy and Air Force feel they have the upper hand. During the past decade, their capabilities — geared largely toward major, conventional wars before 9/11 — seemed out of step with the mission. At the height of the Iraq insurgency in 2005, Navy sailors were even pulled from their ships and trained for ground combat.

Now, however, as the two wars of 9/11 wind down, a more global, strategic line of thinking is back in vogue. China’s rise certainly is part of the picture — and Defense Secretary Leon Panetta’s trip in Asia last week repeatedly stressed that the Navy’s huge Seventh Fleet would not only stay in the region, but actually grow.

“We are a Pacific nation. We will not only remain a Pacific power, but we will strengthen our presence in this area,” he told sailors Wednesday aboard the USS Blue Ridge, Seventh Fleet command ship.

Those are the kind of words that can make the saltiest admiral smile.