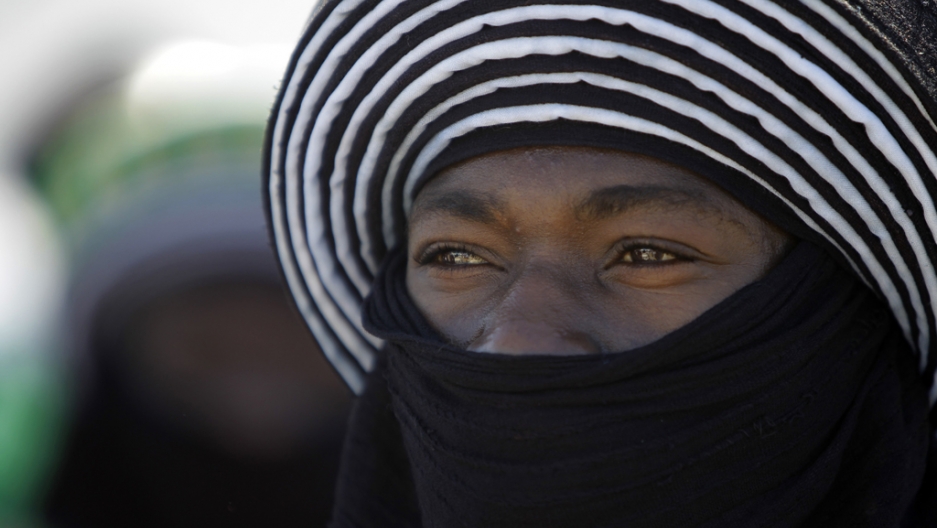 A Tuareg tribesman is photographed here during a welcome ceremony for the African Union delegation at the airport in Tripoli, Libya, on April 10, 2011.
Credit: Joseph Eid
Share

The Tuareg people are about 2 million nomadic people who live across the Sahara Desert, including in the North African countries of Mali, Niger, Libya, Algeria and Chad. The Tuaregs are part of the Berber group of people, and they are largely Muslim. Much of Tuareg art is in the form of jewelry, leather and metal saddle decorations, and finely crafted swords.

The Tuareg population spreads across the borders of several countries, but the largest concentration is in Mali, with an estimated 950,000.

The Tuaregs are kind of like the Kurds of the Middle East. They're a substantial ethnic population that crosses the boundaries of several countries, but have no majority in any one country. As a result, many Tuaregs are pressing for better representation or for their own territory.

Muammar Gaddafi recognized the Tuaregs as determined and resourceful fighters. He promoted thousands of them in the Libyan army and encouraged them to be loyal to him. Now that Gaddafi is dead, his son Saif has sought refuge with a band of Tuaregs that are escorting him across the Saharan Desert between Niger and Mali.

3) What are they doing in Mali?

Ethnic Tuareg soldiers who had been fighting for Gaddafi have fled Libya and have gone to Mali, where they helped to form a new rebel group, the National Movement for the Liberation of the Azawad (NMLA), which advocates for independence for Mali's northern desert region.

The Tuaregs have been long-time opponents of Mali President Amadou Toumani Toure’s government, complaining that the central government located in the southern capital city of Bamako has ignored the Tuareg in the country’s impoverished north. The Tuaregs are rebelling against the Toure government, which has been in power since 1991. The new rebel group could become a significant challenge to Toure.

Toure has sent Interior Minister General Kafougouna Kona to the desert region to try to prevent a renewed fight. Kona is trusted by the Tuareg people and has experience negotiating peace with rebel Tuaregs.

4) How do they survive in the Sahara Desert?

For thousands of years, the Tuareg economy revolved around trans-Saharan trade. There are basically five trade routes that extend across the Sahara from the northern Mediterranean coast to the African cities on the southern edge of the desert. Tuareg merchants were responsible for bringing goods from these cities to the north. From there, they were distributed throughout the world. Because of the nature of transport and the limited space available in caravans, Tuareg usually traded in luxury items, which took up little space and on which a large profit could be made. Tuareg were also responsible for bringing enslaved people north from West Africa to be sold to Europeans and Middle Easterners. Many Tuareg settled into the communities with which they traded, serving as local merchants and representatives for their nomadic relations.

Most Tuaregs practice Islam, and they have developed their own distinctive brand of the religion. Tuareg belong to the Maliki sect of Islam, resulting from the teachings of the great prophet, El Maghili, who came among them in the early 16th century.

Many make daily prayers to Allah, but strict adherence to other religious requirements is rare. Most of the feasts are observed and celebrated with relish, but the fasting that is required during Ramadan is often excused because Tuareg travel so much. Like most followers of Islam in northern Africa, Tuareg believe in the continuous presence of various spirits (djinns). Most Tuareg men wear protective amulets that contain verses from the Koran.

Tuareg men begin wearing a veil at age 25, which conceals their entire face excluding their eyes. This veil is never removed, even in front of family members. It is believed that men began wearing the veil to protect their faces from the Sahara sands.

Tuareg women are not veiled.