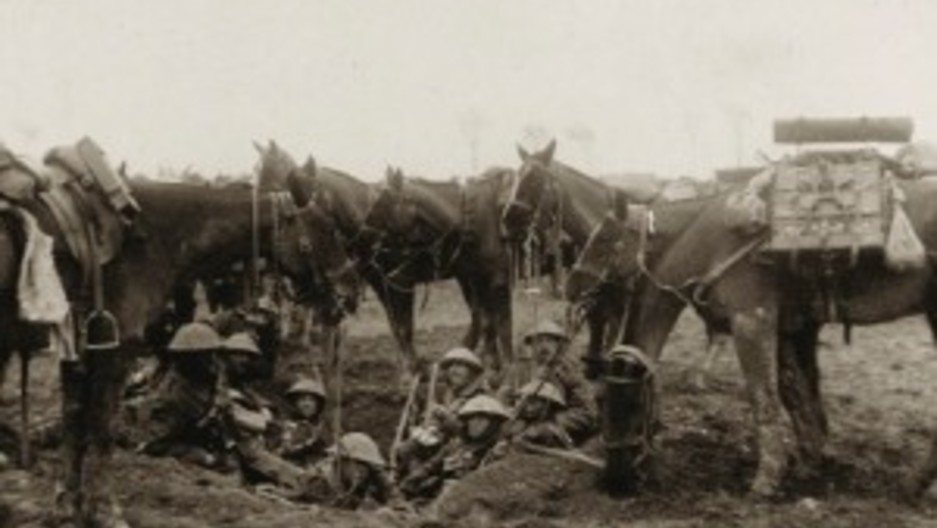 Cavalrymen rest in a crater left from an artillery shell, circa 1916 or 1917 along the western front during World War I. Standing nearby are their horses.. (Photo is copyright National Army Museum.)

Some call them the forgotten heroes of war, but a new exhibit in London seeks to pay tribute to the millions of horses who died serving in battles over the centuries.

Within seconds of stepping into the War Horse exhibit at London’s National Army museum, visitors are transported to the lush green fields of Devon.

The pastoral scene is also featured in the children’s novel and play that inspired the exhibit. “War Horse,” written by Michael Morpurgo, opens when a horse appropriated from a Devon farm is shipped off to the front.

Morpurgo said it all began when he met a WWI veteran of a cavalry regiment in his local pub. Morpurgo asked him what he did during the war.

“And then he said something wonderful. He said ‘I was there with ‘orses.’ And he said it like that 'with ‘orses.' And then he just started talking,” said Morpurgo.

The new exhibit traces the use of horses in war down the centuries through WWI. Curator Pip Dodd said they were critical and not just for charging into battle.

“The horse really was the motorized vehicle — the helicopter and the transport ship and plane of its day. They were hugely important,” said Dodd.

There are also reminders of the grueling, often deadly conditions the animals endured even before they reached the battlefield.

One room recreates a ship’s hold, complete with creaking boards. Dodd said the demand for horses in WWI was enormous.

“In the first 12 days the British army bought up about 120,000 British horses from farms and from bus companies, but there weren’t enough or good enough to be army horses so they had to look further afield, “ he said.

They looked to the United States.

More than 300,000 horses and mules were sent over on transport ships, many dying en route. Those that made it were then shipped out and into battle.

The video opening the exhibit recreates moments of horror and violence.

Morpurgo heard about it firsthand from the veteran he met, but what really touched him was the former soldier’s intense bond with the horse who carried him to the front lines when Morpurgo was 17 years old.

The author’s book and play, like the exhibit, focus on the warriors who never chose to go into battle and never knew what was was coming.

Of the 1.2 million horses used by the British Army, nearly half died. For Morpurgo, it is a vivid reminder of the cost of war.

“Roughly the same number of men and horses died in the First World War. So they did this thing together. It was extraordinary courage, loyalty, horror all together. But they didn’t do it apart. They were supporting each other,” he said.

Curator Pip Dodd admitted to being moved by what he discovered during his research.

“Of course the vast majority of horses that served are now completely unknown and unknowable and anonymous and there were millions of them and so somehow we wanted to pay our respects really so we came up with the idea of this mirror box,” he said.

The box, surrounded by mirrors, is filled with dozens of cutout horses. The mirrors reflect off each other, multiplying the number into infinity.

Of all the horses used in war, only a handful returned to Britain. The rest were sold overseas as riding horses, work horses or for their meat. Morpurgo said that's almost unforgivable.

For him, the horses of war are heroes just as much as the soldiers who relied on them.

Steven Spielberg plans to release a film version of War Horse in December.