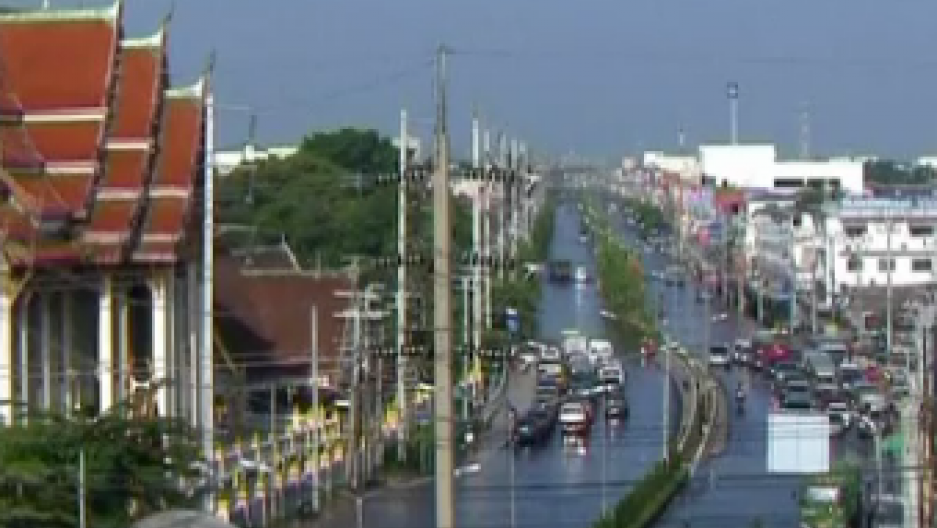 Water is covering the streets of Bangkok as floodwaters pour into the populous capital city.

Story from Here and Now. Listen to the above audio for a complete report.

Thailand continues to battle floodwaters, but they've moved from the more rural, agricultural districts of the north to the heavily populated capital city of Bangkok.

Despite promises to the contrary, Thai officials now say they're unable to guarantee any part of Bangkok will stay dry, said Rachel Harvey, BBC reporter  in Bangkok.

"The government has aksed those who can afford to leave and have somewhere they can go, to do so to make the authorities job a little easier," Harvey said.

Central Thailand, north of the capital, has been battling rising waters for months, but now, in order to relieve pressure on badly swollen rivers in that area, some water had to be let toward the capital. Though dykes and diversions have been strengthened, the water is now coming with such force that it's possible that catastrophe could strike the heart of Bangkok.

"Authorities are saying the worst case scenario is the flood barriers would breach in multiple places all at once and a gush of water would come into central Bangkok," Harvey said. "That could leave parts of the capital under a meter to 1.5 meters of water for more than a month."

Even the "best case scenario" is bad news for some: extensive flooding of the suburbs, around the main city of Bangkok. Particularly in suburbs to the north, that flooding is already under way.

Harvey said the bad situation has been made somewhat worse because of conflicting information coming from government officials. Sometimes, the same person will make conflicting statements on the same day, eve.

"There is definitely a fair criticism that the information, the messages have not been as clear or consistant as they could have been."