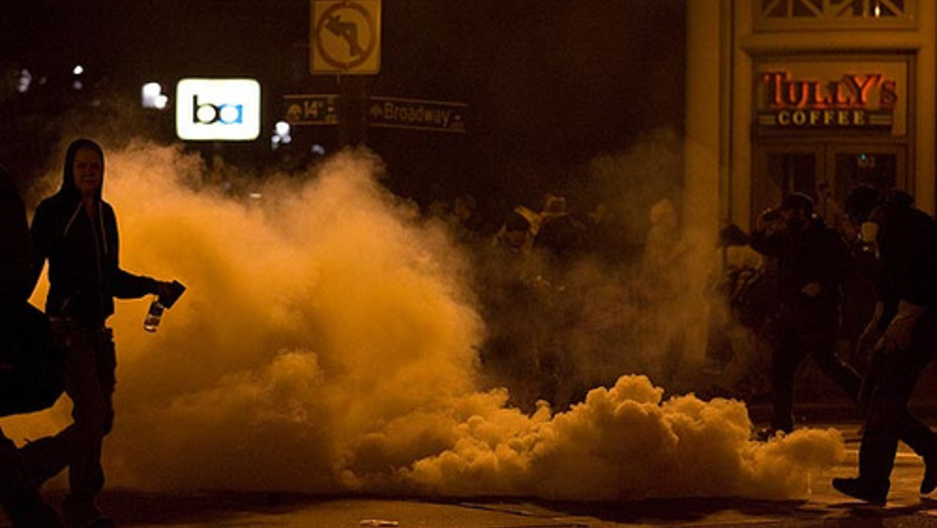 Tear gas being used on protesters in Oakland.

A day after a clash in Oakland between Occupy Oakland protesters and police, which sent an Iraq War veteran to the hospital in a coma, other protesters around the country had their own run-ins with law enforcement.

In San Francisco, police seemed to be gearing up for arrests and conflict, only to suddenly withdraw without any explanation, the San Francisco Chronicle reported. According to the New York Times, mass arrests were also made in Atlanta and Chicago, while city leaders in New York, Boston and New York have tried to avoid that scenario thus far.

Ali Winston, criminal justice reporter for KALW Radio in San Francisco, said Oakland Mayor Jean Quan has pledged no more direct conflicts with protesters, at least for a couple days, while city officials try to work with protesters to reach an amicable compromise.

"I can't say for sure whether Mayor Kwan will allow this to continue in the current form, but right now she's backpedaling quite a bit because her base...condemned her very strongly for the destruction of the Occupy Oakland camp and the police response (Tuesday) night," Winston said.

Winston, who was at the protests Tuesday night, said he never saw the sort of violent attack from protesters that police said prompted them to lob tear gas cannisters and other less-then-lethal projectiles at the demonstrations.

This isn't the first time Oakland has seen mass protests, Winston said, and that history of confrontation between law enforcement and demonstrators may have contributed to the violent confrontation Tuesday night.

"In both instances, the demonstrations that took place, which were by and large peaceful, except for some vandalism, were met by hundreds of police officers in riot gear called in from all over the region, just like we saw (Tuesday) night."