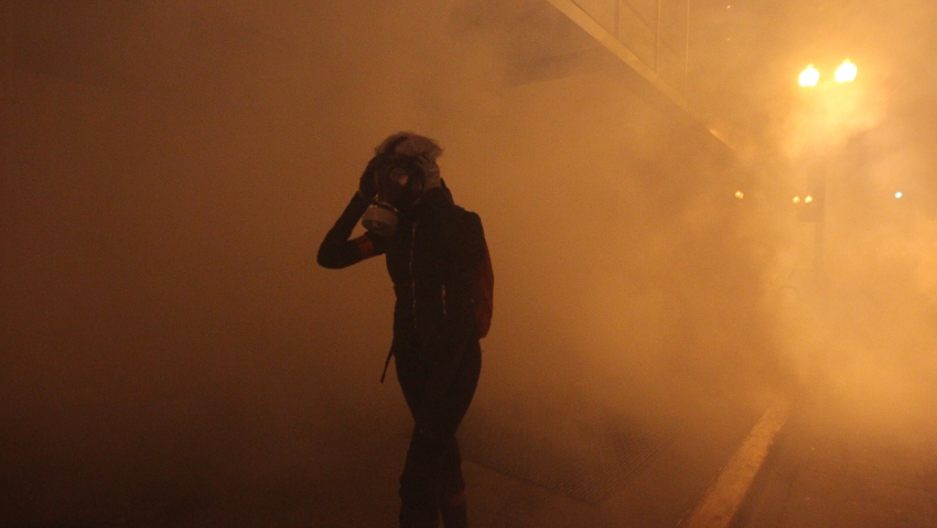 OAKLAND, Calif. — Anti-Wall Street demonstrators in Oakland broke into a city plaza on Wednesday that police had evicted them from a day earlier, but the mood remained largely calm.

The "Occupy Oakland" movement is one of the latest in a string of protests that have sprung up in cities worldwide. Protesters say they are angered by “corporate greed” and rampant unemployment, among other societal issues.

That message hits home in Oakland, a city plagued by poverty and a soaring murder rate. The East Bay city had the third-highest crime rate in the nation in 2010, according to CQ Press, which compiles yearly crime ratings based on FBI data.

But as movements gather steam across the nation, and in other countries, one of the key questions is how protesters will harness the populist anger they've stirred up as the Occupy movement continues.

On Wednesday, the crowd of several thousand spent the better part of the evening holding a “general assembly” to discuss the movement’s next steps. The verdict: a citywide strike next week.

It would be one of the first efforts to move the Occupy movement beyond encampments in city spaces.

In one of the tensest moments on Wednesday, a small group of agitated protesters seemed to play tug-of-war with the chain-link fence surrounding the trampled grass, as a larger group tried to keep the fence in place.

The barrier was erected after the pre-dawn raid Tuesday on a protest encampment that had settled in about two weeks prior. Ultimately, the persistent minority managed to bring down the fence, although it appeared few were interested in actually reoccupying that area.

Minutes after the fence came down, sections of chain-link were stacked in neat piles. A young girl bounced up and down on one like a trampoline.

Later, some protesters scuffled with transit police as they closed a subway entrance near the downtown plaza shortly after 10 p.m.

Protesters were streaming into the underground station to travel across the bay to a similar protest in San Francisco. As the crowd flooded in, following several young men wheeling a sound system blaring Rihanna songs, police lowered the metal gate at the subway entrance, witnesses said. Some protesters were left inside and others shut out.

Davi Barker, 30 and Faeza Moghul, 30, who were both inside the station at the time, said protesters angrily began calling transit police “pigs.”

As the group retreated back up the stairs, Barker and Moghul said, police detained two men who had been trying to force the metal gates open. “We were all leaving,” Moghul said. “As soon as we turned around (to go), they grabbed them.”

BART police on the scene would not comment on whether any arrests were made.

The protesters marched, seemingly aimlessly, through the streets after being locked out of the subway stations. At one point, they paused outside the local jail to chant "Free them all!" — a reference to the roughly 100 arrested during Tuesday's raid.

Protesters frequently called on each other to remain peaceful and tried to discourage a raucous minority from antagonizing police.

When a small group peeled off from the main march to approach several layers of riot police, others yelled at them to rejoin the group. “Don’t do anything!” called out Cynthia Johnson, a 66-year-old woman in a pink knit hat and bright blue jacket.

Earlier in the evening, another tense moment occurred when Dan Siegel, a legal adviser to Oakland Mayor Jean Quan, was greeted by an angry crowd demanding an explanation for the level of force exercised by police on Tuesday.

One man lifted his shirt to reveal a grapefruit-sized bruise he said he received as he helped carry wounded Marine veteran Scott Olsen to safety during Tuesday’s clashes. A hospital spokesman confirmed Wednesday that Olsen had been admitted and was in critical condition.

Siegal said that he sympathized with the protesters and had advised the mayor not to authorize a raid on the camp. "Sometimes she listens to me, sometimes she doesn't," he said, adding that he had been tear-gassed himself as he joined protesters Tuesday night.

Across the bay, large crowds at Occupy San Francisco prepared for a police raid after midnight by trading tear-gas tips and lining up into rows. In a somewhat surreal scene, local politicians in business suits mingled with 20-something men with bandanas covering their faces.

Police have warned the San Francisco occupiers, who have constructed a makeshift tent city in a major city plaza, to leave the site. But as of 2 a.m. Thursday, the camp was still going strong, with few police in sight.

Oakland protesters say they will reconvene Thursday at 6 p.m.