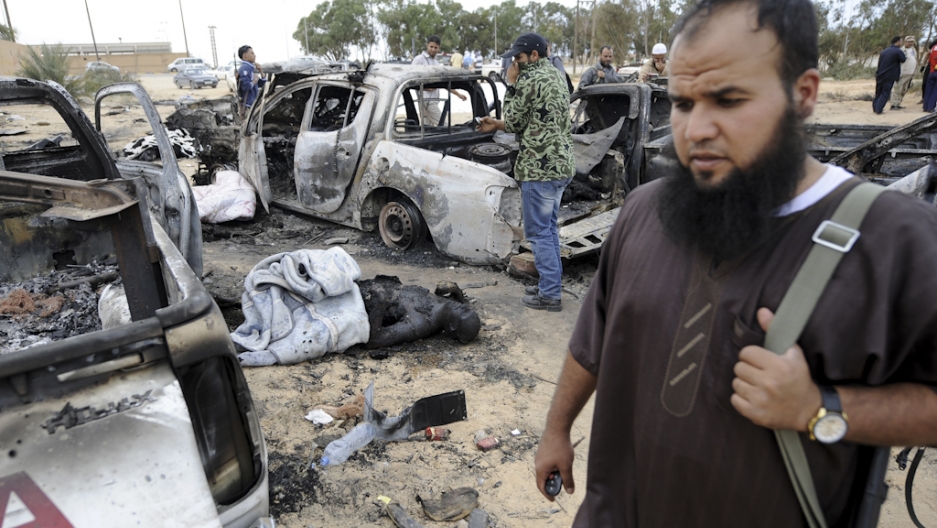 Libyan National Transitional Council (NTC) fighters walk past a charred corpse at the site where a convoy of loyalist forces is believed to have been bombed by NATO before the killing of Muammar Gaddafi in Sirte on October 22, 2011.
Credit: PHILIPPE DESMAZES
Share

Afrikaans-language newspaper Rapport said South African and Libyan officials were investigating reports that at least 19 mercenaries, and as many as 50, had been contracted to provide an armed escort for Gaddafi, in an operation that one alleged mercenary described as a "huge failure."

The plan was to transport Gaddafi to Niger, according to Rapport. But NATO launched air strikes on the convoy as it left Sirte, followed by attacks on the ground by National Transitional Council fighters. Gaddafi fled to the water drain were he was soon found.

The team of South Africans is reported to have scattered in the chaos, and some are said to have been injured.

Beeld, another Afrikaans newspaper in South Africa, reported Wednesday that the mercenaries would not receive any help from the South African government in returning home from Libya.

"Any South African who is involved in military matters in Libya would do so illegally and at own risk. They are their own responsibility," Siphiwe Dlamini, a defense department spokesman, told Beeld.

"According to the Prohibition of Mercenary Activity Act of 2006, South Africans are forbidden from entering any conflict area in any part of the world on either side," Dlamini said.

According to Beeld, the men were left "stranded" in Libya, and "desperate attempts were made over the weekend to find a pilot prepared to fetch the men."