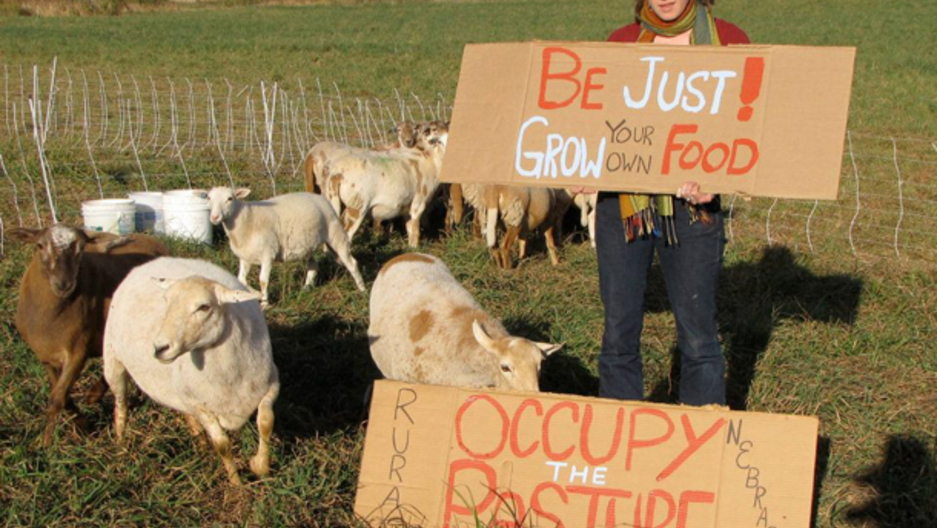 Specifically, she lives in Lyons, Neb., population 851. It's probably the last place you'd expect to find Occupy Wall Street protesters, 1,285 miles from that protest's namesake in New York City. But Larsen is having a protest of her own.

She calls it Occupy the Pasture.

"We occupied our pasture because most of the occupy protests are happening in cities, but I live in a rural area," she said. "I wanted to feel connected to this larger political movement that I agree with very strongly."

Larsen, who raises sheeps, has painted signs and trying to remind folks in rural America that rural areas have historically been a source of great social good, she said.

In college, Larsen decided the current economic system was unjustm and the best way for her to challenge it was to grow her own food. She says this allows her to keep the primary source of her sustenance, out of the hands of corporate America.

"I think the message of Occupy the Pasture is do what can to grow your own food," she said. "And what you can’t grow yourself, support the locally owned businesses that can do it for you."

Larsen wants people to look at how they could incorporate that theme into their own lives. She'd like to see more garden plots and herb pots take root around America.

Larsen just took to the fields a few days ago, but through the power of Facebook, she's gotten national recognition.