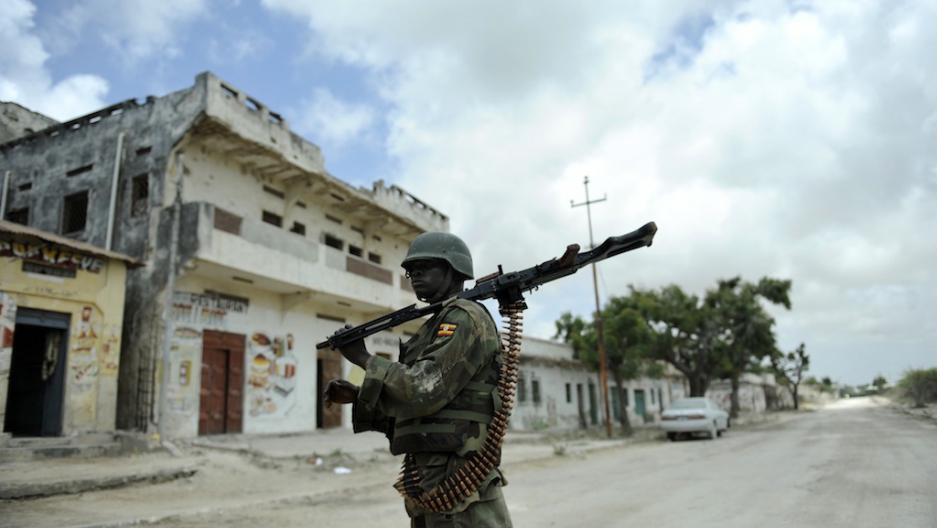 The threat from groups linked to Al Qaeda in Africa and the Middle East is growing. In this picture taken on Oct. 5, 2011, an officer of the African Union's peacekeeping force in Somalia mans a frontline position near the Mogadishu stadium, captured from Al Shabaab hardline extremists.
Credit: Tony Karumba
Share

BOSTON — Al Qaeda has been hit hard by high-level assassinations and constant drone strikes, but the next big threat to international security may come from subsidiary Islamic extremist groups in Africa and the Middle East, according to two New York Times correspondents.

“As Al Qaeda is wounded, the affiliates become the leaders,” said Pentagon correspondent Thom Shanker during a book seminar at the Harvard Kennedy School’s Shorenstein Center. “There’s a worrying trend of networking in Al Qaeda.”

The core of Al Qaeda has been eroded since the Sept. 11 attacks, said Shanker and terrorism reporter Eric Schmitt, co-authors of the book “Counterstrike: The Untold Story of America’s Secret Campaign Against Al Qaeda.”

Better intelligence and a more nuanced understanding of the terrorist groups have resulted in the successful U.S. military mission to kill Osama bin Laden and an influx of drone strikes targeted at senior leaders — incidents that could not have happened 10 years ago, they said.

But the threat is now shifting from the central command to Al Qaeda affiliates elsewhere in the world who are not under the U.S.’s magnifying glass.

While the Al Qaeda branch is Yemen is considered the most dangerous threat to the U.S. — the “underwear bomber” and the cargo-plane bomb attempt both originated in Yemen — militant groups in North and East Africa also have the U.S. “rife with concern,” said Schmitt.

Boko Haram in Nigeria, Al Shabaab in Somalia and Al Qaeda in the Islamic Maghreb in North Africa have all become more sophisticated and more capable of attacks that move beyond the local arena and have international reverberations.

But the allied extremist groups in Africa differ from Al Qaeda in the kind of attacks they pursue, Schmitt said.

One of Al Qaeda's main pursuits continues to be obtaining weapons of mass destruction for major attacks.  The militants in Somalia and Nigeria focus on smaller, less expensive blasts directed toward both Westerners and citizens of their home country.

Nigeria’s radical Islamist group Boko Haram escalated its violence when it attacked the U.N. headquarters in Nigeria’s capital, Abuja, in August. At least 18 people were killed and dozens more injured in the suicide car bombing outside the heavily guarded building where international officials worked.

In Somalia, another group allied to Al Qaeda, Al Shabaab, has wreaked havoc in a country that hasn’t seen an effective central government in two decades.

The African Union has sent 9,000 troops, mostly Ugandans, to support the transitional government in Mogadishu against Al Shabaab. This month Kenya has sent troops into Somalia, too, in pursuit of the kidnappers of four foreigners from Kenya. The Kenyan authorities blame Al Shabaab.

The militant group denies the kidnappings and has threatened Kenya with a campaign of violent terror in retaliation for sending its troops into Somalia.

“Your attack to us means your skyscrapers will be destroyed, your tourism will disappear,” a spokesperson for Al Shabaab warned Kenya.

France announced Monday that it would help support Kenyan troops in their offensive by sending supplies to the region, and the U.S. has planted new drone bases in the Seychelles and Ethiopia.  Those bases will be used to attack the group in Somalia, according to anonymous U.S. officials and leaked diplomatic cables.

“Somalia has plenty of ungoverned space right now,” Schmitt said, adding that some are worried of a possible teaming up between Al Shabaab and Al Qaeda for joint operations.

But don’t expect U.S. boots on the ground in Somalia any time soon, Shanker said.

It isn’t out of the realm of possibility for the U.S. to send military advisers to Somalia, much like President Barack Obama’s recent move to send troops to Uganda to combat the Lord’s Resistance Army, he said. But he added that anything more than working in an advising role would not be politically possible in the U.S.

But U.S. policy toward militant groups like Al Shabaab is divided and complicated, according to Shanker and Schmitt. Some U.S. officials believe targeting militia leaders in Somalia “does more harm than good,” and others worry that going after Shabaab may radicalize the Somali population in the U.S.

A group like Al Shabaab attacking the U.S. from within is a real threat because of their "safe haven" in cyberspace, where recruiters have the chance to inspire a network of homegrown terrorists, Schmitt said.  Already some young Somalis who are U.S. citizens have returned to Somalia to join Al Shabaab.

Shanker and Schmitt also warned the U.S. to be ready for another attack on its soil.

"There will be another attack here in the United States," Schmitt said.  The rise of militant groups in Africa and their move to fill the power void left by Al Qaeda has made the possibility very probable, according to the pair of reporters.

But they said they can't predict when the attack will occur or whether it will originate from a militant group like Al Shabaab or from a radicalized community within the U.S.

The current goal, instead, is to “drive [terrorism] down to a more manageable level,” or to the criminal level, Shanker said. In his view the best choice the U.S. can make in combatting terrorism is "by beating away at the ferocity and frequency of attacks" because it will probably never go away completely.

"The good news is that organization is very much on its heels," Schmitt said, referring to Al Qaeda's ability to coordinate attacks.  He said that the U.S. intelligence community has developed into a group adept at deterring potential terrorist attacks.

But Shanker added, "Other affiliates and networks have come up with brilliant ideas."