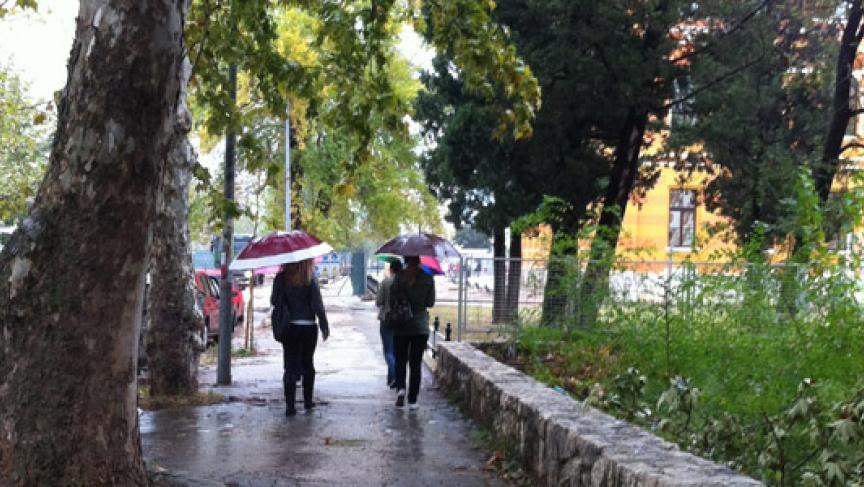 Students walk back to the building that houses United World College in Mostar. In the same place, students in a public high school attend separate classes for Croat and Bosniak students. (Photo: Nate Tabak)

Share
Studying abroad seems to be par for the course when you're a member of the North Korean leader's family. Two of Kim Jong Il's sons went to Switzerland for boarding school and his daughter studied in Paris. One of Kim Jong Il's grandsons has just started boarding school in Europe. But the 16-year-old Kim Han Sol is foregoing France and Switzerland. He's studying in the Bosnian city of Mostar, a city with its own recent history of division and strife. Ever since his arrival earlier this month, Kim Han Sol has attracted hordes of reporters. I caught up with him near the campus of United World College, where he's entered junior year. Kim was dressed like many teenagers, with a touch of a hipster, sporting thick-rimmed glasses, a stylish haircut and earrings. He wouldn't let me record our conversation, but he did answer a few questions. He told me being Kim Jong Il's grandson comes with a lot of baggage. "It's guilt by association," he said in perfect, unaccented English. "All I want to do is study and live my life." That's not so easy when your father is the Dear Leader's oldest son, Kim Jong Nam. The son fell out of favor in 2001, after he was caught trying to sneak into Japan with a fake passport to visit Disneyland. The grandson, Kim Han Sol, has attracted some attention of his own. The South Korean media have been pouring through his social media profiles. On his Facebook page, they found that he responded to a poll, saying he preferred democracy over communism. Kim Han Sol told me people shouldn't read too much into that. "It was silly poll," he said. "In communism and democracy, you have both good and bad." That's not what you'd expect from the grandson of the North Korean dictator. But Kim Han Sol says he hasn't lived in North Korea since he was two-years-old, though he visits every summer. Most recently, he lived with his father in Macau, where he attended another international school. "I know almost nothing about North Korea. Most of what I know is from you guys," he said, referring to the media. When Stephen Codrington interviewed Kim Han Sol for his school application, he said he saw something special in him. "He is his own person, and that was very clear during the interview. He's an individual in his own right," said Codrington, who's the former head of United World College in Hong Kong. Kim Han Sol was originally accepted to attend his last two years of high school there, but Hong Kong authorities wouldn't give him a visa. So he went to the Bosnia campus instead. Codrington said he thinks that Kim should find Mostar extremely interesting given its history – it was devastated by the Bosnian civil war in the 1990s. "I think it's a good school for Kim because I think it will give him insight into other conflicts — the ways in which they're being handled or mishandled, as the case may be," Codrington said. "I think it will broaden his perspective of something that I know matters a lot to him, and that is the division on the Korean Peninsula." A broader perspective is something on display in Dzenan Hakalovic's history class at United World College. The Bosnian teacher leads a discussion about Bismarck — the man who unified Germany — in a class with students from Bosnia, Britain, Turkey and Afghanistan. Later in the year, the class tackles the issue of the Balkan wars. In fact, part of United World College's mission in Mostar is to foster reconciliation in ethnically divided Bosnia. After class at a nearby café, Dzenan Hakalovic, told me the school's melting pot can be a transformative experience. "We have students coming from the Middle East, Afghanistan, and Israel-Palestine. We have students from former Communist states, from the Balkans, and students from western Europe and the United States, all sitting together in a classroom. That makes it much easier to talk about different perspectives," Hakalovic said. According to Kim Han Sol, that's exactly what drew him to the school – many different view points that he hopes will give him a better understanding of the world. He'll also get the opportunity to see first-hand how Mostar is dealing with its own reconciliation. His new school is situated at what was basically a front line between Croat and Bosniak forces. Mostar Mayor Ljubo Beslic, a Croat, said while the legacy of conflict remains there, ethnic divisions are easing up. Mostar, he said, is a good example for others to follow. Then the mayor added that he thinks Kim Han Sol, in particular, can learn a lot from being here.