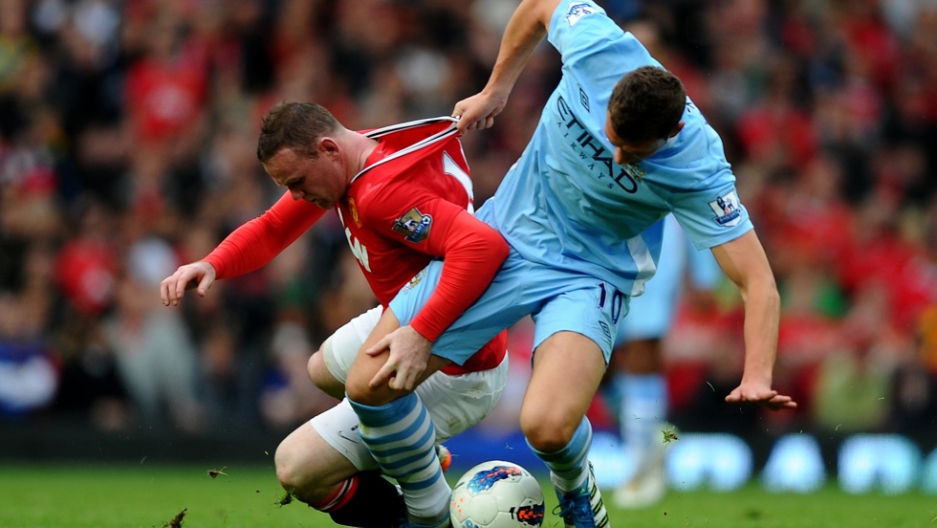 Edin Dzeko of Manchester City tangles with Wayne Rooney of Manchester United during the Barclays Premier League match at Old Trafford on October 23, 2011 in Manchester, England. Did a billionaire's cash lead to the 6 to 1 trouncing?
Credit: Laurence Griffiths
Share

LONDON — A giant event shook English soccer's Premier League on Sunday. And since the Premier League is the most watched football league in the world, by extension world soccer was also turned upside down.

Manchester City traveled 4 miles across town to Old Trafford, home of Manchester United and gave them an historic beat down. The final score was 6 to 1. It's been 85 years since City has beaten United on their home turf by that large a margin.

If United fans are walking around feeling concussed, others are feeling gloomy because the City victory confirms what has happened to what was once considered "the people's game." The motto of England's Premier league is, "Money Talks/BS Walks."

For decades Manchester City had been United's poor relation in this football crazy northern city. Man U has won the Premiership four times in the last five years. The last time City finished in first place was more than 40 years ago. But things began to change quickly three years ago the team was purchased by Sheikh Mansour, a scion of Abu Dhabi's ruling family.

With the Sheikh's billions at its disposal, City has gone from local joke to first place in the Premiership. The season has a long way to run but after Sunday's win it is clear that City will be near the top the whole way.

Why Sheikh Mansour wanted to buy a team with such a long history of mediocrity is an interesting question. It is part of a wider trend of Gulf Arab states getting involved in world football, according to Simon Chadwick, Professor of Sport Business Strategy at Coventry University.

"The Gulf Arabs are huge fans, first and foremost," Chadwick explains. "Next, the Gulf states' ruling families are looking to buy trophy assets. So it's not just Manchester City but they have stakes in French team Paris St. Germain and the Spanish league's Malaga."

But, Chadwick says, it goes deeper. There is a deliberate strategy to use the world's most popular sport to increase the Gulf's geo-political influence. "Take Qatar," which successfully bid for 2022 World Cup, "The bidding process, the constant contact with international boards, are all ways to increase their global influence."

Another interesting question: why English football? Why not German or Spanish? After all, the last time England won the World Cup was before Manchester City finished in first place. With the notable exception of Manchester United and Liverpool, English clubs have not had any great success in international competitions in the last decade.

The reason is business. "Foreigners want to buy into English soccer because it is undervalued," says Mike Carlson, a former American sports television executive who has lived in England for more than 30 years. "Potential owners have a captive market with English fans because fans have a tribal loyalty to their clubs. That is a very important distinction. In America, fans support teams or franchises. In Britain they're clubs."

A club is something you join and feel you own. Carlson adds, "If you can identify a team and spend enough money to get them into the premiership and then get them into the European Champions' League you can make even more money."

But there is another reason why half the Premier League's teams are foreign owned, according to Professor Chadwick. The owners grew up watching English soccer because the English Football Association, the game's governing body, had a far sighted business plan.

"The FA was selling TV rights overseas going back to the '60's," says Chadwick. "Second, the FA was quick to see the opportunity in the Far East and organized tour games, merchandising and extending the brand exercises to Hong Kong, Taiwan and Japan."

Third point according to Chadwick is foreigners find Britain a congenial place to do business.

Soccer exemplifies what Brits call the "Wimbledon-ization" of British business. Wimbledon is the world's most famous tennis tournament but no British man has won in almost 80 years. So what, the natives always applaud the foreigners who win. The City of London claims to be the world's financial center, but most of the companies trading there are not British owned. So what, the Brits say, they bring wealth to the nation (or at least they said that up until the crash).

So English soccer is the place for foreigners to be, "but it is not a place for practitioners of money-ball," says Carlson.

This is one poker game where Americans start with the smallest pile of chips. Hedge-fund billionaire and Boston Red sox owner John Henry owns Liverpool (with a minority stake held by LeBron James). Sports entrepreneur and real estate magnate Stan Kroenke owns Arsenal. They count their billions in the low single figures as does the Glazer family, owners of the Tampa Bay Buccaneers and Manchester United.

Compare those sums to those at the disposal of Chelsea's Russian owner Roman Abramovich who is worth an estimated $21.2 billion. Then there is Sheikh Mansour, whose personal wealth is around $36 billion, backed by uncounted other billions through the Abu Dhabi United Investment fund.

No wonder the Glazers' are reportedly seeking to raise money via a flotation of United shares on the Singapore stock exchange. Earlier this year rumors circulated that a group in Qatar was looking to buy Man U. The Glazers may be rich by American standards, but in the new world economy that ain't rich enough to maintain your team's success.

It is about whether money can really buy happiness, or success, in sport.

Carlson points out, "Money isn't everything. The Yankees and Phillies have the biggest payrolls in baseball, neither is playing in the World Series. Money can only buy you a consistently winning team. It doesn't guarantee a championship."

City has certainly had its problems creating this culture. The team has had two managers in the three years since the Sheikh bought them. Their star striker, Argentine Carlos Tevez, who earns a reported 1 million pounds a month, is suspended after refusing to go into a recent Champions' league game as a substitute. Other superstars have been recruited from other teams for astronomical sums and dropped with equal rapidity.

"It’s not just the transfer market that City are currently in the progress of wrecking. Nor is it just the idea of player loyalty ... Or the fact that a club is doing its utmost to buy their way to success and thereby relegating the quality of football and of spirit to a secondary importance ... What City are also doing is ruining the careers of players."

Even life long fans of City like Rob Minshull find this new era difficult to get to grips with. "Regardless of the riches bestowed upon us by the Sheikh, it still feels strange to be winning."

But English fans regardless of who they support have to get used to the fact that foreign money is the future of the game they claim to have invented. Professor Chadwick, a Middlesborough fan, accepts that his club — owned by an English hotel magnate whose net worth is less than the cost of Roman Abramovich's yacht — will never win the Premiership or play in the Champions' League.

"The 21st century will be the Asian century in sport. That means significant state involvement in team ownership. It will be about winning but more about national identity."

Which raises the question: after the Sheikh, who will buy in next? Someone from Shanghai or Mumbai, perhaps?